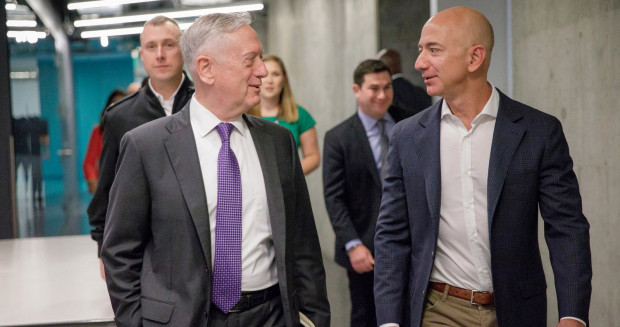 As Amazon continues to entrench itself as the nation’s commissary, huge government supply deals like the $53 billion Pentagon-Amazon procurement deal Congress is set to authorize leave little room for competitors and raise the specter of government-coddled monopoly.

The National Defense Authorization Act (NDAA) for fiscal year 2018, in addition to including passages involving regime change in Venezuela and exorbitant expenditures on the maintenance and expansion of American empire, continues to surprise: its latest draft includes a measure that will cement a multi-billion dollar deal between the Department of Defense (DOD) and the U.S. mega-corporation Amazon, run by the world’s richest man, Jeff Bezos.

If the NDAA is approved in its current form, which is highly likely according to experts, Bezos’ Amazon sets to gain $53 billion in revenue by becoming the chief supplier of an array of goods to the Department of Defense. The deal is laid out in a section titled “Procurement Through Commercial E-Commerce Portals,” in which the DOD would be required to purchase commercial off-the-shelf (COTS) products — such as office supplies — from “e-commerce portals” dominated by Amazon.

Though congressmen — including the NDAA’s author, Rep. Mac Thornberry (R-TX) — have asserted that there will be healthy “competition” among such portals, Amazon’s massive advantages in these markets are clear, particularly given how Amazon often overtakes markets on its own “free market” platform by edging out third-party vendors.

In addition, the Coalition for Government Procurement (CGP) stated in a memo issued last month that only one or two companies would be able to participate, given the parameters put forth by the current version of the bill. Several industry sources cited by Bloomberg stated that Amazon tops that very short list. The memo further argues that the current proposal is likely to “result in monopoly or duopoly control over access to the Federal market for commercial items.” Given that Amazon accounted for 43% of all online retail sales made in the U.S. last year, it is clear who stands to benefit most from this new, proposed federal acquisition model.

Indeed, Thornberry’s own words make it clear that the proposal is set up to disproportionately benefit Amazon. In June, Thornberry introduced this aspect by the NDAA by stating that “if you’re buying office supplies, you ought to be able to go on Amazon and do it.”

Thornberry’s preference for Amazon is hardly surprising, given that Amazon has poured millions of dollars into lobbying him and other Congressmen in recent years. In 2017 alone, Amazon has thus far spent $9.66 million dollars lobbying Congress, ranking it as the 15th biggest spender on Congressional lobbying for this year and is set to outspend other mega-corporations such as Dow Chemical and ExxonMobil. According to filings of one of the lobbying firms hired by Amazon this year, TwinLogic Strategies, Amazon explicitly lobbied Congress on the “modernization of the procurement process” in the second and third quarters of fiscal year 2017.

The corporate giant has also spent an additional $264,500 in direct contributions to current lawmakers, a figure that is likely to grow as the 2018 election cycle gets underway. With such “generosity” lavished upon Congress, Amazon’s efforts to “modernize” the federal procurement process in its favor are likely to be well received.

Amazon’s potential $53 billion deal with the Department of Defense will dwarf the retail giant’s prior deals with the federal government. In 2013, Amazon acquired a $600 million contract with the CIA, which later led to Amazon Web Services becoming the webmaster for the entire U.S. intelligence community. Since then, Amazon has been accused of “currying favor” with the intelligence community — as has The Washington Post, also owned by Jeff Bezos.

This year, Amazon has gained access to a much larger share of government spending. In January, Amazon won another contract with U.S. communities – a coalition of 90,000 local governments – in which it became the chief supplier of local government COTS products. In March, other federal agencies, such as the Department of Homeland Security, expanded their ties with Amazon into a “partner relationship” that nets the company about $450 million annually.

Currently, the U.S. AbilityOne Commission, a federal program that provides jobs to people with disabilities who sell products to government customers, is holding talks with Amazon Business representatives “to discuss opportunities to expand the selection of AbilityOne products online.” However, all of these deals are loose change compared to the potential $53 billion Amazon stands to gain annually from the Department of Defense.

Bezos’ personal connections with government are just as cozy. In 2016, he joined a Pentagon advisory board. In August of this year, he hosted Secretary of Defense James Mattis at Amazon headquarters in Seattle. This latest effort to further unite the Bezos’ business empire and the U.S. government has all the makings of a monopoly — one that both serves and is protected by the state – making it highly unlikely that any challenge to Amazon’s (and Bezos’) growing influence will come anytime soon.