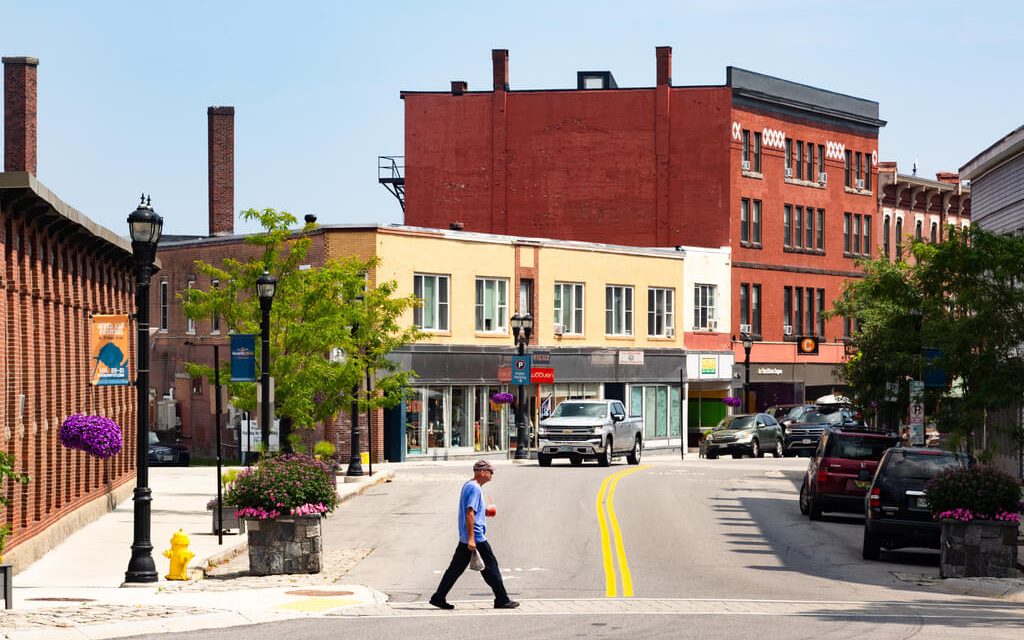 Above Photo: A man crosses the street in downtown Biddeford on a scorching Thursday, Aug. 12, 2021. Troy R. Bennett / BDN.

Biddeford, Maine — Duane Dennison knows more than most about the effects of hotter summers and heat lingering into the night: He lives near the Saco River in a tent community of about 20 people experiencing homelessness.

As temperatures soared into the mid-90s Aug. 12, the 61-year-old painter sought relief at the Seeds of Hope Neighborhood Center, which offers air conditioning, snacks and a place to socialize for up to 30 people at a time. His options to cool off in the summer are the cooling shelter, swimming in the river or hanging out at the local supermarket’s meat department.

“It’s harder in summer than the winter,” Dennison said of trying to stay comfortable outside.

Like many other Maine cities, Biddeford is regularly experiencing temperatures far higher than surrounding suburban and rural areas. On average, it is a little over 6 degrees warmer than its surroundings, about the same difference as in nearby Portland, according to an analysis from Climate Central, a nonprofit science and journalism organization.

That is because low tree cover and heat-absorbing infrastructure like roofs, buildings, pavement and parking lots trap more heat and release it slowly, creating a so-called urban heat island effect. But unlike other similar-sized cities, Biddeford is strategizing about how to minimize heat in the future by preserving and adding green spaces and using more porous surfaces.

Elevated temperatures can pose a threat to public health, especially older people, children and outdoor workers, contributing to their general discomfort and exhaustion, poor sleep and respiratory and heart problems. This urban heat and its health impacts are further aggravated by rising temperatures caused by heat-trapping pollution.

“[Climate change] is essentially raising that thermostat in the background,” Jeremy Hoffman, a climate scientist at the Science Museum of Virginia, said. “On top of that, you’re adding the urban heat island effect.”

Biddeford, Maine’s sixth-largest city with more than 21,000 residents, is located about 25 miles southwest of Portland in York County in the southern part of the state. The former textile mill city has undergone major redevelopment in the past decade to add upscale housing and retail stores. Mostly low-rise buildings and river breezes mitigate some of the heat, but the buildings have flat, dark roofs that trap the warmth.

The city has advanced climate and heat plans relatively quickly. In the fall of 2020 the city had already adopted a Climate Emergency Declaration Resolution, one of a handful of Maine municipalities to do so. It also formed the Biddeford Climate Task Force in January, charging it with creating a plan with adaptation, mitigation and sustainability strategies.

As that group looks at how climate change is affecting the city, it also is starting to look at ways to curtail heat buildup. Biddeford must consider current and future development carefully and preserve green spaces where carbon is sequestered, Steven Reiter, the task force’s chair, said.

The task force will consider adaptation strategies to mitigate the heat island effect, including rain gardens, tree planting and more porous surfaces for infrastructure, he said. It also is trying to educate the public.

Reiter said while taxpayers aren’t willing to shoulder many of the costs to invest in new or upgraded infrastructure, those costs will rise if mitigation efforts are delayed too long.

“If we do nothing, we’re in for a deep hurt,” Reiter said.

Increased daytime temperatures and reduced nighttime cooling can trigger exhaustion, stress and even heart attacks, especially among the elderly who don’t adjust well to sudden temperature changes, according to the U.S. Centers for Disease Control and Prevention. For Maine, which is the oldest state in the nation by median age, heat presents elevated risks. Some 36 percent of heat-related deaths in the United States are people over age 65.

Additionally, low-income groups that live in far more areas with concrete and marginal green spaces within cities face severe health threats, according to a joint investigation by NPR and the University of Maryland’s Howard Center for Investigative Journalism.

“Their neighborhood is already warmer,” Hoffman said. “In order to adapt, installing and using air conditioning units is a huge investment for people with less means.”

So far this summer, York County hospitals saw 33 heat-related emergency cases, with almost half of them occurring during the heatwave at the end of June, according to Maine Center for Disease Control and Prevention data.

As cities in Maine continue to grow and face higher temperatures, intense heat waves and stronger urban heat islands, heat-related health issues are likely to become more pressing going forward. Preparing for extreme heat events and protecting the most vulnerable will be key.

The city needs to step up its efforts following the Intergovernmental Panel on Climate Change’s report last week warning of widespread and intensifying climate change effects, said Mayor Alan Casavant, a lifelong Biddeford resident who recently read about the urban heat island effect in Portland and said his city must address the problem.

“Delay is not an option,” he said. “We have to come up with some plan of action for the community and hope that other communities are doing the same thing.”

That could provide more comfort for residents like Dennison, who is at the whim of the weather.