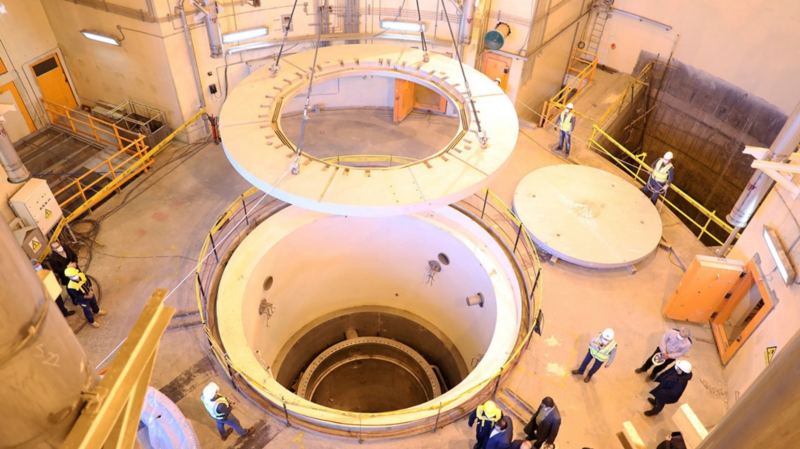 Above Photo: The waiver, rescinded by the Trump administration in 2020, covered the conversion of Iran’s Arak heavy water reactor. West Asia News Agency via Reuters.

A US State Department official says waiver needed to allow for technical discussions key to talks on nuclear deal return.

Talks will resume tomorrow in Vienna. This will be the last round.

We’ll see whether the US returns to the nuclear deal, or we end up with nothing, or perhaps even escalation.

The Biden administration has restored a sanctions waiver to Iran, a senior State Department official said, as indirect talks between Washington and Tehran on returning to the 2015 nuclear agreement entered the final stretch.

The waiver, which was rescinded by the Trump administration in May 2020, had allowed Russian, Chinese and European companies to carry out non-proliferation work at Iranian nuclear sites.

The waiver was needed to allow for technical discussions that were key to the negotiations about returning to the deal, formally known as the Joint Comprehensive Plan of Action (JCPOA), the State Department official said.

“The technical discussions facilitated by the waiver are necessary in the final weeks of JCPOA talks,” said the official, adding that even if a final deal is not reached, the waiver is important to holding discussions on the non-proliferation of nuclear weapons – of interest to the entire world.

The US steps on lifting sanctions are “good but not enough”, Iran’s foreign minister said on Saturday.

“The lifting of some sanctions can, in the true sense of the word, translate into their good will. Americans talk about it, but it should be known that what happens on paper is good but not enough,” Hossein Amir-Abdollahian was quoted as saying by ISNA news agency.

Iran’s security chief Ali Shamkhani reacted to the news on Saturday by saying that Iran has the right to a peaceful nuclear programme.

“Iran’s legal right to continue research and development and to maintain its peaceful nuclear capabilities and achievements, along with its security against supported evils, cannot be restricted by any agreement,” he tweeted.

The waiver announcement prompted hawks in Washington to accuse the Biden administration of giving concessions without securing any commitments from Iran.

Richard Goldberg, a senior adviser with the Foundation for Defense of Democracies (FDD), an American think-tank that supports sanctions on Iran, said the US should not support any level of Iranian nuclear activity.

“Opponents of JCPOA are the main supporters of nuclear proliferation. Period,” he tweeted, in reference to their opposition of a deal that seeks to curb Iran’s nuclear programme.

In a tweet to clarify its Friday move, State Department spokesman Ned Price said the move does not signify sanctions relief and is contingent on Tehran returning to its commitments under the nuclear deal.

“We did precisely what the last administration did: permit our international partners to address growing nuclear nonproliferation and safety risks in Iran,” he said in a tweet.

We did NOT provide sanctions relief for Iran and WILL NOT until/unless Tehran returns to its commitments under the JCPOA. We did precisely what the last Administration did: permit our international partners to address growing nuclear nonproliferation and safety risks in Iran.

Ryan Costello, policy director at the National Iranian American Council (NIAC), a Washington, DC-based group in favour of restoring the deal, said the waiver allowed other countries to help Iran convert its nuclear facilities to bring them into compliance with the JCPOA. That includes Iran’s Arak heavy water reactor, in particular, Costello said.

“I don’t want to say it’s a signal that [negotiations are] near the end, but I think it’s a sign that there’s progress, that the US wants to show that it’s making a good faith effort to restore the deal and overcome some of Iran’s hesitations,” he told Al Jazeera.

The US and Iran have been negotiating indirectly in Vienna to revive the deal, which saw Iran scale back its nuclear programme in exchange for lifting international sanctions against its economy.

Former US President Donald Trump withdrew Washington from the accord in 2018 and started a “maximum pressure” campaign of sanctions against Tehran, which responded by advancing its nuclear programme well beyond the limits set by the JCPOA.

US President Joe Biden has pledged to restore the deal, but several rounds of talks in the Austrian capital have failed to secure a path back into the agreement so far.

Biden and his top aides have also warned that the window of opportunity for salvaging the deal is closing down, with Iran gaining irreversible nuclear know-how.

Earlier this week, a senior State Department official told reporters that the negotiations are entering a make-or-break phase, with only a “handful of weeks” left for a chance to restore the agreement.

“We are in the final stretch because, as we’ve said now for some time, this can’t go on forever because of Iran’s nuclear advances,” said the official, who spoke on condition of anonymity. “This is not a prediction. It’s not a threat. It’s not an artificial deadline.”

The US administration says preventing Iran from acquiring a nuclear weapon is one of its foreign policy priorities, but Tehran has denied it is seeking nuclear weapons.

The State Department official said on Friday that restoring the waiver was not a signal Washington was about to reach an understanding to return to the deal, however.

“Absent this sanctions waiver, detailed technical discussions with third parties regarding disposition of stockpiles and other activities of non-proliferation value cannot take place,” the official said.

The waiver covered the conversion of Iran’s Arak heavy water reactor, the provision of enriched uranium for its Tehran Research Reactor, and the transfer of spent and scrap reactor fuel abroad.

Then-US Secretary of State Mike Pompeo revoked the waiver in May 2020, almost two years after Trump quit the deal.

Barbara Slavin, an Iran expert at the Atlantic Council, said the resumption of the waiver was a positive step.

“It’s a necessary prerequisite to restoring the JCPOA and thus a good sign that this can be accomplished,” she told the AFP news agency. “These sanctions were among the dumbest and most counterproductive imposed by the former administration,” she added.