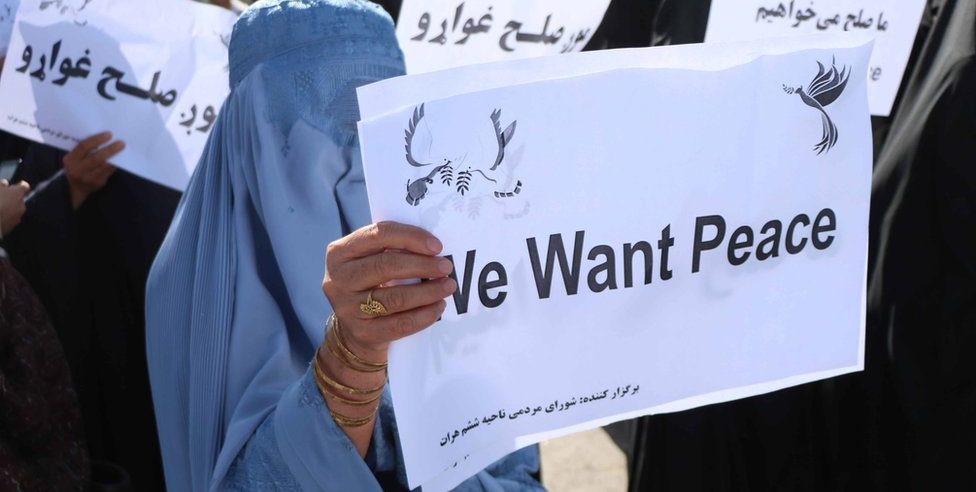 Above photo: Afghans have held rallies in support of the fragile peace talks. EPA.

Members of the Black Alliance for Peace (BAP) criticized U.S. President Joe Biden’s announcement Wednesday that he would pull troops from Afghanistan on September 11, 2021, thereby violating a key component of a peace agreement negotiated by the previous administration.

A September 11 withdrawal—landing on the 20th anniversary of the 9/11 attack—reinforces the false impression that the Taliban government had something to do with the September 11, 2001, attacks in the United States.

BAP is concerned the attempt to move the date of U.S. withdrawal past the agreed-upon May 1 deadline will give hardliners in the Biden-Harris administration the opportunity to create the conditions for continued U.S. occupation of Afghanistan by baiting the Taliban into renewed attacks.

“The Taliban now has announced it will not participate in any peace talks because the United States is not abiding by the 2020 U.S.-Taliban agreement hammered out in Doha,” said National Organizer Ajamu Baraka. “Talks between the Taliban and the Afghan government were set to take place this month in Turkey. Now those talks are an impossibility.”

BAP has detailed how powerful forces within the administration and among the foreign policy elite are trying to find ways to keep a U.S. military presence in Afghanistan to support broader geostrategic objectives, primarily countering Chinese influence.

NATO coalition forces also are expected to begin withdrawing from Afghanistan, but it is unclear when all NATO forces would leave.

As an internationalist organization, BAP wonders where else U.S. troops will be sent as the cold war on China is ramped up, Russia continues to be agitated and Africa remains a hotbed for U.S. military activity. We question if devastating sanctions would be slapped on the people of Afghanistan after a U.S. pullout, as in the cases of 1970s Vietnam and Iraq after the 1990s bombing campaign.

While Biden only acknowledged U.S. casualties, we will raise up the 100,000 Afghan deaths, and countless injuries and permanent disabilities. Many Afghans had been forced to flee their country because of the war, while others have been internally displaced.

BAP has consistently demanded U.S. adherence to the Doha peace agreement. BAP even organized an International Day of Action on Afghanistanon April 8 to help raise the public’s awareness on the issue.

“We understood the Biden-Harris administration probably had made up its mind about withdrawal before April 8,” said Solidarity Network Coordinator Julie Varughese. “But the point was to help raise the public’s awareness, so a movement could begin to develop in the United States that could end U.S. imperialism in its tracks.”

BAP continues to demand the United States and NATO pull all troops and contractors, and end all involvement. And we insist the United States respect the human rights of the Afghan people and colonized people the world over, including inside its borders.