Above photo: Celebration of 40th anniversary of the Sandinista Revolution. Nicaragua Solidarity Campaign.

A clever trick of propaganda is to introduce false information as a precept to an argument with what seems like a valid conclusion. Those who agree with the conclusion will likely accept the false precept without even questioning it.  This tactic was used for a recent series of articles in the Washington Post aiming to discredit the government of Nicaragua led by the Sandinista Party. The Post argued that since the ruthless dictator of Nicaragua was torturing its citizens, the US should give them refuge in the US, but instead they were deported by the Trump Administration.  Democratic members of Congress immediately signed a letter asking Trump to let the Nicaraguans take residence in the US, and Biden who seldom takes a side on any issue lately, released a statement on Twitter.  He chastised the Trump Administration for sending back Nicaraguan asylum seekers fleeing oppression from the tyrannical grip of Daniel Ortega (Nicaragua’s elected President) without a chance to pursue their claims.  Another trick of good propaganda is to state so many lies that the reader doesn’t have time to investigate all of them. 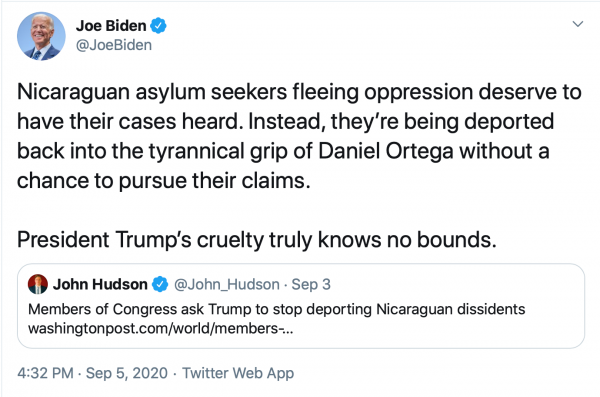 This tactic was designed for those observers who are sympathetic to the plight of immigrants but know very little about Nicaragua or other Central American countries.  Most Americans do not even know the intent of the argument, let alone know what is true or not.  It is difficult to know about all the countries in the world, and even more so considering the constant repetition of false information by the media and the censorship of accurate information from mainstream channels.

Do they think this story is about standing up to help immigrants? Do they think Biden or the Washington Post care if a few immigrants are given asylum in the US?

This story was constructed to convey false information and make people believe it without questioning. The story isn’t even about immigration at all.  People believe information that supports what they already believe, especially when they are emotionally connected. If you want people to be able to seek asylum to flee dictatorial regimes, you may believe that Nicaragua is a tyranny that is sending thousands of immigrants to the US. If you want to believe Biden would be more humane than Trump, you may remember that Biden stood up for those fleeing persecution in Nicaragua.  But what false information did you accept?

These stories make readers assume there are a lot of immigrants coming from Nicaragua. In fact, there is virtually no immigration from Nicaragua right now. There is a lot of immigration from Honduras, El Salvador, and Guatemala, which all have governments that many would call tyrannical.  The government of Honduras was put in power by a US-backed coup to overthrow the previous democratically-elected President. El Salvador and Guatemala have neo-liberal governments that promote small government and privatization, which happen to align well with US corporate and government interests.  All of these countries are rife with violence and poverty and political repression.  In contrast, there is no mass migration from Nicaragua despite cruel US economic sanctions and a recent US-backed coup attempt.  Immigration from Nicaragua remains low because the conditions for the poor are bearable with free public education, free healthcare, a growing economy, and the lowest violent crime rate in the region.

The stories of refugees coming from Nicaragua convey that Nicaragua is a tyrannical regime even though no evidence was provided. Those who believe immigrants should be allowed to migrate from any country in which they do not feel safe are sympathetic to those who say they are punished for their political activities. Those sympathies are manipulated by the press to make readers believe the Nicaraguan government punishes dissidents. Critical thinking is suspended.

There are people in Nicaragua who claim the government is a tyranny, but there are many who claim just the opposite. The US press only portrays the former, but when I traveled in Nicaragua I found many of the latter.  I can’t prove one way or the other that some people who claim to have been mistreated are telling the truth, but I can say there are many people who stand by the Nicaraguan government and who say that some of those accused of murder or arson in association with the 2018 coup attempt were rightfully tried and some were justifiably incarcerated.  I also observed a country where news media presented a very wide range of opinion including a lot of corporate media siding with the US government. In contrast, no corporate news outlet in the US would ever show the side of the Nicaraguan government or even the opinion of the civic leaders of unions, youth or women’s organizations, or solidarity organizations.  It seems unlikely that a country that allows opposition news outlets to operate openly is much of a tyranny, but I’m not so sure that the country that controls the narrative so tightly isn’t a tyranny.

Most of the immigrants coming from Central America are fleeing the governments the US has been supporting, and not the government the US has been trying to overthrow. Without giving the statistics, the news media tries to paint the opposite picture with the motive of justifying US intervention.  What these clever stories in the US press are really about is justification for a US foreign policy that props up governments that keep land and labor costs low for US corporations, and overthrows governments that serve the interests of their people over US corporate profit.  The fact that Biden and the Democrats are willing to participate in this deception also reveals that it’s really about how Biden will continue to support the same foreign policy in Central America. The corporate news media is planting the seeds for more US military intervention in Central America and Biden will be a willing commander.