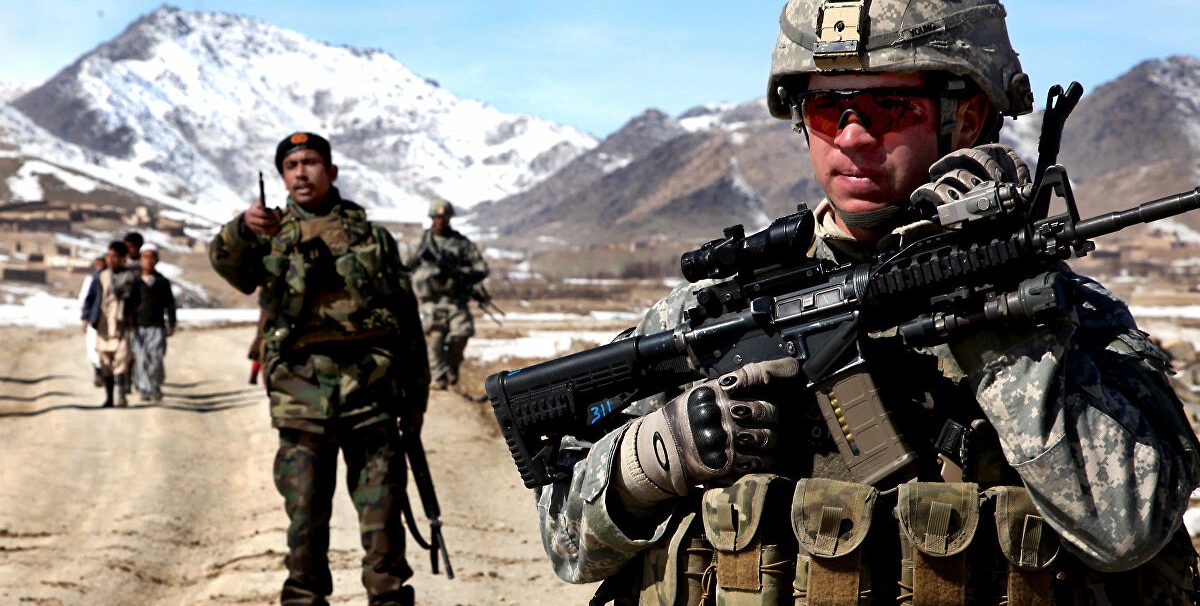 Above photo: Patrol in Afghanistan. US army.

President Joe Biden’s administration is the sixth one to have presided over the 20-year US war in Afghanistan. And he is the fourth president to have overseen America’s “longest war”.

Two previous presidents, Obama and Trump, promised to end the “forever war” and both left office without fulfilling that aspiration.

So there is fair reason to view with skepticism Biden’s vow this week to withdraw all US troops from the Central Asian war-torn country – known as the “graveyard of empires” – by September.

Currently, there are 2,500 US troops in Afghanistan along with 9,600 other NATO soldiers. That’s a fraction of the numbers a decade ago when the war was at its height. Washington and its NATO allies agreed this week to all pull out residual forces by September in an “orderly” exit.

This delays an earlier withdrawal date – next month – that the Trump administration had negotiated with the Taliban enemy in a deal struck last year. The Taliban aren’t happy about the US missing the deadline and the delay might suggest America procrastinating on its eventual departure.Nevertheless, the indication is Biden wants to wrap up the war by definitely pulling American boots out of Afghanistan. The main reason is less to do with Afghanistan and more to do with confronting China and Russia.

First of all, there is the hype about “job done”. Biden claimed this week that the US defeated the Al Qaeda terror group in Afghanistan and had eliminated its leader Osama bin Laden back in 2011. There was no reason to stick around any longer, he said.

Secondly, Biden is linking the withdrawal of troops to the 20th anniversary of the 9/11 terror attacks on New York City and the Pentagon. That linkage is meant to convey the public image that the United States ostensibly completed its mission of avenging those American deaths.

Many observers will not buy Biden’s implied claims of “accomplishment”. Indeed, such a notion is preposterous and grotesque given the reality of criminality and catastrophe of the war in Afghanistan.

More US and NATO troops were killed in the war than American citizens on 9/11. Over 20,000 casualties were incurred by US forces in a war whose original pretext was dubious.

More than 43,000 Afghan civilians are estimated to have been killed in war-related violence,  many of them from US airstrikes and deadly night raids on villages by special forces. The total death toll stands at more than 157,000.

Biden’s hype about “war over” is really just a facade to cover the disgrace of American failure and near-destruction of a nation. The fact is the Americans lost, and the Taliban won, if we measure by who is left standing. But the contrived American narrative infers that the US desperately wants out of a quagmire it created at the cost of trillions of dollars.

Another indicator is Biden’s announced withdrawal comes with “no conditions”. It is an unconditional retreat, meaning the Americans have been beaten to a pulp and have no leverage. The Taliban will easily push aside the US-installed regime in Kabul once the Americans and their NATO partners bail out. And by saying “no conditions”, Biden is really saying to the Taliban, “Do what you want, we just want out (just don’t shoot at us as we leave though).”A further sign of US determination to get out of Afghanistan came from Biden’s announcement this week that America needs to prioritise bigger challenges. In particular, he mentioned the “rise of China” as an adversary to US power.

“We have to shore up American competitiveness to meet the stiff competition we’re facing from an increasingly assertive China,” Biden told the nation, adding: “We’ll be much more formidable to our adversaries and competitors over the long term, if we fight the battles for the next 20 years, not the last 20.”

Since Biden became president three months ago, he has ramped up hostility toward China and Russia with blistering speed. It is clear that the imperial planners in Washington realize that in order to cope with what they call “great power rivalry”, the US needs to conserve its resources for warmongering elsewhere.

That’s why Afghanistan is being dropped like a blood-soiled rag. Not for any regretful moral reason, or sense of war weariness. It’s all about Washington consolidating its belligerent efforts against China and Russia.