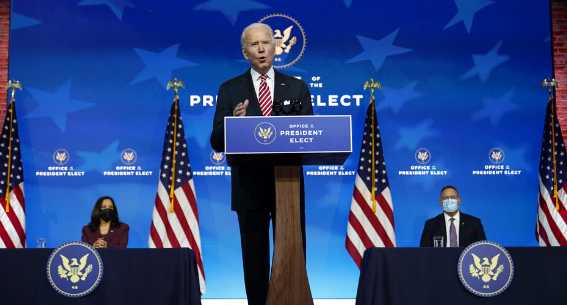 Now his administration appears to be trying to overturn a ruling that helps those bankrupted by student loans.

Despite increasing pressure to fulfill a campaign promise to forgive student debt, President Joe Biden is now going in the opposite direction: His administration has taken an initial step to try to overturn a key legal victory for borrowers, according to court filings reviewed by The Daily Poster.

If the administration wins an appeal, it could bolster a legal precedent against millions of debtors being crushed by bankruptcy laws that Biden infamously helped his finance industry donors sculpt during his four decades in Washington.

On January 14, a federal judge in Biden’s home state of Delaware moved to eliminate nearly $100,000 in student loan debt held by a 35-year-old epileptic man. In response, the Justice Department filed a notice of appeal in the case on behalf of Education Secretary Miguel Cardona.

If Biden officials now follow through with a fully formed appeal, they would not only be aiming to keep this man overwhelmed with debt, but also moving to solidify a legal interpretation that could preclude even the most beleaguered student debtors from getting relief through bankruptcy courts.

“In light of the administration’s commitment to reforming the process for student loan borrowers in bankruptcy, it is both surprising and disappointing to see that they appear to be backtracking,” Dan Zibel, Vice President and Chief Counsel for the National Student Legal Defense Network, a nonprofit that represents students in cases related to education and student debt, told The Daily Poster. “With bipartisan calls to lower the bar for borrowers seeking relief from student loans in bankruptcy, the Department should not be arguing in court to raise that bar.”

The legal maneuver comes more than six years after the Obama administration called on Congress to make it easier for some borrowers to discharge their student loans through bankruptcy.

Over the last four decades, Biden has led the fight against initiatives to reduce student debt. As a senator from Delaware, Biden sculpted the laws that have made it so difficult for Americans to reduce their student debts in bankruptcy court.

On the presidential campaign trail, Biden appeared ready to take a new position on the matter. He promised to make it easier for people to reduce their student debt through bankruptcy proceedings, and to “immediately cancel a minimum of $10,000 of student debt per person.”

But instead of doing so, his Justice Department is moving to further entrench legal precedent against borrowers.

“His Inability To Pay His Student Loan Debt Will Persist”

In the Delaware case, a bankruptcy judge found that Ryan Wolfson, who held nearly $100,000 in student loan debt, faced “undue hardship” due to the debt and eliminated all of it. According to the lawsuit, Wolfson graduated from Penn State in 2010 and struggled to find full-time employment. In 2019, while Wolfson was working full-time driving for Uber, Lyft, and Grubhub, he suffered a seizure while driving and totaled his vehicle.

“The evidence shows that, despite considerable effort, Wolfson has been chronically un- or underemployed since graduating from college; that his sporadic full-time employment has consisted of low-paying gig work or jobs with little prospect of advancement; and that he has avoided living in abject poverty only through significant financial support from his father,” the judge wrote in her opinion. “The record further shows that Wolfson’s career prospects are unlikely to materially improve over time, and thus, his inability to pay his student loan debt will persist.”

Not only did the court discharge Wolfson’s debt, but the judge’s decision also departed from other bankruptcy courts which have been hesitant to find “undue hardship” in cases related to student loans, and have rarely ruled in favor of the debtors.

Student debt is typically exempt from bankruptcy cases unless borrowers can prove that they face “undue hardship” as a result of their debt, a higher standard than almost all other types of consumer debt. Federal circuit courts have interpreted this language in different cases to demand that debtors show a “certainty of hopelessness” or “intolerable difficulties” or “a total incapacity to repay.”

That higher standard is in part thanks to Biden himself, who as a senator spearheaded a law in 2005 that made it more difficult for student debtors to claim bankruptcy for private loans. About half of Wolfson’s debt was held by a private loan provider, and half by the federal government.

When those like Wolfson file for bankruptcy, they must undergo a separate process to address their student debt, known as an adversary proceeding. In an adversary proceeding, debtors must sue their student loan lenders and prove they face “undue hardship” as a result of the loans. In this case, the creditors are the federal government and Educational Credit Management Corp., a private loan collection service that has long been “the main private entity hired by the Department of Education to fight student debtors who file for bankruptcy on federal loans,” according to the New York Times.

In Wolfson’s case, Judge Laurie Selber Silverstein wrote in her opinion that the federal courts have been far too strict in their interpretation of “undue hardship” and their application of the Brunner test, a test developed in a 1987 U.S. Supreme Court case to assess undue hardship.

“In short,” she wrote, “I agree with the general premise that the most exacting interpretations of Brunner are unmoored from the original test and the plain language of ‘undue burden.’”

Silverstein is one of a handful of judges to have issued recent rulings that take a less stringent approach to undue hardship.

By beginning the appeal process and bringing the case into federal district court, the administration could help to entrench harsher interpretations of Brunner and prevent rulings like Silverstein’s from setting a precedent for a broader interpretation. A district court ruling, while not binding on future Delaware bankruptcy decisions, could influence judges’ decisions in other cases in and around Delaware.

After campaigning on a promise to cancel at least $10,000 in debt for student loan borrowers, Biden has retreated from that pledge, putting him at odds with top Democratic lawmakers.

In its first year, the Biden administration also routinely fought such attempts by people who hold student debt to have it relieved in bankruptcy court.

Soon after Biden took office, his administration said that the Education Department was reviewing its authority to cancel student debt through executive order. For months, the administration claimed that such a legal review was ongoing. But a public records request filed by the Debt Collective, an organization pressuring Biden to cancel student debt, revealed that the Education Department had completed its review in early April 2021.

The memo detailing the administration’s legal authority was highly redacted when released in response to the public records request, and top Democrats are now calling on the administration to release an unredacted version.

The Justice Department and Education Department have also claimed to be reviewing their own policy of fighting student borrowers in bankruptcy cases.

Part of the problem may be that Assistant U.S. Attorney Jacob Laksin, who filed the appeal in Wolfson’s case, was appointed by a Trump holdover in the Justice Department.

“The blame could fall to [Attorney General Merrick Garland], as the attorney general is supposed to appoint assistant U.S. attorneys,” explained Hannah Story Brown, a researcher at the Revolving Door Project, an executive branch watchdog. “But they can functionally be appointed by their local U.S. attorney — who in Laksin’s case is Trump appointee David Weiss, the only Trump-appointed U.S. attorney not asked to resign when Biden took office.”

“This underscores the necessity of de-Trumpification at the Department of Justice: the conservative subordinate of a Trump-holdover is pushing Biden’s education agenda in a cruel and nonsensical direction,” she added.

Meanwhile, a bipartisan coalition of senators has been working to reform bankruptcy laws in a way that would be favorable to student debtors. Reforming these laws has been a longtime crusade of Sen. Elizabeth Warren (D-Mass.), who has been a staunch critic of Biden’s support for legislation that made it more difficult for debtors to triumph in bankruptcy proceedings.

Warren previously attributed Biden’s support for those laws to his coziness with the financial industry.

“His energetic work on behalf of the credit card companies has earned him the affection of the banking industry and protected him from any well-funded challengers for his Senate seat,” she wrote of Biden in 2002.

Warren has introduced legislation to treat student loans in bankruptcy cases with the same legal standard as other types of consumer debt. She, alongside Senate Majority Leader Chuck Schumer (D-N.Y.) and other Democratic lawmakers, have also been pressuring Biden to cancel at least $50,000 worth of student debt for federal student loan borrowers.

In August, the Senate Judiciary Committee, led by Sen. Dick Durbin (D-Ill.), convened a hearing to explore reforms to bankruptcy laws on student loans. During the hearing, Durbin and Sen. John Cornyn (R-Texas) introduced a bill that would allow student debtors to discharge their federal student loans through bankruptcy proceedings after ten years of holding the debt, rather than requiring them to meet the standard of “undue hardship.”

Even the insurrectionist Sen. Josh Hawley (R-Mo.) supports the legislation.

“I can’t think of very many good reasons to keep students with massive amounts of debt as lifelong serfs of banks and universities by not allowing them to discharge in bankruptcy their debt under appropriate circumstances,” he said.

The Biden administration would apparently beg to differ.