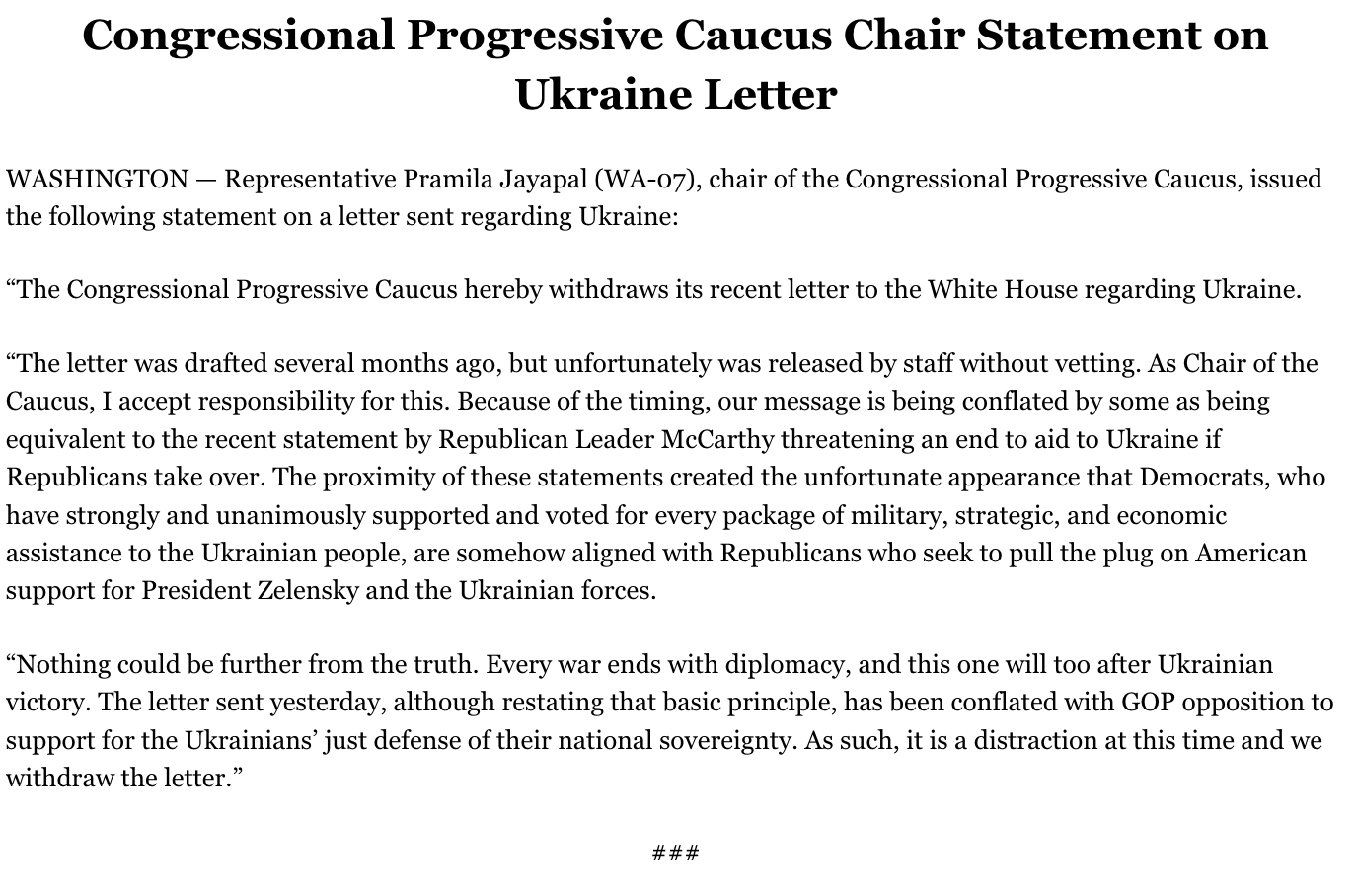 Biden Orders Progressives To Denounce Themselves On Ukraine

Progressives made a mealy mouthed appeal to Biden to engage in talks regarding Ukraine.

“But as legislators responsible for the expenditure of tens of billions of U.S. taxpayer dollars in military assistance in the conflict, we believe such involvement in this war also creates a responsibility for the United States to seriously explore all possible avenues, including direct engagement with Russia, to reduce harm and support Ukraine in achieving a peaceful settlement.” October 24, 2022 letter from congressional progressives to Joe Biden

Congressional “progressives” are cowards and charlatans. They may actually believe in some of what they claim to espouse but at the end of the day they are more opportunistic than anything else. They have carved out a niche for themselves in certain parts of the country where voters are in fact progressive and want to see their political ideology put into practice. But good luck ever seeing that when the leader of the Congressional Progressive Caucus makes a fool of herself and her members when they didn’t have the courage of their very slim convictions.

On October 24, 2022, the House Progressive Caucus released a letter  to president Biden that was signed by Chairwoman Pramila Jayapal and 29 other members. The letter stated that Vladimir Putin is evil, and Ukrainians are noble, and rehashed every nonsensical pro-war trope created since Russia’s special military operation began in February 2022. They reiterated their support for giving billions of dollars to the military industrial complex and the Ukrainian coup regime, but they also asked Biden to consider negotiating with Russia to end the conflict.

It could have been a small step towards congress reasserting itself and living up to its responsibility to represent people in this country. The one step forward and two steps back statement gave them the opportunity to show leadership and legitimized talk of peace, which is what millions of people want.

The potential presented in the letter was precisely why the White House smacked down the tepid request. If members of congress begin to question the war propaganda narrative the rest of the public may work up their courage too. The anti-war movement might become stronger, and some members of congress might actually grow a spine. All of these scenarios are anathema to the bipartisan war party and because of that Congresswoman Jayapal retracted the letter 24 hours later, claiming that it hadn’t been properly vetted by staff.

In recent weeks a group of LaRouche party members publicly confronted Alexandria Ocasio-Cortez and Jamaal Bowman, two of the signatories, and asked why they have voted to fund the Ukrainian regime which is controlled by neo-Nazi and other right wing forces. It is a good question, regardless of who asks it. So weak is the anti-war left that the site of even a right wing group asking questions sparked the dormant desire to speak up themselves. The targeted members were searching for a way out of their predicament, and issuing a statement which both supported the administration but which also claimed they sought peace seemed like an expedient solution.

In addition, the republicans were beginning to look like they might claim the mantle of peacemaker. Donald Trump said that negotiations should take place and republican House leader McCarthy made mention of ending Ukraine’s “blank check.” No one knows if McCarthy was serious but the progressives needed better optics and released the letter.

Fears of a hot war between Russia and the U.S. have grown, as Joe Biden recklessly speaks of “nuclear armageddon .” His friends in corporate media try to convince us that Putin has done likewise, although the Russian president is far more adept and made no such statement. It is an understatement to say that Biden does not inspire confidence at a perilous moment. After some $70 billion given to the military industrial complex and the Ukrainian coup regime, there is no end in sight.

Russia has upped the ante by mobilizing 300,000 more troops, claiming Ukrainian territory as its own, Ukraine blows up bridges and may have planned to use a so-called “dirty” nuclear material device to escalate the conflict. European nations are hoping for a mild winter because their Russian gas connection has been cut. Their people are in revolt, and the UK has had three prime ministers in less than two months because the economic war of attrition meant to damage Russia has damaged that nation instead. Of course, everyone with common sense knows that the U.S. was involved in the damage done to the NordStream 1 and 2 pipelines which were built to send Russian natural gas to Europe. All of these complications pushed the envelope and gave the insincere so-called progressives a nudge in the correct direction.

The progressives were right to stick a toe in the water, but shouldn’t have done so unless they were willing to fight their own leadership. Obviously they were not, as their feckless chairwoman gave in to the White House and stabbed her members in the back, embarrassing them and herself too.

This fiasco is yet another reminder that the left in this country had better start speaking up for themselves. The democrats are the party of war and will not allow even a tiny expression of dissent. Some of the letter signatories have fallen on their swords, yelled loud mea culpas and joined in condemning themselves. Others are silent after having stepped out only to be stepped upon.

No one should think that help is coming from Washington. The U.S. involvement in Ukraine will end with negotiations or with a hot war. That determination will not be made by Pramila Jayapal or anyone else in congress who calls themselves progressive.