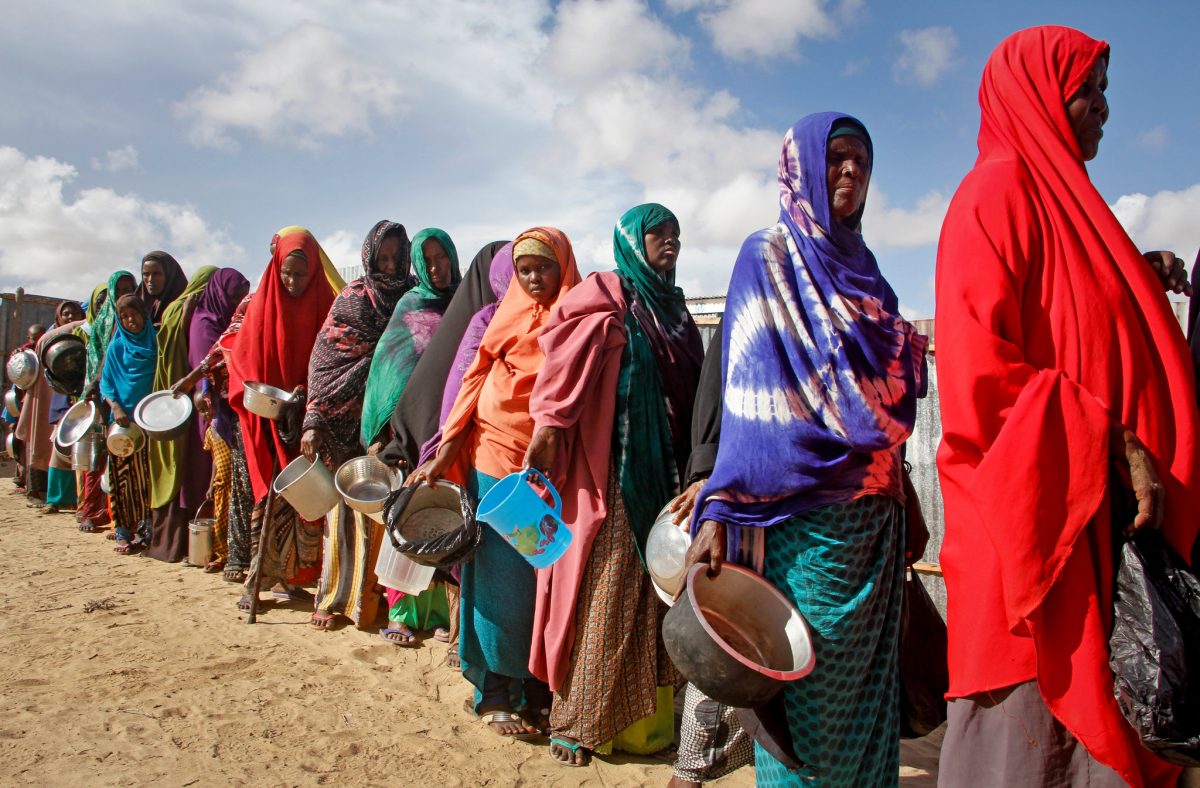 Above photo: Women lined up for food at a camp outside Mogadishu, Somalia, after fleeing drought-stricken areas, 2019. Farah Abdi Warsameh/Associated Press.

Military options by Washington are primary in the Horn of Africa and Eastern Europe.

President Joe Biden of the United States has announced through the Department of Defense the redeployment of Pentagon troops to the Horn of Africa state of Somalia.

This is not the first time that U.S. troops have been sent into Somalia due to the strategic geopolitical significance of the country as an oil producer and oceanic gateway to critical trade routes within the world economic system.

The redeployment in Somalia coincides with the escalation of a Washington-engineered war in Eastern Europe over the expansion of the North Atlantic Treaty Organization (NATO) and efforts designed to weaken the Russian Federation. Secretary of Defense Lloyd Austin III and Secretary of State Antony Blinken in a surprise visit to Kyiv, the capital of Ukraine, on April 25, emphasized the objectives of Washington and Wall Street in the funding of a conventional war in the region.

Somalia and other East African states are facing the worst drought in sixty years due directly to climate change. However, the humanitarian crisis which is rapidly increasing in Somalia, Kenya and other states, has been largely ignored by the U.S.-based corporate and government-controlled media whose resources are exclusively being utilized for the purpose of generating public support for the imperialist intrigue in Eastern Europe.

Although the Ukraine military and civil society is thoroughly infiltrated by neo-nazi political groupings and militias, the people of the U.S. are being told that President Volodymyr Zelensky is a paragon of democratic practice in the geopolitical area and that the only solution available to working and oppressed peoples is to line up behind the White House and the Congress in funding the continuation of the war. The Ukraine policy of the Biden administration is costing the people of the U.S. on a daily basis where the prices of gasoline, food, transportation, housing and other essentials are rising astronomically.

In addition, the precipitous decline in the stock markets in New York City illustrates the uncertainty of the ruling class as it relates to the domestic and foreign policy of the Biden administration. Consequently, the militarized response to the global decline can only imperil the lives of billions across the world.

The drought in East Africa, Somalia in particular, can only be addressed through the adequate humanitarian assistance coupled with diplomatic initiatives to resolve the persistent internal conflict which are fueled by U.S. foreign policy. Nonetheless, the recent political governance crisis in Somalia which led to the re-election of President Hassan Sheikh Mohamud, is obviously connected with the redeployment of U.S. troops. The presence of the U.S. Africa Command (AFRICOM) in Somalia and across East Africa, has not brought stability and development to the region.

According to a report published by Daily Sabah, it notes: “In the midst of the COVID-19 pandemic, Somalia is suffering one of the worst droughts in a generation after three successive poor rainy seasons and harvests. The food shortage has reached crisis proportions in the country and an unrelenting surge in food prices is fueling inflation. According to the U.N., ‘the drought could leave 4.6 million people without enough food by May 2022.’ When drought strikes Somalia, many people recall the horror of the 2011-2012 famine. The death toll was staggering. An estimated 258,000 people, half of them children, lost their lives during that period. But is nature the main culprit for Somalia’s famine?

A State Department press release for May 16 issued under the name of Secretary Antony Blinken, praises the installation of President Hassan Sheikh Mohamud claiming that it will foster stability and economic development in the country. Yet, there is no mention of the further militarization of the Somalian state at the aegis of the Biden administration.

U.S. military personnel have engaged in drone attacks and other bombing operations in Somalia since the period of 2006-2007, when the previous administration of President George W. Bush, Jr. encouraged the-then governments of Ethiopia and Kenya to intervene in the internal affairs of Somalia. Today, the political situations in Ethiopia and Kenya have undergone transitions which have not always benefited the foreign policy imperatives of the U.S. and its allies in the European Union (EU).

The formation of the African Union Mission to Somalia (AMISOM) in 2007 has served the interests of successive U.S. and Western European administrations. Funding for AMISOM has been provided by the U.S. and other NATO countries along with the United Nations. Every year the presence of AMISOM has been renewed by the UN, although in 2022, the operation has been reconfigured in order to further carry out its military mission.

Although AMISOM has been funded, trained and provided with diplomatic support by the NATO states, the overall security situation in Somalia has not improved. Al-Shabaab, an armed Islamist rebel group, has continued to launch bombings and other deadly attacks against government installations, AMISOM bases and civilians not necessary involved in the political structures in the country.

Moreover, there was a direct U.S. and UN military occupation of Somalia between 1992-1994, when many resistance forces mobilized to drive the foreign military units out of the country. In fact, the recent pre-occupation with Somalia by the U.S. government can be viewed as a continuation of the efforts by imperialism stemming from the late 1970s. During this period, the administration of former President Jimmy Carter encouraged the Somalian government of Gen. Mohamed Siad Barre, which had suddenly shifted allegiance from the Socialist countries to Washington, to invade the Ogaden province of Ethiopia in order to break away the area so that it could ostensibly join Somalia.

These efforts in 1977-78 were an abysmal failure. The Cuban Internationalist forces were present in Ethiopia under the Dergue and assisted the armed forces of Col. Mengistu Haile Mariam to decisively defeat the U.S.-backed invasion by Somalia. By 1991, the Siad Barre regime had collapsed leading to a period of instability which has lasted for more than three decades.

In the most recent period under former U.S. President Donald Trump, AFRICOM ground troops were withdrawn from Somalia. The Biden administration has reversed the decision by his Republican predecessor based upon an assessment made by the Pentagon and the Department of State in Washington.

AFRICOM in a recent report published on May 16 affirms the holding of a summit involving numerous U.S. governmental agencies in neighboring Djibouti, the location of Camp Lemonnier, a Pentagon and French military base where thousands of imperialist troops are stationed. Overall AFRICOM has thousands of its forces on the continent with its highest concentrations in Djibouti and other makeshift bases in West Africa.

According to AFRICOM: “Maj. Gen. William Zana, commander, Combined Joint Task Force – Horn of Africa (CJTF-HOA), hosted the forum, which provided a face-to-face platform for representatives with the U.S. Departments of State and Defense, U.S. Agency for International Development, and National Security Council. The discussions ranged from overarching long-term strategy to specific security threats in the region. More than 50 U.S. government interagency officials working in more than 10 countries throughout East Africa met together in Djibouti for the 2022 East Africa Security Forum on May 11, 2022…. ‘Africa is home to a complex security environment – ripe with opportunity and challenges alike. This is especially true in East Africa,’ said U.S. Army Gen. Stephen Townsend, commander, U.S. Africa Command. ‘Al-Shabaab, the largest, wealthiest and most lethal al-Qaeda affiliate in the world, continues violent attacks like the one in Ceel-Baraf last week. Left unchecked, violent extremists and other security challenges will continue to put East Africa at increasing risk. These challenges, including democratic backsliding, conflict, drought and famine, are exactly why the East Africa Security Forum exists.’”

Nonetheless, even prior to the existence of al-Shabaab and even al-Qaida, the Pentagon has sought to dominate the Horn of Africa region. As the rationale for intervention in Ukraine is being questioned and opposed by genuine anti-imperialist movements internationally, so should the latest announcement by the Pentagon of a redeployment to Somalia should not only be treated with skepticism it should be opposed as an act of solidarity with the peoples of Africa.

U.S. war policy in Ukraine and Eastern Europe has prompted hyperinflation, food deficits and economic underdevelopment around the world. The recent diplomatic and military maneuvers in the Horn of Africa as well will prove detrimental to the people of the region and indeed throughout the world.