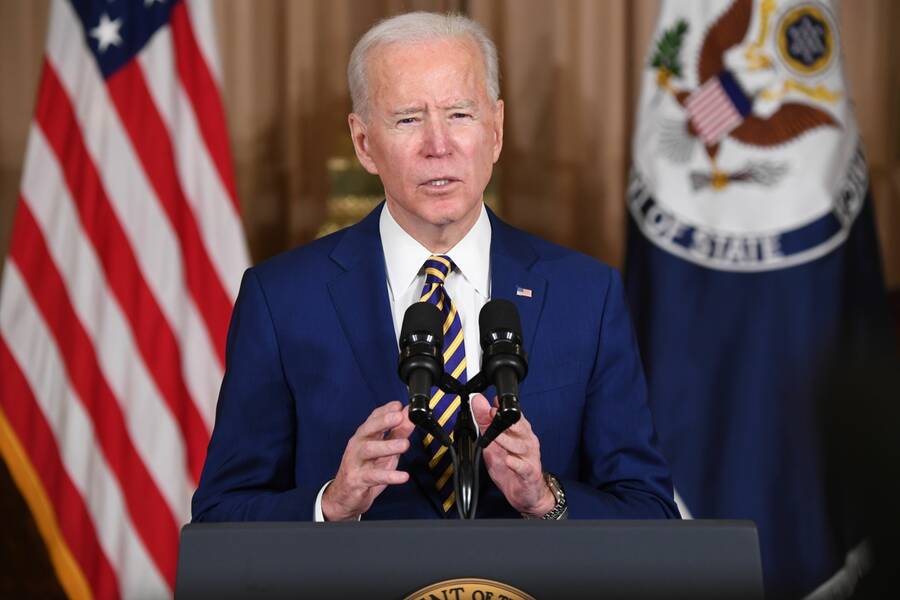 Above photo: President Joe Biden speaks about foreign policy at the State Department in Washington, D.C., on February 4, 2021. Saul Loeb/AFP via Getty Images.

But It’s Too Soon to Celebrate.

The details of Biden’s Yemen war announcement are what matter. Those are still not clear.

The February 4 announcement by National Security Advisor Jake Sullivan that President Biden would end U.S. support for ​“offensive operations” in Yemen was understandably met with celebration by those opposed to the war. Almost six years of the U.S.-Saudi‑U.A.E. war on Yemen have left the country devastated by humanitarian disaster and famine. Anti-war activists have spent these years — first during the Obama-Biden administration, then the Trump-Pence administration, and now the Biden-Harris administration — agitating to end U.S. participation in the onslaught. It has been an organizing effort that often seemed like shouting into the wind, as the bombings of hospitals, factories and weddings piled up. The countless people who have been toiling in obscurity to end this war, and those in Yemen who have joined in this effort while surrounded by hardship and death, certainly deserve praise and gratitude for the fact we’ve gotten this far.

But Biden’s foreign policy speech, delivered just hours after Sullivan’s teaser, unfortunately underscored that we must not celebrate the end of the war until we verify that it has actually, materially ended. That is because Biden’s remarks leave just enough room for the president to gesture toward ending the war without actually halting all U.S. participation in it.

Biden first noted that USAID will reach Yemeni civilians who have suffered ​“unendurable devastation” (the Trump administration suspended aid to much of Yemen in 2020) and declared ​“this war has to end.” He then added, ​“We are ending all American support for offensive operations in the war in Yemen including relevant arms sales.” Biden said he is appointing career-long diplomat Timothy Lenderking as a special envoy to Yemen. But the president continued, ​“At the same time, Saudi Arabia faces missile attacks and UAV strikes and other threats from Iranian supplied forces in multiple countries. We are going to continue to help Saudi Arabia defend its sovereignty and its territorial integrity and its people.”

Unfortunately, qualifiers like ​“offensive” and ​“relevant” do not signal a clear commitment to ending all forms of support for the U.S. war in Yemen, which includes targeting assistance, weapons sales (the U.S. is the largest supplier of arms to Saudi Arabia), logistics, training, and intelligence sharing with the Saudi-led coalition. Labeling Yemen’s Houthis as ​“Iranian supplied forces,” and making a commitment to defending Saudi Arabia’s ​“sovereignty,” echoes President Obama’s initial pretense for entering the war on Yemen in 2015. The White House statement that signaled Obama’s illegal entry declared, ​“In response to the deteriorating security situation, Saudi Arabia, Gulf Cooperation Council (GCC) members, and others will undertake military action to defend Saudi Arabia’s border and to protect Yemen’s legitimate government.” In other words, from the outset, this onslaught was framed by the U.S. as defensive.

Importantly, Sullivan noted that ending the war in Yemen ​“does not extend to actions against AQAP,” or al-Qaeda in the Arabian Peninsula. While sanctioned by the AUMF, it’s important to oppose this parallel U.S.-led war in Yemen that has also led to the killing of civilians.

Now, more than ever, it is vital to hold a firm line about what a real end to U.S. participation in the Yemen war means: an end to all U.S. assistance, including intelligence sharing, logistical help, training, providing spare parts transfers for warplanes, bomb targeting, weapons sales and support for the naval blockade (we still don’t know the full extent of U.S. support for the latter). It also requires that the United States immediately reverse the Trump administration’s designation of the Houthis as a Foreign Terrorist Organization (FTO), a determination that is cutting off critical aid to northern Yemen and significantly escalating the crisis of mass starvation.

Because these things have not yet come to pass, it is critical to keep up the pressure until the war is really ended. As much as we might welcome positive messaging — no doubt a result of the pressure exerted by dogged organizers — we must not rest until we have won actual material relief.

This is not to sow nihilism: It is significant that President Biden, whose own Obama-Biden administration first initiated U.S. involvement in the war, feels that he has to answer to anti-war activists. A global day of action to end the war on January 25 saw people mobilize from streets to online forums demanding an immediate halt to the war, reflecting the growing power of an international movement to end the onslaught.

And the Biden administration has taken some steps. In the 24 hours before leaving office, Trump’s final act of war on Yemeni civilians involved signing a $23 billion arms sale to the U.A.E., in addition to the designation of the Houthis as an FTO. Two days after taking office, Biden’s State Department launched a review of the FTO designation, citing ​“deep concern about the designation that was made is that at least on its surface it seems to achieve nothing particularly practical in advancing the efforts against the Houthis and to bring them back to the negotiating table, while making it even more difficult than it already is to provide humanitarian assistance to people who desperately need it.” And one week after taking office, Biden temporarily froze the sale of F‑35s included in the Trump deal, as well as precision-guided munitions destined for Saudi Arabia.

But these temporary halts and reviews have not yet had any tangible effects, as the FTO has not been reversed and arms sales to Saudi Arabia and U.A.E. have not been cancelled. Indeed, a celebrated Wall Street Journal report from January 27 about the Biden administration ​“pausing” arm sales to Saudi Arabia subtly noted in paragraph three that the pause ​“isn’t unusual for a new administration” and ​“many of the [arms] transactions are likely to ultimately go forward.” Still, these steps could indicate a willingness by the Biden administration to end U.S. involvement in the war on Yemen.

But rhetoric and positive signals are not enough. We need a material end to all U.S. assistance now, before one more Yemeni dies, and we need to verify that this assistance has ended before we declare victory. The Trump administration claimed, at various points, that it was working toward the end of the war via a ​“political solution.” Of course, the Trump administration horrifically escalated the war — rhetoric to the contrary did not shield Yemenis from U.S.-manufactured bombs, or the assault on the port city of Hodeidah.

Rep. Ro Khanna (D‑Calif.), in his January 25 address at the World Says No to War on Yemen global online rally, noted his commitment to ending the war in Yemen by re-introducing the War Powers Resolution that Trump previously vetoed. ​“Senator Sanders and I will be advocating and introducing again a War Powers Resolution to stop any logistical support…any intelligence support, any military support to the Saudis in their campaign in Yemen,” he said. Passing another War Powers resolution with these provisions would provide additional and significant pressure on the Biden administration.

The Obama-Biden administration made numerous announcements in 2012 and 2013 that it would end the U.S. war in Afghanistan by 2014. But we saw that declarations do not, in themselves, end U.S. aggression. This principle especially applies when declarations are loaded with red-flag-raising qualifiers like ​“offensive operations” and ​“relevant weapons systems.” We should know in a matter of weeks what the details of Biden’s plans for Yemen are. The job in the meantime is to maintain pressure, to ensure the Biden administration brings about a real end to the war that the president helped start — and says he wants to bring to a close.

Shireen Al-Adeimi is an assistant professor of education at Michigan State University. Since 2015, she has played an active role in raising awareness about the Saudi-led war on her country of birth, Yemen, and works to encourage political action to end U.S. support.

Sarah Lazare is web editor and reporter for In These Times. She tweets at @sarahlazare.