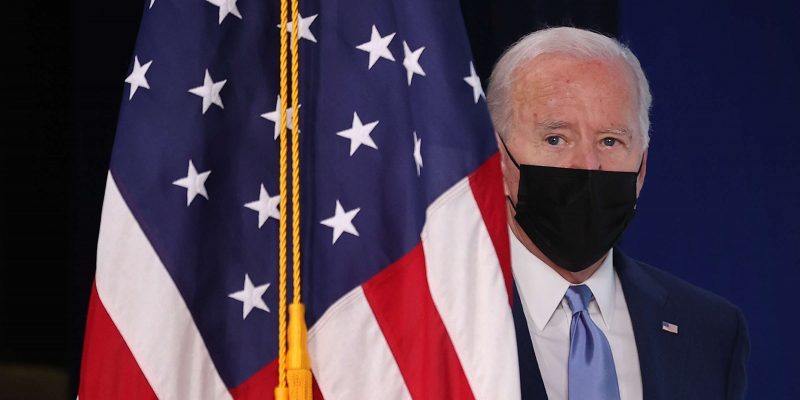 Above Photo: President Joe Biden takes the stage before delivering remarks on the September jobs numbers in the South Court Auditorium in the Eisenhower Executive Office Building on October 8, 2021, in Washington, D.C. Chip Somodevilla / Getty Images.

When Abu Zubaydah was apprehended in Pakistan in 2002, the George W. Bush administration falsely characterized him as chief of operations for al-Qaeda and Osama bin Laden’s number three man. For the next four years, the CIA sent Zubaydah to its “black sites” in Thailand and Poland where he was viciously tortured. In 2006, Zubaydah was taken to Guantánamo, where he remains to this day. He has never been charged with a crime.

The torture of Abu Zubaydah is thoroughly documented in the 2014 report of the Senate Select Committee on Intelligence. In fact, several of the justices at the October 6 Supreme Court oral argument in United States v. Zubaydah referred to his treatment as “torture.”

Zubaydah’s lawyers detailed the torture he suffered in their brief (which referenced the Senate torture report) as follows:

On 83 different occasions in a single month of 2002, he was strapped to an inclined board with his head lower than his feet while CIA contractors poured water up his nose and down his throat, bringing him within sight of death. He was handcuffed and repeatedly slammed into walls, and suspended naked from hooks in the ceiling for hours at a time. He was forced to remain awake for eleven consecutive days, and doused again and again with cold water when he collapsed into sleep. He was forced into a tall, narrow box the size of a coffin, and crammed into another box that would nearly fit under a chair, where he was left for hours. He was subjected to a particularly grotesque humiliation described by the CIA as “rectal rehydration.”

Nevertheless, the Biden administration told the high court that Zubaydah’s well-known torture is a “state secret” because former CIA Director Mike Pompeo said publicizing it would harm national security. Thus, Solicitor General Brian Fletcher argued, the two contractors who orchestrated Zubaydah’s torture in Poland should not be permitted to testify in a Polish court’s criminal investigation into the treatment of Zubaydah.

But as Justice Elena Kagan said, “At a certain point, it becomes a little farcical, this idea of the assertion of a privilege, doesn’t it? I mean, if everybody knows what you’re asserting privilege on, like, what exactly does this privilege.… It’s not a state secrets privilege anymore.”

“Ultimately, the question in this case is whether torture can be kept secret. In a democracy, the answer to that question has to be no,” attorney Joseph Margulies, who represents Zubaydah, told Truthout. “The state secrets doctrine must never be used to prevent an accounting for torture done in our name. If ‘state secrets’ means ‘protect torture,’ before long we won’t have a state to protect.”

The Biden administration seeks to prevent testimony of psychologists James Mitchell and Bruce Jessen, who have already testified in a prior case and in the military commission at Guantánamo. Mitchell and Jessen were the chief architects of the CIA’s “enhanced interrogation techniques,” the U.S. government’s euphemism for torture. They were paid more than $80 million for their vile work.

Continuing Donald Trump’s attempts to thwart the psychologists’ testimony, the Biden administration claims that if Mitchell and Jessen admit Zubaydah was tortured at a CIA black site in Poland, it will create a “breach of trust” with the Polish government.

“The Polish prosecutor already has information [that it happened in Poland] and doesn’t need U.S. discovery on the topic,” David Klein, Zubaydah’s attorney, told the justices. “What he does need to know is what happened inside Abu Zubaydah’s cell between December 2002 and September 2003. So I want to ask simple questions like, how was Abu Zubaydah fed? What was his medical condition? What was his cell like? And, yes, was he tortured?”

Zubaydah’s Testimony Would Be an “Off Ramp” From the Litigation, Gorsuch Says

After the Supreme Court engaged in an extensive back-and-forth exchange about the parameters of the state secrets privilege, Justices Stephen Breyer, Neil Gorsuch and Sonia Sotomayor all insisted that Zubaydah himself, who was an eyewitness to his torture, should be allowed to testify instead of the psychologists at the Polish proceeding. That would circumvent the state secrets issue, they noted. Gorsuch called it an “off ramp” to avoid additional litigation.

Solicitor General Fletcher responded, “Abu Zubaydah cannot testify because he is being held incommunicado. He has been held in Guantánamo incommunicado.”

“Why, Why?” Breyer asked, astounded that Zubaydah is still being held in Guantánamo after 15 years. “In Hamdi [v. Rumsfeld], we said you could hold people in Guantánamo. The words were: Active combat operations against Taliban fighters apparently are going on in Afghanistan. Well, they’re not anymore.”

Brett Kavanaugh asked Fletcher, “Is the United States still engaged in hostilities for purposes of the AUMF [Authorization for Use of Military Force] against Al Qaeda and related terrorist organizations?” Fletcher replied, “That is the government’s position, that notwithstanding the withdrawal of troops from Afghanistan, we continue to be engaged in hostilities with Al Qaeda and, therefore, the detention under law of war remains proper.”

Kavanaugh and Fletcher apparently overlooked the fact that “the C.I.A. later concluded that Abu Zubaydah was not a member of Al Qaeda,” according to the Senate torture report. And the AUMF that Congress gave Bush after 9/11 only authorized the president to use military force against those groups and individuals responsible for the 9/11 attacks.

Joe Biden is not the first president to invoke the state secrets privilege in the “war on terror.” The Bush administration used the privilege to evade accountability for torture, to silence whistleblowers and prevent disclosure of its extraordinary rendition program (where the CIA sent people including Zubaydah to other countries to be tortured). Bush’s assertion of the privilege did not, however, succeed in keeping the publicly acknowledged National Security Agency surveillance program secret. The Obama administration invoked the privilege to block judicial inquiry into extraordinary rendition. It also used the privilege to hide Barack Obama’s “kill list” that authorized the CIA and the Defense Department to kill civilians with no showing of imminent threat. And the Trump administration utilized the privilege in Zubaydah’s case and another torture case, as well as to preclude release of an FBI report about Saudi complicity in the 9/11 attacks.

Will the Supreme Court accept Biden’s assertion of the state secrets privilege to prevent testimony of Mitchell and Jessen in the Polish court? Will the Court urge the executive branch to allow Zubaydah to testify about his torture at the CIA’s black site in Poland? Will the Court suggest that the executive reconsider the indefinite detention of Zubaydah in light of the U.S. withdrawal from Afghanistan? We will know by June 2022.

This case is a pivotal test of the willingness of the Supreme Court to check and balance the executive when it perpetrates torture and other war crimes in its “war on terror.” In 2016, Margulies said that Abu Zubaydah is “the poster child for the torture program, and that’s why they never want him to be heard from again.”