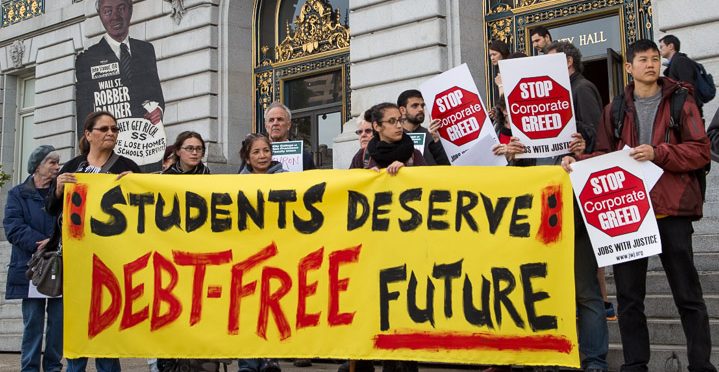 Biden’s chief of staff said that the president asked the Education Department to review his legal authority to cancel debt and that he will determine how he could proceed.

NOTE: The student debt movement has been active in pushing President Biden to erase all student debt and is currently in a week of action. That the Biden administration is reviewing this is positive and means this is the time to push harder for student debt cancellation. It also requires being vigilant to make sure the administration doesn’t mislead people or try to do less than it can. To learn more about how Biden can erase all federal student loan debt and why this is needed, listen to this Clearing the FOG interview with Alan Collinge of Student Loan Justice.  – MF

Klain said in an interview with Politico that Biden will decide how to proceed once he reviews the memo, which could be sent to his desk in the next few weeks.

“He’ll look at that legal authority, he’ll look at the policy issues around that, and then he’ll make a decision,” Klain said. “He hasn’t made a decision on that either way. In fact, he hasn’t yet gotten the memos that he needs to start to focus on that decision.”

Senate Majority Leader Chuck Schumer, D-N.Y., Sen. Elizabeth Warren, D-Mass., and other Democrats on Capitol Hill are pressuring Biden to cancel up to $50,000 in student debt through executive action. Lawmakers have conceded that they lack the Republican support to pass a bill that would do the same.

Biden has backed canceling up to $10,000, but he has said he does not think he has the legal authority to unilaterally wipe out as much as $50,000 without congressional action.

“I understand the impact of debt, and it can be debilitating,” Biden said at a town hall event in February. “I am prepared to write off the $10,000 debt, but not 50 [thousand], because I don’t think I have the authority to do it.”

The memo is being prepared with the Justice Department, with the Education Department taking the lead.

More than 40 million people in the U.S. are estimated to have student loan debt. The Federal Reserve estimates that in the third quarter of 2020, Americans owed more than $1.7 trillion in student loans. Studies show that students of color are more likely to take on student debt and disproportionately struggle to pay it back.

White House press secretary Jen Psaki told reporters in February that while the review of his executive authority continued, Biden would be “eager” to sign a bill that provided $10,000 in debt relief.

Lauren Egan is a reporter for NBC News based in Washington.