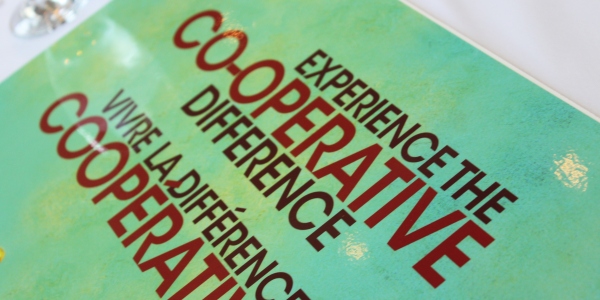 Biggest Secret In The World Economy

The year 2012 was designated the International Year of Cooperatives by the United Nations in recognition of the fact that more than 800 million people around the world belong to one of these economic networks. Coops flourish in all sectors of the economy proving that economic efficiency and equitability can co-exist. They represent a commons-based alternative to both the private market and state controlled enterprises.

Around the world, coops provide 100 million jobs, 20 percent more than multinational companies. But what’s most remarkable is how little attention they receive in business coverage or anywhere else. That’s why I am glad that David Bollier, our former On the Commons colleague, highlights the work of Gar Alperovitz, an American champion for democratizing capital, on his blog Bollier.org

“We may be moving toward a hybrid system, something different from both traditional capitalism and socialism, without anyone even noticing.”— Gar Alperovitz

While a great many commons seek to develop alternatives to conventional businesses – and even to bypass markets altogether – the struggle to democratize capital should not be lost in the shuffle. Popular ownership of capital assets and business enterprises is still a great strategy for building the commons and advancing the public good. Fortunately, there’s a growing enthusiasm for this approach.

One of the most eloquent advocates for socially friendly forms of capital ownership – the French call it the “social economy” – is Gar Alperovitz, a historian and political economist at the University of Maryland and a founder of the Democracy Collaborative. Alperovitz’s 2005 book, America Beyond Capitalism, was recently re-issued, presumably because it speaks to the political moment. How can we make economic progress when banks and large corporations are simply looking out for themselves? How can we reduce wealth inequality when government is captured by corporations and the affluent?

Alperovitz showcases the history and great potential of co-ops, worker-owned companies, and urban land trusts. He notes the constructive role that is played by municipal utilities, state-owned banks and state-chartered trusts such as the Alaska Permanent Fund. There are also dozens of cases in which states use their investment dollars to help communities, use government procurement to help worker-owned businesses, and provide venture capital to startups.
These alternatives to traditional capitalist models are actually flourishing, Alperovitz notes: “We may be moving toward a hybrid system, something different from both traditional capitalism and socialism, without anyone even noticing. Some 130 million Americans, for example, now participate in the ownership of co-op businesses and credit unions. More than 13 million Americans have become worker-owners of more than 11,000 employee-owned companies, six million more than belong to private-sector unions.”

The great virtue of Alperovtiz’s hybrid “wealth building” models is that they “challenge dominant ideologies which hold that private corporate enterprise offers the only possible way forward; and they help open new ways of conceptualizing practical approaches to meaningful larger scale democratization.”

As a theoretical approach, Alperovtiz focuses on the democratization of wealth; the mobilization of communities, especially at the local level; the decentralization of power; and democratic planning in support of community and long-term ecological and economic goals.

Yet theory is not used here as an ideology or as a rhetorical posture. It is a way of describing projects that work. That is what makes so many of the examples in this book so appealing: they work. Chapter 7 surveys worker-owned firms as viable alternatives to footloose corporations. Chapter 8 describes “enterprising cities” that use their land, infrastructure and other resources to generate money for public purposes. Other chapters deal with local democratization and larger-scale “public trusts.”

Alperovitz has focused a lot of his energies on Cleveland, where there are a variety of worker-owned businesses. Perhaps the most notable is the Evergreen Coop, which consists of a “green” institutional laundry, a solar-panel installation coop and hydroponic agriculture businesses. The details of these and other stories add up to a refreshing approach to economic and community development.

“In Indiana, the Republican state treasurer, Richard Mourdock, is using state deposits to lower interest costs to employee-owned companies, a precedent others states could easily follow. Senator Sherrod Brown, Democrat of Ohio, is developing legislation to support worker-owned strategies like that of Cleveland in other cities. And several policy analysts have proposed expanding existing government “set aside” procurement programs for small businesses to include co-ops and other democratized enterprises.

“If such cooperative efforts continue to increase in number, scale and sophistication, they may suggest the outlines, however tentative, of something very different from both traditional, corporate-dominated capitalism and traditional socialism.”

In a recent New York Times oped piece, Alperovitz noted that “this year some 14 states began to consider legislation to create public banks similar to the longstanding Bank of North Dakota; 15 more began to consider some form of single-payer or public-option health care plan.”

So long as the national debate is locked into the old categories of “capitalism” vs. “socialism” — as if they were the only choices, and as if each were a monolithic creature — we will be stuck in a ditch, unable to bring about any systemic change. But if we can begin to see how a diverse array of community-based business models are succeeding, we may just glimpse a productive path forward.

David Bollier, the founding editor of On The Commons, thinks and writes about the commons at Bollier.org , where this post originally appeared under a Creative Commons Attribution license. Bollier’s commons activism is focused on The Commons Law Project and The Commons Strategy Group