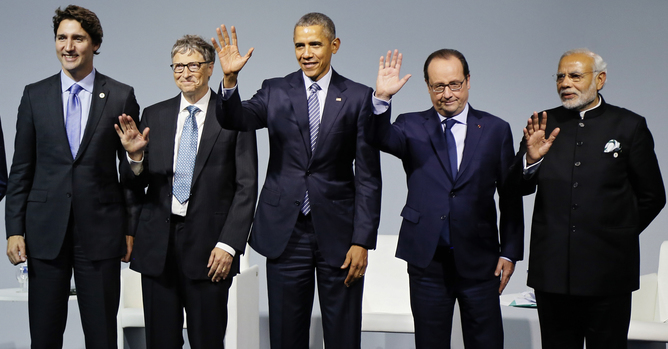 Bill Gates’ announcement of the multi-billion dollar Breakthrough Energy Coalition gave a great boost to the Paris talks, yet he still doesn’t see investing in fossil fuel companies as a problem.

Paris, France – Bill Gates was a rare civilian among presidents and prime ministers at the opening session of the Paris climate talks on Monday. The reason that Mr. Gates was there, sharing a stage with the likes of President Obama and Prime Minister Modi of India, was that he was announcing his latest piece of entrepreneurial philanthropy: the Breakthrough Energy Coalition.

Including 28 of the world’s truly super rich, the raison d’ etre of the Gates-headed coalition is to provide financial support to companies that bring innovative clean energy ideas to the marketplace. An initial two billion has been pledged, and that figure is expected to rise dramatically. The coalition was announced in tandem with the Mission Initiative, a commitment that has been made by 20 nation-states, including China, the US and India, to double their investments in clean energy research and development. On the kick-off of perhaps the most important multilateral talks in history, Gates and Co’s announcement can only give a major boost to the negotiations. All the more so for the role it has played in eking out early financial commitments from China, the US and India, which together comprise 40% of global carbon emissions, and without whose cooperation, the Paris talks are doomed to failure.

While Gates’ announcement is certainly commendable, it comes at a time when his climate legacy has been under unprecedented scrutiny. 235,000 people signed The Guardian’s petition calling on the Gates Foundation to divest its financial holdings from fossil fuels. Shortly thereafter, other local activists and I took the call to Gates’ hometown of Seattle. Over a period of 3 months the group Gates Divest organized daily protests outside of the Foundation and galvanized 68 local faith leaders, 74 local non-profit organizations and over 1,000 health professionals to speak out in favor of the Foundation’s divestment. Gates hand was even bitten by those it had fed, when 106 Gates-funded scholars from the University of Cambridge called them out on their fossil fuel investments.

Yet even with Gates facing such unprecedented attention and putting an ever-increasing portion of his philanthropic energies into confronting climate change, he has remained remarkably quiet on the $475 million that the Gates Foundation still has invested in fossil fuels.

Which is a shame: Important as it is, cleantech investment is only half of the solution.

The other half is in limiting the power of the fossil fuel industry. At a time when fossil fuel companies already have up to five times as much carbon in their coal, oil and gas reserves as we can burn and yet these companies are continuing to spend 1% of global GDP on looking for more fossil fuels, limiting their power has to be a vital part of any genuine solution. That divestment can help play a vital role in doing so is something that has been recognized by everyone from the United Nations to HSBC Bank, Nobel Prize-winning economists to Oxford University researchers.

Yet, despite his willingness to put billions of his own money on the line to battle climate change, it seems that Bill and Melinda still aren’t quite willing to consider divestment as a tool. Yes, the Gates Foundation may have recently reduced their fossil fuel investments, but the fact that they done so quietly means that while they have moved their investment capital out of companies like Exxon Mobil, their even more powerful moral capital remains on the table. This is important because it is in the taking of a moral stance that divestment finds its power, creating a stigmatization process that makes it far easier to curtail the power of the fossil fuel industry. This was unequivocally recognized in the most comprehensive study done on divestment to date: “Almost every divestment campaign [has been] successful in lobbying for restrictive legislation curtailing the power of stigmatized companies.”

Gates’ refusal to publicly support divestment is even more confusing after yesterday, as his announcement tells us that he clearly believes that where we put our money matters. They key to avoiding catastrophic climate change, Gates says time and again, is in funding the right ideas, the right technologies. It is almost as if Gates is reminding us of the old saying that every dollar we spend is essentially a vote for the sort of world we want to live in. Which, at the end of the day, is kind of an odd thing for a man with some $475 million invested in fossil fuel companies to be reminding us.

Alec Connon is an author. His first novel, The Activist, will be released in March 2016 by Ringwood Publishing. He is also a leader of the Seattle-based Gates Divest.