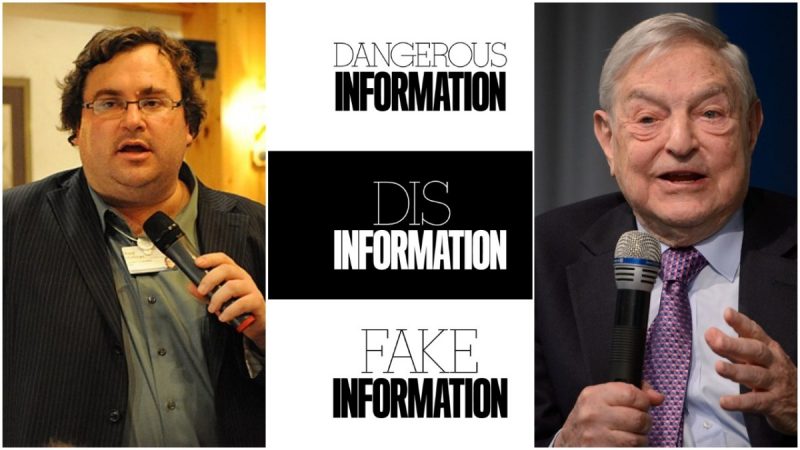 Billionaire CIA-linked “overt operative” George Soros teams up on a shady media venture with tech billionaire Reid Hoffman, who financed a Facebook disinfo operation that framed Russia for meddling in US elections.

On Tuesday, billionaires Reid Hoffman and George Soros launched Good Information Inc., a “public benefit corporation” to serve as a conduit of funds to newsrooms that “cut through the echo chambers with fact-based information.” On its website, Good Information further describes itself as a “civic incubator” aimed at fostering and financially backing projects that “counter disinformation where it spreads by increasing the flow of good information online.”

But more than merely providing an alternative to bad information through their own reporting, the company suggests that censorship is also on the menu: “We believe there is an urgent need for regulation of social media platforms,” their website [states](https://goodinfo.us/info‘).

And what exactly is “good information?” The company provides another clue; that the “good information” resides exclusively on the pages established media outlets with billion-dollar budgets, lamenting on its website that “185 million Americans don’t trust traditional media.”

Billionaire “philanthropist” George Soros has weaponized his vast wealth in support of US foreign policy for several decades. Following the collapse of the Soviet Union and later the unraveling of the socialist bloc in Eastern Europe, The Washington Post celebrated Soros as a member of a “new network of overt operators” supporting “pro-democracy activists” and media operations in place of – and alongside – the CIA.

Continuing his anti-communist crusade into the 21st Century, Soros has sponsored color revolutions and information warfare campaigns against designated US enemies from Hong Kong to Syria to Russia.

This summer, the billionaire regime change enthusiast wrote that he considers China’s president Xi Xinping “the most dangerous enemy of open societies in the world.” Previously, Soros had declared Russian President Vladimir Putin “a bigger threat to Europe’s existence than ISIS.”

Having sponsored the activities of many thousands of pro-US activists abroad, Soros is teaming up on Good Information Inc. with Reid Hoffman – a fellow billionaire with his own track record of political meddling – to train the sights of information operations back on the United States.

Hoffman was the money man behind Project Birmingham, a covert disinformation operation devised by a tech company called New Knowledge which aimed to depress voter turnout among Republicans during Alabama’s 2017 special senate election. The operation created a Facebook page for a previously unknown Republican candidate  and promoted him to the media to divide the GOP vote.

Further, it relied on underhanded tactics including, in the company’s words, “orchestrat[ing] an elaborate ‘false flag’ operation that planted the idea that the [Roy] Moore campaign was amplified on social media by a Russian botnet.”

As the New York Times reported, “the funding” for this “experiment in the Alabama Senate race” came “from Reid Hoffman.”

Thanks to the chaos spawned by the suspiciously glitchy app, establishment favorite Pete Buttigieg eeked out a victory over Sanders six days later. Iowa Democratic Party chair Troy Price resigned after overseeing the payment of $63,000 to Shadow Inc, the maker of the Shadow App, just months prior.

I’m also confident that this event and experience will only make myself, Gerard, the @anotheracronym and @ShadowIncHQ teams better for it. More diligent, more focused, more effective + more committed than ever to this necessary work.

It turned out that a young Democratic Party operative named Tara McGowan had not only founded the Hoffman-backed Acronym PAC; she was married to a top Buttigieg advisor.

And now, McGowan is set to “lead” the Soros-Hoffman Good Information venture.

The Good Information website was launched by Kyle Tharp, another Acronym veteran who boasts that he “led all communications for ACRONYM and its affiliated political action committee PACRONYM during the 2020 presidential election” on his LinkedIn page.

Tharp also worked as an editor of FWIW Media, which is owned by Acronym, journalist Lee Fang has reported.

While the Good Information website was created in late February, McGowan is capitalizing on the buzz surrounded The Facebook Files leaked by Frances Haugen, a former Facebook employee exposed by this reporter as a pseudo-whistleblower cultivated by a former CIA agent and attorney accused of informing on his client to the FBI.

In announcing the launch of Good Information, McGowan tweeted: “The broken, divisive information ecosystem in which we find ourselves today is an all-hands-on-deck challenge for American democracy. Excited to finally share what we’ve been building over the past few months to address it.”

“One thing that the #FacebookPapers make abundantly clear is that bad information flowing online is one of the gravest threats that we face as a society,” she added.

Despite Reid Hoffman’s sponsorship of McGowan across multiple projects, Hoffman himself has invested in Facebook.

Good Information will “acquire Courier Newsroom from ACRONYM for an undisclosed sum,” Axios reported, describing it as a “local news group with a progressive perspective.”

Courier Newsroom is uniquely equipped to fulfill Good Information’s mission statement of “cut[ting] through the echo chambers with fact-based information.” At the time of this article’s publication, the top story from the network featured on their website instructed readers on “the right way to eat candy corn.”

The seemingly banal story was in fact part of a cynical strategy McGowan has honed on Facebook and other social media sites: spin out media outlets in swing states with a seemingly local flavor, draw in unsuspecting audiences with clickbait articles, then mobilize readers ahead of elections with aggressive political content.

Good Information will be led by an advisory board that is heavily made up of former Obama alumnus and Democratic Party apparatchiks united in their hunger for control over the American information ecosystem and zeal for censoring ideological opponents.

Board members include Dan Pfeiffer, a former Senior Advisor to President Obama who co-hosts the popular neoliberal Pod Save America podcast; Jason Goldman, the Obama White House’s Chief Digital Officer; Eli Pariser, former Executive Director of MoveOn and co-founder of the online activist group Avaaz, which promoted regime change wars on Libya and Syria; Nandini Jammi, a former co-founder of Sleeping Giants, a pro-censorship  Democrat lobby that pressures advertisers to cut ties from right-wing news outlets, and the co-founder of Check My Ads, a non-profit that runs background checks on companies to help them avoid advertising on platforms that promote “disinformation” and hate speech; Stephanie Valencia, who “served President Barack Obama in senior roles through his presidential campaign and both terms in office,” Michael Tubbs, a former mayor and current advisor to California Governor Gavin Newsom; Tiffany Muller, president of End Citizens United and Let America Vote; Nicole Gill, co-founder and executive director of Accountable Tech, an organization that says it is “fighting back” against “social media giants…eroding our consensus reality and pushing democracy to the brink;” and Jennifer Gunter, a gynecologist and author of “The Vagina Bible” and “Menopause Manifesto.”

Like McGowan, many of these board members have seized on the narrative spun out by Facebook pseudo-whistleblower Frances Haugen to advance their agenda.

Despite the obvious political leanings of the Good Information advisory board, its funders, and its leader, Tara McGowan, McGowan has insisted the initiative “could make investments in entities across the political spectrum.” She pointed to The Bulwark as an example of the type of right-leaning outlet they could fund.

Launched by Project for the New American Century co-founder and unrepentant Iraq war cheerleader Bill Kristol with financial backing from billionaire information mogul Pierre Omidyar, The Bulwark is part of Kristol’s rebranding from the smarmy neocon warmonger who discovered Sarah Palin to the anti-Trump Resistance figure celebrated on MSNBC as “Woke Bill Kristol.”

Good Information is much more than another partisan op. It a domestic echo of the aggressive information warfare operations that billionaire activists like Soros and Omidyar have sponsored abroad, usually alongside US intelligence cut-outs, in the service of imperial goals. And this time, the target is the American public.