“Rise Up to Shut Down AFRICOM”

Fifty-seven years since the founding of African Liberation Day (ALD), the pressing need for African unity is more apparent than ever.

The Black Alliance for Peace (BAP) recognizes the crucial role of ALD in revitalizing internationalism and anti-imperialism as the bedrock of a reconstituted Black liberation project committed to an authentic process of decolonization. Globally, the African working class is locked in mortal combat against the forces of neoliberal capitalism, which is concentrated in the geostrategic interests of the U.S. ruling classes.

To preserve these interests, the U.S. is involved in an aggressive military re-conquest of Africa through its United States Africa Command (AFRICOM) formed in 2008 with the goal of imposing an enhanced U.S. influence throughout the African continent. AFRICOM has made African nations vassal states following the dictates of U.S. foreign policies, which are antithetical to the needs of African people.

Today, there are 46 various forms of U.S. bases as well as military-to-military relations between 53 out of the 54 African countries and the United States. U.S. Special Forces troops now operate in more than a dozen African nations. Using the political and moral cover of a phony counterterrorism role, U.S. politicians of all racial and ethnic backgrounds validate this U.S. presence in Africa.

BAP calls for an end to AFRICOM and to all foreign interference in the affairs of African countries. War, drone strikes and sanctions have devastated nations and millions of people. A mass movement must be forged to expose AFRICOM and its purpose and make it inseparable from the movement to resist the militarized police repression in African (Black) communities in the United States.

The campaign and its organizational arm, the U.S. Out of Africa Network (USOAN), is calling on all Africans everywhere and all anti-imperialists to join us on another historic day of resistance June 16, Soweto Day, to “Rise Up to Shut Down AFRICOM” with actions in the spirit of the African youth who rose up against the white supremacist South African government in 1976.

Africa and the world-wide African nation must be and will be free. But imperialism will not be defeated by shouting at it, no matter how elegant the denunciations. Imperialism will only be defeated through struggle. The U.S. Out of Africa: Shut Down AFRICOM campaign is one point of concentration that targets the military component of U.S. and Western imperialism.

Let us take the opportunity of ALD 2020 to re-dedicate ourselves to building structures of cooperation and coordination between Africans in the diaspora and on the continent to engage and defeat the enemies of Africa, both foreign and domestic. 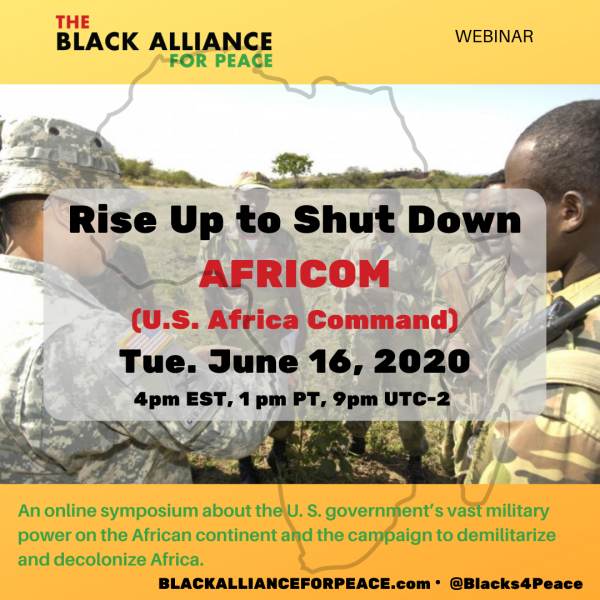 Africa Must Be Free!
Rise Up to Shut Down AFRICOM!
Defeat the Pan-European White Supremacist, Colonial/Capitalist Patriarchy!
No Compromise, No Retreat!