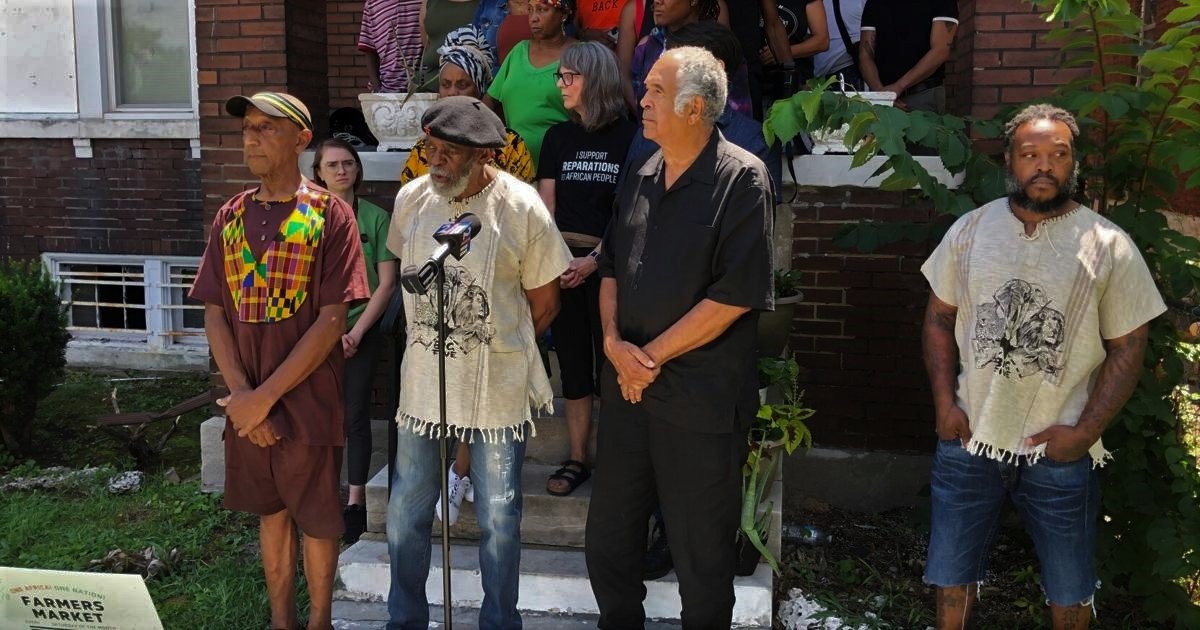 Above Photo: Omali Yeshitela stands in front of his St. Louis, MO home with his supporters. St. Louis Post-Dispatch.

On Friday, July 29, 2022, the FBI executed multiple raids against APSP’s Uhuru House in St. Petersburg, Florida and their Uhuru Solidarity Center in St. Louis, Missouri and the private residence of APSP Chairman Omali Yeshitela also in St. Louis. The FBI employed flashbang grenades and handcuffed Yeshitela and his wife while their house was raided. The FBI claims that the raids are connected to the federal indictment of a Russian national, Aleksandr Ionov, alleging that he has been working to spread “Russian propaganda” in the United States.

BAP believes that these raids continue the history of state repression directed against Black people in the U.S. This repression now occurs under the guise of opposing “adversary” nations but regardless of how these actions are characterized, Black people still bear the brunt of surveillance and police violence. The APSP has the right to freely associate with people around the world, to hold any political beliefs it may choose, and to express them without fear of intimidation, persecution, or prosecution.

We believe this repression to be a hysterical response to the United States’ loss of legitimacy in the context of the deepening crisis of capitalism and U.S. global hegemony. The unleashing of policing and counterintelligence forces domestically and increased militarism and warmongering abroad in the name of national security are the only avenues left to the U.S. ruling class that is engulfed in an irreversible economic crisis. They represent the hallmarks of a naked fascism that the U.S. ruling class appears to be increasingly committed to in order to maintain the rule of capital.

BAP reminds the public that the war against working class people generally, and Black, Brown, and Indigenous workers particularly, is ongoing. The masses must acknowledge and resist this reality. While it is APSP today, it will ultimately be the rest of us tomorrow. Resistance is our only option.

Given our steadfast commitment to rebuilding the broader anti-war, anti-imperialist peace movement, BAP is not intimidated and will not retreat. We are guided by the position articulated by the Black is Back Coalition, of which BAP is a proud member, that “Now is the time to throw off all hesitation, open up new forms of struggle and to launch every protest, demonstration, and anti-imperialist action – from the ballot box to the barricades – as an act to deepen the crisis of imperialism.”

The treatment of the APSP is reminiscent of McCarthyist witch hunts that targeted and criminalized workers, immigrants, and colonized people who organized domestically and internationally against capitalist imperialism. Likewise, the FBI’s actions represent COINTELPRO-like tactics employed to crush organizations and individuals fighting to protect and expand the rights of oppressed people in general, and Africans in particular.

These tactics came back forcefully in response to the 2014 uprisings in Ferguson, Missouri. FBI agents tracked the movements and monitored the individuals tied to the protests. In 2016, when the murder of Freddie Gray ignited protests in Baltimore, the FBI admitted to providing an aircraft for surveillance in the weeks following the unrest. In 2017, the FBI created the designation “Black Identity Extremist” to monitor Black movement organizers. The term was updated to “Racially Motivated Violent Extremism” in 2018. FBI surveillance was rampant going into the summer 2020 rebellions, with FBI agents attempting to infiltrate protests in Portland.

The Black population in the United States has historically stood at the forefront of resistance and condemnations of war and state repression. In this spirit, the Black Alliance for Peace reiterates the critical, moral stance against such government aggression and stands in resolute solidarity with the APSP.

By comprehensively linking the issue of state violence and militarism, BAP will continue to concentrate its efforts on not only opposing the U.S. war agenda globally but the war and repression being waged on Black and Brown communities within U.S. borders.

In this charge, The Black Alliance for Peace says there will be “No Compromise and No Retreat!”