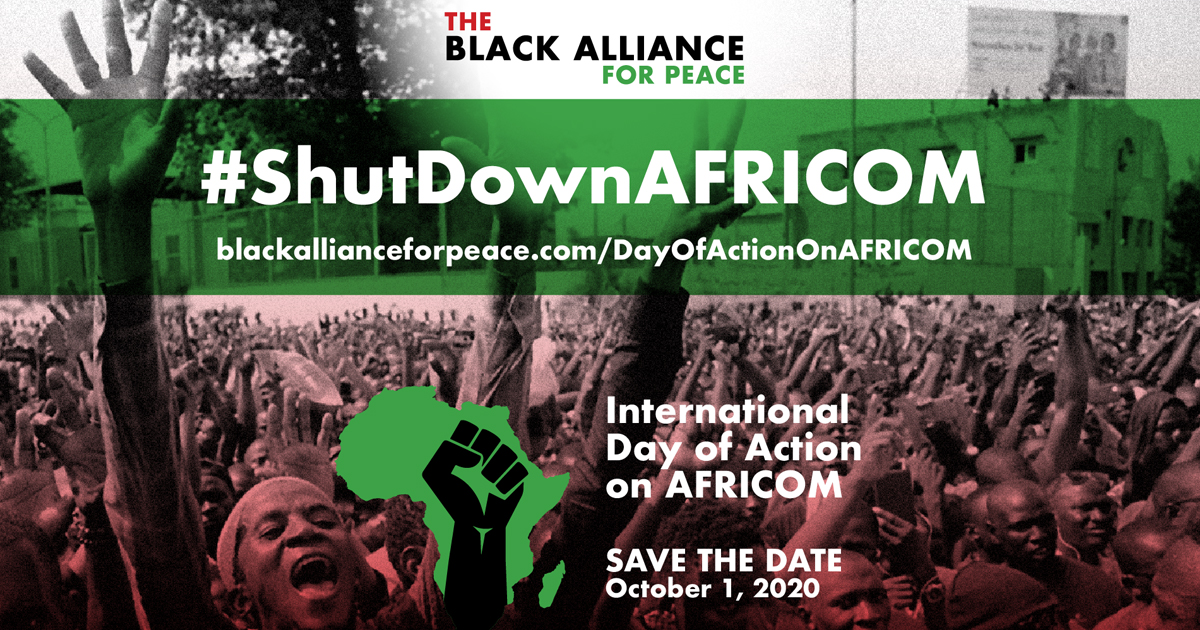 Above photo: Black Alliance for Peace.

Against the U.S. Africa Command (AFRICOM) and Imperialism on the African Continent.

The Black Alliance for Peace’s Africa Team and the U.S. Out of Africa Network are organizing an international month of action to raise the public’s awareness as a contribution to the effort to build a popular movement for demilitarization and anti-imperialism on the African continent. This month’s events will focus on raising the public’s awareness about the use of western military power to impose western control of African land, resources, and labor on behalf of the world’s corporations.

AFRICOM continues to militarily occupy Africa, with thousands of U.S. troops now stationed in some 30 African countries with dozens of U.S. bases across the continent, while it carries out bombings in places like Somalia. U.S. Special Forces roam the Sahel, the Democratic Republic of Congo, Uganda, South Sudan, and the Central African Republic. The command’s operations in Africa over the last decade, including hundreds of drone strikes, billions of dollars in “aid” and “development” projects, and countless massive military exercises including African Lion Exercise, Cutlass Express Exercise, Phoenix Express, Obangame Express, Justified Accord, and Flintlock, which have included participation from Europe, and from almost every African country.

The ramping up of US militarism on the African continent – and the ensuing destabilization of communities and countries, correlate with a 500% spike in incidents of violence attributed to Islamist terrorist organizations. Part of AFRICOM’s stated mission is to “promote regional security, stability, and prosperity.” But its very nature precludes the development of any of these conditions and really brings about destabilization and the furthering of U.S. interests on the continent.

A mass movement must be forged to expose AFRICOM and its real purpose and make it inseparable with the concerns we have over the militarization of police in our communities in the United States. The recently passed National Defense Authorization Act (NDAA)included billions for AFRICOM and the continuation of the Department of Defense 1033program that transfers millions of dollars worth of military equipment to police forces across the country. Resources that are being squandered to support imperialist adventures must be seized by the people and used to address the human rights needs of African/Black people and other oppressed and exploited peoples for housing, healthcare, education, food and clean water, instead of on war on behalf of the corporations and the rich.

Join us for the launch of the international month of action by attending a webinar on October 1st, titled “AFRICOM at 13: Building the Popular Movement for Demilitarization and Anti-Imperialism in Africa.” Organizers and activists from the African continent and the diaspora will discuss AFRICOM and what we can do to expel imperialist forces from the continent. Following the webinar, events will take place throughout October organized by various organizations on the African continent, in the U.S., and around the world to demand an end to the militarization of Africa.

We ask the public to join us in taking action to put an end to the U.S. and western invasion and occupation of the African continent by organizing an event and participating in the month of action on AFRICOM.