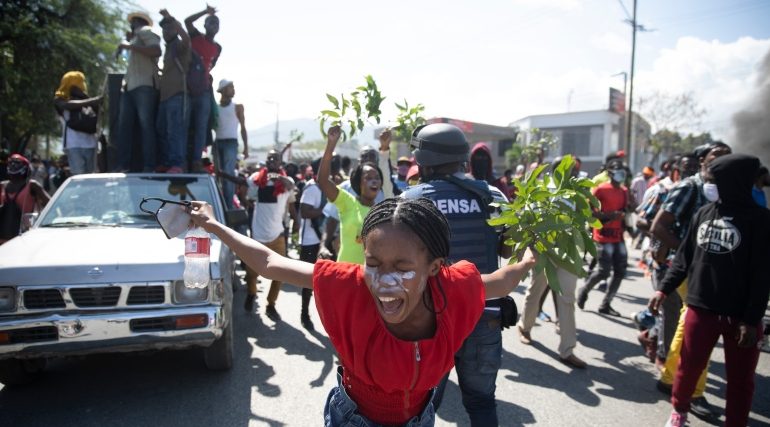 As the world’s eyes are on Ukraine on this International Women’s Day, March 8, 2022, we are reminded of the disproportionate impact that war and militarism have on women. This is a reality that the women of the global South are acutely aware of because of the steady assaults on the humanity of peoples in the South executed by the U.S./EU/NATO Axis of Domination. The militarized terror of the Axis of Domination in the service of their economic elites have been even more intensely felt by the women of Africa and the African Diaspora.

The socialist groundings of the day were expressed in its early unfolding. Indeed, the earliest militants for International Working Women’s Day, lifted up the violence of capitalism as labor exploitation. On March 8, 1908 in New York, 15,000, largely immigrant women marched for labor, voting rights and challenged class exploitation. Thus the seeds were planted for International Women’s Day as imperialism, colonialism, and white world supremacy were in full effect.

Black women’s labor complicated this fight given racialized apartheid into domestic work in the U.S., colonized globally. In the U.S. there were more than a million African American domestic workers before the start of the second European world war. Black anti-imperialist revolutionary, Claudia Jones captures this dialectic of gender, race and class exploitation in her powerful article, “An End to the Neglect of the Problem of the Negro Woman.” She gave voice to the women of the Black/African world locked in and struggling against the Pan-European white supremacist, patriarchal, colonial, imperialist project. These are the women in the crossfire of extractivist capitalism, war and militarism across the African world today, struggling to dismantle these systems. We lift them up today with a focus on the Democratic Republic of the Congo, noting other parts of the African world.

As the world is captivated by the war in Europe, BAP cannot help but reflect on the ongoing conflict in the Democratic Republic of the Congo and the little purchase it has had on the world’s conscience (while commentators point to the war in Ukraine being the most devastating war in Europe since the second imperialist war ended in 1945, the general public knows almost nothing about the most lethal, ongoing conflict in the word taking place in the Democratic Republic of the Congo). The United Nations says it is the deadliest conflict in the world since World War II and the greatest humanitarian crisis at the dawn of the 21st century. An estimated 6 million Congolese have perished in the Congo conflict since 1996, half of the victims five years old or younger. It is a conflict triggered by two invasions (1996 & 1998) by Rwanda, led by Paul Kagame and Uganda, led by Yoweri Museveni, both of whom are backed by the U.S. and UK. When international bodies attempt to hold them to account for their crimes in the Congo, the U.S. or the UK run diplomatic interference or provide political cover, especially for Rwanda’s Paul Kagame. The Biden administration has continued this policy which dates from the Clinton administration – a policy of protecting the perpetrators of war crimes and crimes against humanity in Central Africa.

On this International Women’s Day, March 8, 2022, this ongoing conflict is particularly noteworthy because of a series of wars where the atrocities against women are a key strategy of the perpetrators. Hundreds of thousands of women have been raped, disfigured and mutilated as a weapon of war in order to displace entire villages from resource rich lands. Yet, the U.S. continues to cover for the architects of the crimes in the Congo, especially Paul Kagame, whose army, the UN said in a 2010 report, that if brought in front of a competent court could be charged for committing genocide in the Congo.

Beyond Congo and the African continent, African and other colonized women continually face the brutalities of capitalism and imperialism. In Haiti, the occupation by the United Nations “peacekeeping” troops resulted in massive sexual and physical violence against women and young girls. So has the current Core Group control of the country, which has intensified gang violence. And, currently, the mostly women Haitian garment industry workers, are striking for a living wage and against workplace harassment. We must also point to the continuing assaults on Haiti, assaults on Black women leaders in Colombia, the deaths at the hands of the domestic army in the U.S. referred to as the police, Garifuna women in Honduras murdered by the U.S. coup backed government, the bombardment of women and children in the Gaza strip, death and displacement in Syria and Iraq, and the humanitarian catastrophe in Yemen. Indeed, African and other colonized women know the horrors of war, militarism and all forms of hybrid wars carried out by Western powers, intimately.

No Compromise, No Retreat!