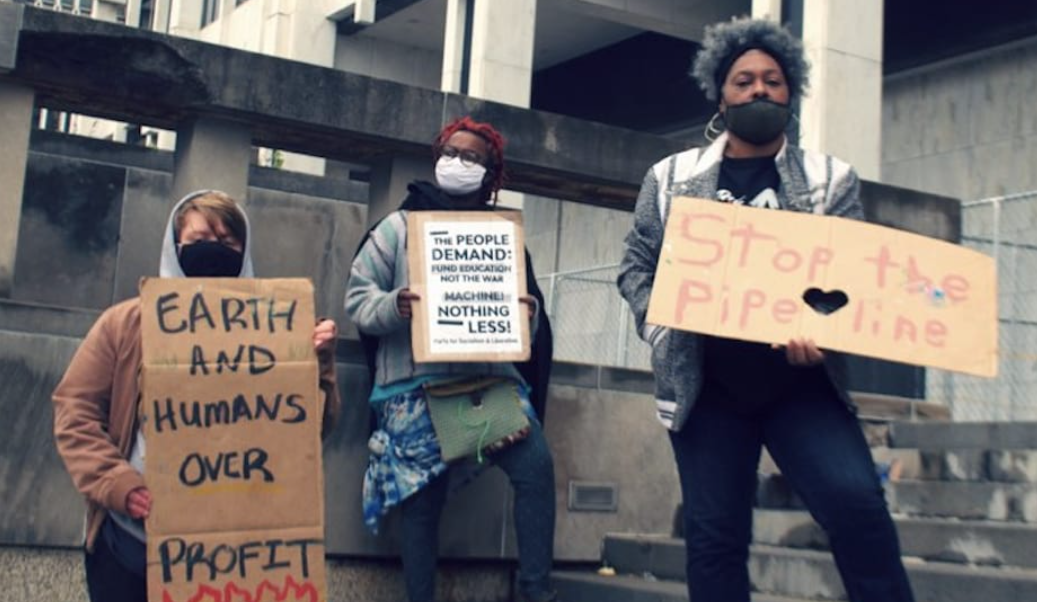 Black communities in Memphis, TN are leading a growing opposition campaign to the Byhalia Connection Pipeline, a proposed crude oil pipeline funded by the fossil fuel corporations Valero and Plains All American. Byhalia has yet to receive a crucial federal permit for the project, lacks local government approvals, and has not acquired all necessary easements for the pipeline route. Advocates argue that there is ample local authority to block the pipeline project.

In an interview, Wyatt Price, a supervising land agent for Plains All American, said: “We took, basically, a point of least resistance” in reference to siting the project through Southwest Memphis, highlighting the concerns of locals who believe that they were targeted because of the racial and economic composition of the area. The Southwest Memphis communities of  Boxtown, Westwood, West Junction and neighboring communities are already burdened by decades of environmental injustice in the siting of polluting facilities, including the Valero refinery. A broad coalition of community members, churches, environmental groups, and racial justice organizations are opposing the project, citing environmental and racial justice violations with the proposal.

Justin J. Pearson, an organizer with the grassroots group Memphis Community Against the Pipeline (MCAP), said:

“This crude oil pipeline is a textbook case of environmental racism and injustice. Our resilient, poor, Black neighborhood is being forced to carry this billion-dollar corporations oil barrels on their backs. Our water, our land, and our lives are being put at risk for their profit.”

The coalition, which includes organizations such as MCAP, Southern Environmental Law Center, Protect Our Aquifer, individual landowners who are resisting eminent domain proceedings initiated by Byhalia, and others, is demanding that the Memphis City Council and county commissioners publicly oppose the pipeline.

Last Monday, Public Works, Solid Waste, and General Services, a Memphis City Council committee, delayed consideration of a resolution that called on the council and Memphis Light Gas and Water Division to oppose the pipeline. Council member Edmund Ford Sr., a co-sponsor of the resolution, expressed concerns about the pipeline’s impact on Memphis water. The Memphis City Council will consider the resolution opposing the crude oil pipeline on Feb. 16, 2021.

“I don’t want to be another Flint, Michigan,” said Ford Sr. during Monday’s council meeting.

On Feb. 4, members of MCAP learned that Ford Sr.’s son, Edmund Ford Jr., a Shelby County Commissioner is working to lift a moratorium on the county to sell land to private developers for one year. The moratorium was agreed upon in October 2020 to prevent corporate land grabs from occurring while the county commissioners created a Tax Increment Financing (TIF) review board. A little more than a week ago, he expressed “NONE of the “red tape” for this project will come to the City Council or County Commission for a vote.” Now, residents have learned that he is leading an effort to sell Memphians’ land to the crude oil pipeline company. Ford Jr. has indicated he supports the proposed pipeline and is introducing a measure before the county commission today, Monday, Feb. 8 to sell that land to Byhalia Connection, LLC.

MCAP is organizing a protest today at 11 am CST at the Memphis Home for Civil Rights to the Shelby County Commissioner’s Office to encourage Commissioners to deny Ford Jr.’s resolution. More info here: https://www.facebook.com/groups/384731222812428/permalink/421682309117319/

“I think he’s throwing us up under the bus. Why wouldn’t he consider the fact that out of all places they could have routed the pipeline they would choose the route to destroy the aquifer. Why would you destroy our good water source?”

The Byhalia Connection Pipeline plan proposes the construction of a high-pressure crude oil pipeline above a pristine water aquifer that serves as the sole drinking water source for Memphis, a major city in an active earthquake zone. The pipeline would run 45 miles, from Memphis to Marshall County, Mississippi. The route of the pipeline cuts through the Davis Wellfield, which is operated by Memphis Light, Gas & Water and is in an area known to be vulnerable to groundwater contamination. The Davis Wellfield provides drinking water for several predominantly Black neighborhoods in southwest Memphis.

Last fall, Southwest Memphis community members came together to form MCAP to condemn the pipeline and put pressure on local officials to support their fight to put an end to the proposed pipeline. MCAP has garnered support from landowners, community associations in Westwood, Whitehaven, Boxtown, West Junction and support from their U.S. Congressman, Steve Cohen.

Memphis Community Against the Pipeline (MCAP) is a Black-led grassroots environmental group organizing the community to stop Valero Energy Corporation, Plains All American, and Byhalia Corporation’s crude oil pipeline that continues a legacy of environmental racism toward the local Southwest community.