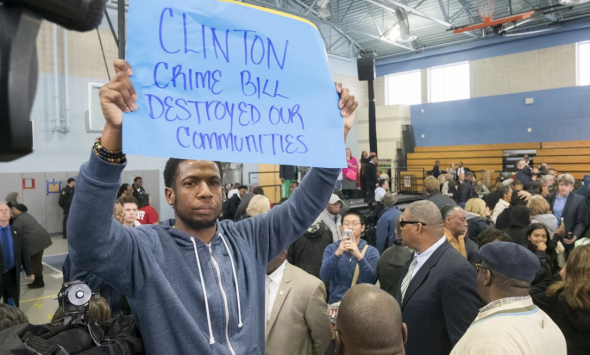 Above Photo: Though murder rates were higher in the 1960s, no one would argue that those organizers should have put the march on Selma on the back burner to focus on black-on-black violence back then. Photograph: Ed Hille/AP

The idea that it is black folks and our supposedly immoral and savage culture that creates our disproportionate rates of poverty and imprisonment is everywhere: cop shows, news media, movies set in black neighborhoods and high-school social studies classes have all perpetuated this misconception. And some are now using this old, false idea to disparage Black Lives Matter, saying that the real problem facing black communities isn’t police violence, racist oppression or economic exploitation but “black-on-black crime”. We hear this all over the place, from news columnists to Ray Lewis to Rudy Giuliani – and, most recently, reiterated by Bill Clinton.

It’s asinine, this argument that modern civil rights movements like Black Lives Matter should stop talking about actual problems in favor of apocryphal ones. During the civil rights movement there was much more homicide in the black community than there is now — black-on-black crime is shrinking. Centers for Disease Control and Prevention statistics show that from 1950 to 2013 the percentage of black men who became homicide victims dropped by a third, and for black women the percentage was cut in half.

Though murder rates were higher in the 1960s, no one in their right mind today would argue that those organizers should have put the march on Selma or the Montgomery bus boycott on the back burner to focus on black-on-black violence back then. We shouldn’t pressure today’s activists to do this either.

Yet the myth of black-on-black crime has enormous staying power. It’s no surprise that this kind of argument is so common among the likes of conservative media, Donald Trump and the police, but false hysteria about black-on-black crime has also been absorbed by liberals and black community leaders. Even Spike Lee took this stance in his recent film Chi-Raq, showing a Chicago minister telling a huge crowd that the fight against black-on-black violence is “our Selma”.

Explaining crime and poverty as a result of black behavioral choice, further, disguises ways that both are caused by capitalism. Recasting systemic inequality as cultural choice suggests that black people aren’t determined enough – that it’s their own fault they remain in poverty. Out of economic deprivation comes violence – not because poor people have bad attitudes or cultural deficiencies, but because without a real economic safety net, the machinations required for survival can involve illegal business. And whereas legal business has the police to physically enforce the laws that govern it, disputes and agreements in illegal businesses are settled and enforced by the practitioners themselves.

The argument also regurgitates the same old disproven beliefs about crime, saying that stricter gun laws would decrease violence. Calls for gun legislation are actually calls for stricter policing and more police violence in black communities:gun control laws give police more powers to arrest – and we know that these policies will be racist in their implementation. Imagine stop-and-frisk in white neighborhoods: it ain’t gonna happen. The rate of weapons arrests is multiple times higher in the black community, even though blacks are half as likely as whites to own a gun.

The myth of black crime as cover for racist violence is nothing new. In 1906 Atlanta newspapers created a fake “Negro crime wave” which culminated in the state militia and county police going door to door in a raid of every single black home in order to confiscate guns. People were beaten and murdered along the way. In the following decades, similar media-created “Negro crime waves” in Washington, New York and other cities led to the repression of black communities that follows this kind of story.

The only thing that will stop murders in black neighborhoods, or in any neighborhoods, is a higher standard of living, not laws that will be enforced through a racist lens. Economic improvement will happen only through a mass radical movement to create a system in which the people democratically control the wealth that we create with our labor.

The next time you hear someone try to shame black community activists and reinforce the myth of the black criminal, remember that it’s an old story and a fake story. And it’s time for us to move on.