Communities of color are on the frontlines of climate change.

These farmers are also on the frontlines of climate solutions.

Chief Zogli looked weary as he scratched a notch in his doorpost to record the weather. “Still no rain,” he says with resignation. The chickens pecked lazily in the dust and the goats foraged for the last of the dropped grains beneath the emptying corn crib. In this rural community outside of Odumase-Krobo, Ghana, the farmers depend on rainfall as their only source of agricultural water. Zogli explains that the rainy season has been arriving later each year and ending sooner—and the thirsty crops struggle to mature.

From the African continent to the Americas and across the Caribbean, communities of color are on the front lines of and disproportionately harmed by climate change. Record heat waves have caused injury and death among Latinx farmworkers and devastating hurricanes have become regular annual visitors in the Caribbean islands and coastal areas of the U.S.

Meanwhile, several Alaskan Native communities struggle to hunt and fish in their traditional ways because rising temperatures are ravaging the wildlife. And sub-Saharan Africa, where Ghana is located, is among the regions projected to experience the harshest impacts of climate change. “If you’re not affected by climate change today, that itself is a privilege,” climate activist Andrea Manning says. 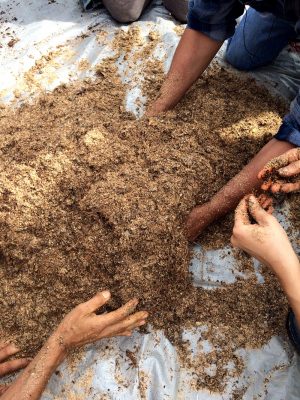 But the same communities on the frontlines of climate impact are also on the frontlines of climate solutions. A new generation of Black farmers is using heritage farming practices to undo some of the damage brought on by decades of intense tillage by early European settlers. Their practices drove around 50 percent of the original organic matter from the soil into the sky as carbon dioxide. Agriculture continues to have a profound impact on the climate, contributing 23 percent of total greenhouse gas emissions.

Now Black farmers are finding ways to capture that carbon from the air and trap it in the soil. They are employing strategies included in Paul Hawkin’s Drawdown, a guide to the 100 most substantive solutions to global warming.

One practice, silvopasture, is an Indigenous system that integrates nut and fruit trees, forage, and grasses to feed grazing livestock. Another, regenerative agriculture, a methodology first described by agricultural scientist and inventor Dr. George Washington Carver, involves minimal soil disturbance, the use of cover crops, and crop rotation. Both systems harness plants to capture greenhouse gases. “No other mechanism known to humankind is as effective in addressing global warming as the capturing of carbon dioxide from the air through photosynthesis,” Hawkin says.

Here are examples of how farmers are putting these practices to work.

After working in an auto parts store during high school, Leonard Diggs swore, “I will never have another job working inside.” True to his word, Diggs went on to manage sustainable farms in northern California for over 30 years.

Diggs is developing a 418-acre incubator farm at Pie Ranch, where beginning farmers will establish their own regenerative enterprises. In collaboration with the Amah Mutsun tribal band and nearby farmers, he is creating a landscape-level ecosystem plan that integrates forest, riparian corridor, native grasslands, perennial, and annual crops. The management practices that emit carbon, such as some annual crops, will be balanced out with perennial areas that sequester carbon, achieving carbon neutrality overall. 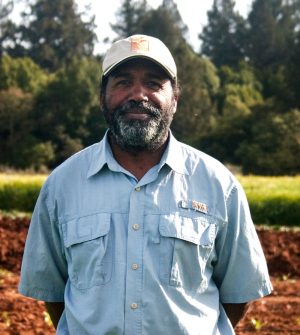 “We need to realize that working landscapes provide not just products but also ecosystem services like carbon sinks, water recharge, and evolutionary potential,” Diggs explains. He envisions a food system where farmers derive 30 to 40 percent of their income from the value of ecosystem services and do not have to “mine” the soil to make a living. He is working with researchers to establish baseline data for the amount of carbon in the soil, and the composition of bacterial and fungal communities. The goal is for the farm to capture more carbon than it releases over time.

Unlike many incubator farms that emphasize annual crops and allow farmers to stay for just a few years, Diggs is working with a longer horizon. “We need to plant orchards and perennials, get them established over 10 years, and hand new farmers a working landscape. Instead of making them leave as soon as their businesses get established, we will move the incubator to a new area, and the farmers can stay.”

“We need agriculture that does not lose our carbon, and does not deplete our people,” Diggs concluded.

Not everyone in the Black farming community is as excited about fiber as Keisha Cameron. Given the prominent role of the cotton industry in the enslavement of African Americans, many farmers eschew cultivation of textiles. “We are largely absent from the industry on every scale,” she explains. “Yet these agrarian artways and lifeways are part of our heritage.” 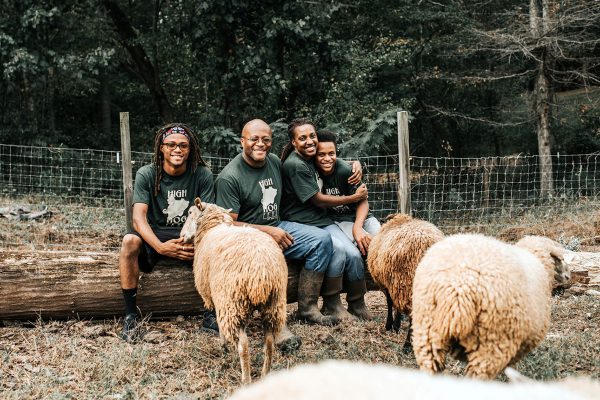 At High Hog Farm, Cameron and her family raise heritage breeds of sheep, goats, rabbits, horses, chickens, and worms in an integrated silvopasture system and sells fiber and meat. One of her favorite varieties is American Chinchillas, rabbits which consume a wider diversity of forage than goats and fertilize the pasture with their manure.

The family is also working to establish tree guilds, a system where fruit trees are surrounded by a variety of fiber crops such as indigo, cotton, and flax. Their goal is a “closed loop” where all the fertility the farm needs is created in place. They pack a lot of enterprises into a small space. “We have 5 acres,” she says playfully. “Just enough to be dangerous.”

In his book, The Carbon Farming Solution, Eric Toensmeier writes that silvopasture traps 42 tons of carbon per acre every year. This is because pasture stores carbon in the above and below ground biomass of grasses, shrubs, and trees. Also, animals that are raised on pasture have healthier digestive systems than those raised in confinement, and emit lower amounts of methane.

In addition to healing the climate, silvopasture is a joyful practice. “I get to play with sheep and bunnies. What could be better?” Cameron poses.

When Germaine Jenkins first moved to Charleston, she relied on SNAP and food pantries to feed her children. “I did not like that we couldn’t choose what we wanted to eat, and there were few healthy options. I was sick of standing in line and decided to grow my own stuff.” 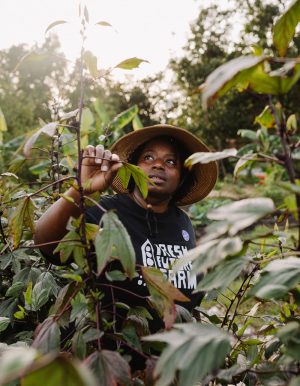 Jenkins learned how to cultivate her own food through a master gardening course, a certificate program at Growing Power, and online videos. She promptly started growing food in her yard and teaching her food-insecure clients to do the same through her work at the Lowcountry Food Bank. In 2014, Jenkins won an innovation competition and earned seed money to create a community farm.

Today, Fresh Future Farm grows on 0.8 acres in the Chicora neighborhood and runs a full-service grocery store right on site. “We are living under food apartheid,” explains Jenkins. “So all of the food is distributed right here in the neighborhood on a sliding scale pay system.”

Jenkins relies on what she calls “ancestral muscle memory” to guide her regenerative farming practices. Fresh Future Farm integrates perennial crops such as banana, oregano, satsuma, and loquat together with annuals like collards and peanuts. The farm produces copious amounts of compost on site using waste products like crab shell, and they apply cardboard and wood chips in a thick layer of mulch. “We repurpose everything—old Christmas trees as trellises and branches as breathable cloche for frost-sensitive crops,” Jenkins explains. They even have grapes growing up the fence of the chicken yard so that the “chickens fertilize their own shade.”

Jenkins’ farming methods have been so successful at increasing the organic matter in the soil that they no longer need irrigation. They are also less vulnerable to flooding. “Two winters ago, we had 4 feet of snow. Our soil absorbed all of it,” Jenkins says.

Toensmeier writes that for every 1 percent increase in soil organic matter, we sequester 8.5 tons per acre of atmospheric carbon. If all of us were to farm like Jenkins, Diggs, and Cameron, we could put 322 billion tons of carbon back in the soil where it belongs. That’s half of the carbon we need to capture to stabilize the climate.

As Larisa Jacobson, co-director of Soul Fire Farm explains, “Our duty as earthkeepers is to call the exiled carbon back into the land and to bring the soil life home.”