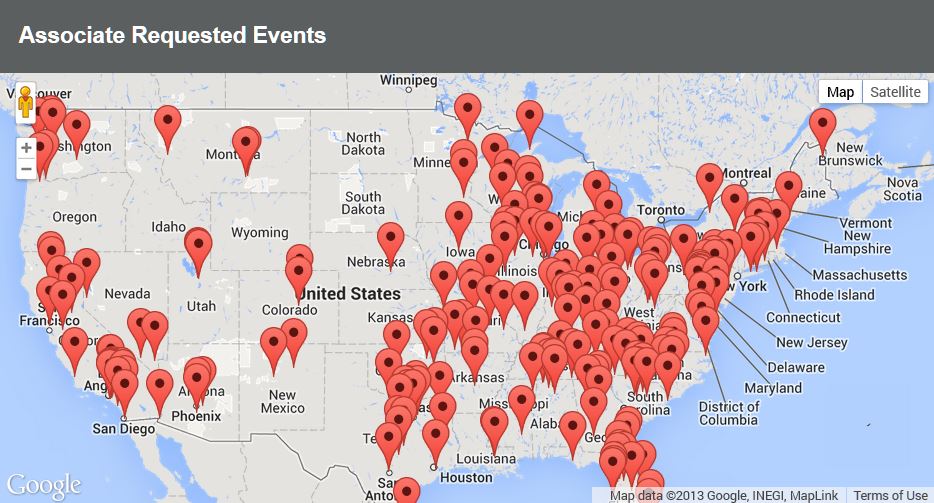 Black Friday Our Walmart Announces 1,500 Protests Across the Country

Above: Walmart Associates across the country are stepping forward to share their stories about the reality of working for the world’s largest private employer. They are coming forth to share their experiences and ask community supporters to hold Black Fridayevents at their stores. Whether these associates choose to do so anonymously or publicly, their words represent the silent majority of Associates who want to see Walmart become a better employer.

Note: We urge people to follow the lead of the Network of Spiritual Progressives which has invited its “many tens of thousands of members,Tikkun subscribers, and allies across the country to participate in demonstratons on Black Friday, Nov 29th (the heaviest shopping day of the year) in support of the Walmart workers who have scheduled 1500 demonstrations at Walmarts around the country. If you can’t find one near you, create your own and invite your friends. Below are the reasons that these workers deserve our support. It’s the perfect activity for the day-after Thanksgiving!!  — Rabbi Michael Lerner  co-chair of the NSP with Rev. J. Alfred Smith, Sr.”

“Black Friday 2013 will mark a turning point in American history.”

Walmart workers and community allies today announced plans leading up to and on Black Friday, saying 1500 protests are scheduled for across the country, in what is set to be one of the largest mobilizations of working families in American history. Workers are calling for an end to illegal retaliation, and for Walmart to publicly commit to improving labor standards, such as providing workers with more full time work and $25,000 a year. As the country’s largest retailer and employer, Walmart makes more than $17 billion in profits, with the wealth of the Walton family totaling over $144.7 billion – equal to that of 42% of Americans.

“Black Friday 2013 will mark a turning point in American history,” said Dorian Warren, associate professor at Columbia University. “Fifteen hundred protests against Walmart is unprecedented. Working families are fighting back like never before – and have the support of America behind them.

Emboldened by news from Walmart CEO Bill Simon that as many as 825,000 workers are paid less than $25,000 a year, workers and supporters are calling for better jobs nationwide. Major protests are planned in more than a dozen metropolitan cities, including Los Angeles, Chicago, Bay Area, Seattle, Sacramento, Miami, Minneapolis and Washington, DC.

The announcement follows revelations this week that many Walmart workers don’t have enough money to cover Thanksgiving dinner for their families. A photo from a Canton, Ohio store set the internet abuzz Monday, with workers,customers and commentators pointing to a food drive set up for Walmart’s own employees as proof that the retailer pays its workers poverty wages.

“Walmart’s right that associates do stick together and look out for each other. We have to because Walmart and the Waltons seem to be fine with the financial struggles that we’re all facing,” said Barbara Gertz, a five-year Walmart employee from Colorado. “We’re are all in the same situation, one that Walmart creates by paying us poverty wages that aren’t enough to cover holiday meals. We don’t want handouts; we want an employer that pays us enough to afford Thanksgiving dinner – and dinner every night of the year.”

Workers and community supporters have been inspired by actions across the country in recent weeks. In Los Angeles, workers went on a two-day strike that culminated in the largest-ever act of civil disobedience against Walmart, and last week, workers in Seattle, Chicago, Ohio and Dallas joined them in walking off their jobs.

The strikes, which call for an end to illegal retaliation at Walmart, come as the federal labor board this week issued a decision to prosecute Walmart for widespread violations of its workers’ rights. The decision will provide additional protection for Walmart’s 1.3 million employees when they are speaking out for better jobs. The Board will prosecute Walmart’s illegal firings and disciplinary actions involving more than 117 workers, including those who went on strike last June.

With the Labor Relations Board moves forward to seek a settlement that could include the reinstatement of fired workers, a group of Walmart employees who were illegally retaliated against are traveling to Bentonville, Arkansas to call on Walmart CEO Bill Simon to reinstate them immediately. Early Fridaymorning, November 22, the fired workers will visit Home Office to urge Walmart to live up to the anti-retaliation policy it professes to follow.

“I’m traveling to Bentonville with other workers who were wrongfully fired because Walmart needs to hear from us directly: we want our jobs back, and we want you to put the anti-retaliation policy you talk about into practice,” said Jeanna Slate, a fired striker, mother and grandmother from rural Texas who is traveling to Bentonville. “Walmart makes $17 billion dollars in profits while the majority of its workers make less than $25,000 a year. Walmart can do better.”

Walmart workers have escalated their online organizing and community outreach ahead of Black Friday 2013, allowing customers and community members to join the fight for $25,000 and an end to illegal retaliation. Chicago worker Charmaine Givens-Thomas launched an online petition asking President Obama to meet with Walmart workers, which currently has more than 100,000 signers; individuals can sponsor a Walmart striker online; and a new online portal,www.associatevoices.com, allows associates to step forward and request Black Friday protests at their stores. Just weeks since the launch, the number of cities that have requested a Black Friday rally is well ahead of the number at this point in 2012.

National leaders and community groups representing tens of millions of Americans, from every corner of the country, will join workers at protests leading up to and on Black Friday. Members of Congress, including Rep. Keith Ellison (D-MN); women’s groups including the National Organization for Women and Family Values @ Work; and environmental and consumer protection organizations such as The Sierra Club, the National Consumers League and Food and Water Watch, have all pledged support for the courageous workers, saying their fight is a fight for all Americans.

“I learned about the growing protests online, and after seeing the news that Walmart was asking its own employees to feed one another, I knew I had to speak out,” said Rev. Holly Beaumont, organizing director for Interfaith Worker Justice New Mexico, who plans to join protests around Black Friday. “It’s not right. Anyone who works hard shouldn’t have to rely on food stamps, or charity from their coworkers, just to get by.”

Growing voices in business and the media have denounced Walmart for its unsustainable business model. A Bloomberg columnist recently called the company the true “welfare queen,” noting that Walmart is the largest consumer of taxpayer-supported aid. Following third quarter revenues that fell short of expectations, Forbes added that shoppers, shareholders and the retail giant have reason to worry. And the New York Times argued that Walmart employees deserve both raises and tohave the federal government behind them.

As calls for change intensify, academics, business experts and think tanks are offering ways that Walmart can increase workers’ wages without costing taxpayers, customers or the business a dime. A Fortune article pointed to investors wanting change – Walmart could easily raise wages by 50% without affecting its stock value. And public policy organization Demos released a report this week finding that Walmart could easily pay every employee $14.89 without raising prices by simply not buying its own stock to further enrich the Walton family.

Walmart’s low-wage model winds up costing us all,” said Amy Traub, Demos senior policy analyst and co-author of A Higher Wage is Possible. “When the biggest employer in the country doesn’t pay its workers enough to spend money in their communities, we don’t get the economic growth that creates more jobs. And when jobs don’t pay enough to support a family, taxpayers end up subsidizing Walmart’s workforce costs through public benefits like Medicaid and nutrition assistance.”

OUR Walmart works to ensure that every Associate, regardless of his or her title, age, race, or sex, is respected at Walmart. We join together to offer strength and support in addressing the challenges that arise in our stores and our company everyday.