Above Photo: Me’Lea Conelly, Jonathan Banks and Malcolm in the hall of the Association for Black Economic Power office. Photo by Annabelle Marcovici.

“We can’t keep using the bodies of youth as the only tool for resistance,” Me’Lea Connelly, executive director of the Association of Black Economic Power (ABEP) said, “we need something else.”

In the wake of the killing of Jamar Clark on Nov. 15, 2015 and the ensuing Fourth Precinct occupation, followed less than a year later by the killing of Philando Castile on July 6, 2016, Connelly recalled a drive for a concerted effort with movement organizers to diversify tactics of resistance against police brutality.

A meeting was called, and after hours of conversation with a cross section of community, the group voted to create Minnesota’s only Black-led financial institution in North Minneapolis.

A symbiotic relationship exists between ABEP and Blexit. Connelly described Blexit as the incubator and nest where ideas put forth by the community are percolated. ABEP puts them into action. The ABEP Executive Committee composed of – Connelly, Brett Grant, Ron Harris, Amber Jones, Danielle Mkali, Felicia Perry and Y. Elaine Rasmussen – are leading the effort to build the foundations of the credit union while still remaining deeply grounded in the conceptions of resistance movement.

But really, Connelly said the decision to launch was an outcome largely driven by community input and demand.

The new credit union, now called Village Trust Financial Cooperative, “was a community effort,” Connelly said, “a lot of participants who were from North Minneapolis believe [building a Black-led financial institution] is the most important work that we can do right now to change what is happening in our community.”

“When you don’t have foundational financial institutions at the roots of certain communities, it’s very difficult for them to become economically healthy and strong,” she explained.

To ABEP, the establishment of a credit union in North Minneapolis is a branch of activism and a means of community protection. While a bank is owned by shareholder and is a for profit institution, credit unions are owned by its members.

“A credit union is a cooperative so the purpose here is to benefit those members,” Connelly declared. “It’s not about making money, it’s about moving money. It’s about velocity and circulation of money.”

The average annual percentage rate (APR) on payday loans in Minnesota is 273 percent, and according to Exodus Lending, a nonprofit dedicated to helping Minnesotans get out of payday lending debt, about 30,000 Minnesotans are trapped in a cycle of debt through payday loans. The severe consequences of debt resulting from a systematic lack of access to bank loans or credit cards disproportionately impacts people of color, especially in times of need.

While new regulations have tried to curtail the damage of payday lending, a disproportionate number of Black residents do not have fundamental access to credit and equitable loans.

Racist lending practices run deep in Minnesota too. A report published from the University of Minnesota Law School’s Institution on Metropolitan Opportunity concluded that banks in Minneapolis and St. Paul are nearly four times more likely to give subprime loans to high-income Black residents than low-income white residents. Large banks have a record of issuing exorberant subprime mortgages for homes fueling the disenfranchisement of Black people. The National Community Reinvestment Coalition published a report declaring that Black people living in the Twin Cities Metro area, around 7 percent of the population, were receiving a scant 2 percent of mortgage loans. The same UMN report noted that banks such as Wells Fargo failed to distribute mortgage loans proportionately in areas with predominantly residents of color.

Connelly and her Village Trust colleagues are concerned by the exploitative and predatory environment in North Minneapolis and hope that the credit union will provide a different outlet – while also maintaining key products and services to help people succeed financially. The primary differences between Village Trust and traditional financial institutions are that Village Trust would work to lower interest rates and make all exchanges equitable and affordable. This foundational service is one that ABEP believes every single neighborhood in America needs to have.

Village Trust seeks to provide a place where members can have anything from a payday lending service to college savings account, access to car loans, or financial education. Above the expected services of a financial institution, leaders of the new credit union hope to build a space where staff are, according to Connelly, first and foremost “kind and understand you on a cultural level.”

Stephannie Lewis, a Minneapolis resident who grew up on the Northside felt it was important to pledge her support for Village Trust because the movement to build a Black-led credit union touches on her personal experience.

“Historically, I have a family that tried to start their own business and had no clear access to capital,” Lewis said. “Seeing and going through that journey has been a frustrating experience for me. If we have an institution which […] can provide those services and has that understanding, it would be beneficial to generate wealth in that community. I want to make sure other people with great ideas have access to the capital they need too so those ideas can flourish.”

A Black-led credit union becomes a powerful tool in North Minneapolis, but Connelly is quick to point out that these cooperative tactics are not unprecedented in the Twin Cities community.

“To be honest,” Connelly emphasized, “this is not new, this is not revolutionary. We’ve had Black-credit unions here before. And they have been quite successful […] We can look at history and see that it’s helped the Black community in the past get out of dire situations.”

In fact, a Black-led credit union in the Credjafawn Social Club of the historic Rondo neighborhood provided accessible financial options for local residents. From 1956 to 1968, the construction of Interstate 94 through Rondo destroyed the neighborhood, taking with it many cultural and business institutions that helped Rondo thrive. As Ron Harris, senior policy aide and ABEP Executive Committee member pointed out, “We are standing on the shoulders of our ancestors who have done this before.”

ABEP recognizes this lineage and seeks to reinvigorate equitable and cooperative financial practices in Minnesota. “There’s definitely a desperation, there is definitely a need,” Connelly said “There are people who have their business ideas and they’re looking for funding. […] They’re hoping this will be a place that you know is more gracious to our Black business owners and not see them as added risk, but see them as promising potential for our communities.”

Malcolm Wells, an activist involved in the inception of Blexit and active with ABEP said, “far too often we see Black leadership in the community and we don’t have enough infrastructure or foundation behind for [their initiatives] to withstand the test of time.”

Connelly sees building a credit union in North Minneapolis specifically as a risk that “other commercial, for profit banks and credit unions have been unwilling to take.” Connelly eschews reductive generalizations about North Minneapolis that construe the community as “risky” or a “bad place” to set up a business. 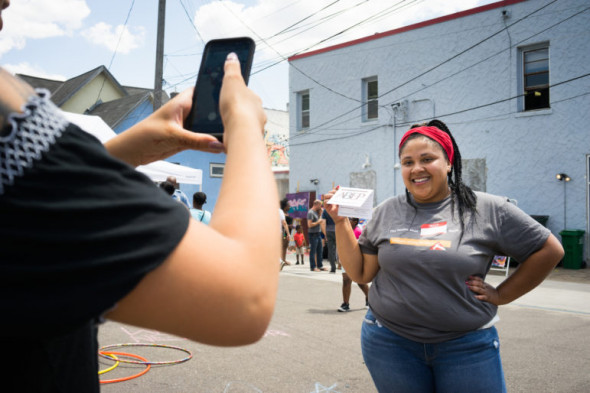 Just as the decision to begin the journey of establishing a credit union in North Minneapolis began through collective response and community-led decision making, ABEP continues to reiterate the importance of collecting feedback and remaining grounded in pursuing community needs.

Supporters who signed the Blexit pledge to open up an account at Village Trust Financial Cooperative said they joined because “owning is power,” and “we can’t wait for the government to invest in Black communities,” to “I want to reclaim our community cultural wealth.”

ABEP has received the overwhelming refrain that this effort is a long time coming. With a small laugh, Connelly remarked how the first question she is often asked by Black community members is “when can I move my money? When are you opening?”

When stepping into a financial institution, Lewis believes its is important “to see somebody on the other side of the desk that looks like you. You have a shared history, you have a shared story.” As she imagined the opening of the credit union she said, “It’s going to be very comforting to know when I walk in there they know my story. It will be to know that when you walk into a bank that they are here to legitimately serve you, and that means something.”

Speaking about her experience on the Northside she said, “we only have one bank on the Broadway corridor and it is kind of intimidating when you walk in. You get the once-over. You feel like you don’t belong.” To Lewis, supporting the credit union is “a unique opportunity for me to put my money where my mouth is.”

Support to sustain the future

The road ahead is still long as ABEP works to establish a federally chartered Black-led credit union by 2019.

In the meantime, ABEP needs to build its membership and generate widespread support. Currently, there is a pledge circulating where supporters can commit to transitioning their money over to the new credit union. ABEP will submit a report generated from the information gathered from the pledge to the National Credit Union Administration, so they can be issued a charter.

Not only does the pledge ask supporters to commit to transferring money to the credit union once it is open, it also asks supporters to declare a personal act of solidarity and civil resistant. The pledge prompts supporters to actively divest from financial institutions with racist practices that systematically disenfranchised Black communities. By pledging, you commit to, “no longer wholly and blindly participate in systems that benefit from the pain of Black people.”

For this to happen, allyship is key. While centered first and foremost on advancing and uplifting Black communities in North Minneapolis, ABEP is seeking support from communities across the Twin Cities, encouraging residents that involvement can take many forms. “We really need the larger businesses, corporations, city accounts, county accounts to step up and say, you know, what are some things that we can do to support this effort, because it’s really needed and it’s going to benefit the whole city.”

To Y. Elaine Raussmassen, chief executive officer of Social Impact Strategies Group and a member of ABEP Executive Committee, the power of the credit union rests in its ability to democratize the financial sector to benefit the whole society.

“I want to be clear,” she remarked, “while it remains important for people of color to drive this effort, everyone will benefit from this credit union. Financial services in Minneapolis have left out Black residents, but they have also left out Hmong residents, immigrants and Native residents.”

When asked what sustains her through the work, Connelly’s characteristic impassioned tone softened, “It really does come back to the origin of Blexit,” she said. “I keep thinking about young people, not just my children, but thinking about where we are as a country.”

Connelly is an activist, but also a mother. She recalls the kick-off meeting for Village Trust last month where they passed out T-shirts sporting the newly voted name with pride. The next day her son wanted to wear the shirt to school.