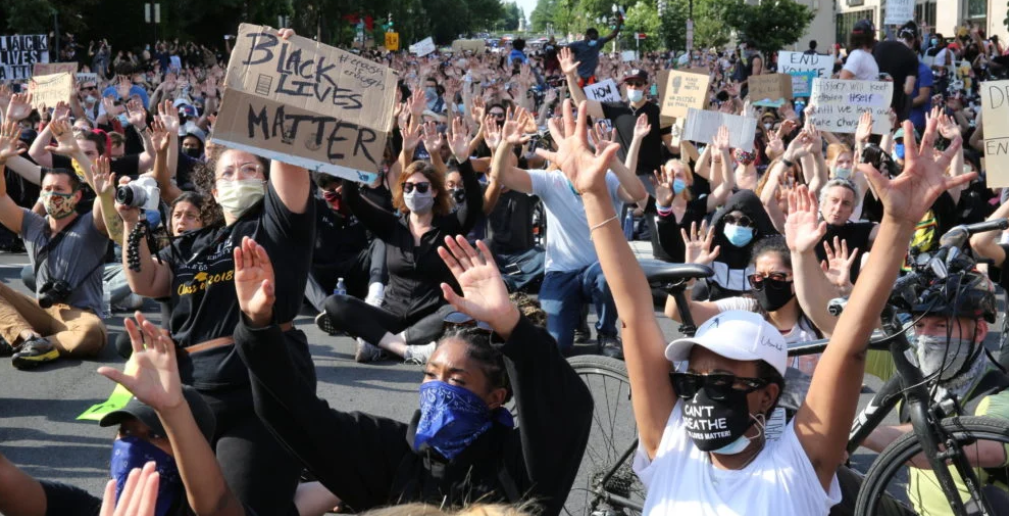 Above photo: By Evy Mages.

‘Tell the racists that they’re not welcome in our city!’

“Mayor Bowser, Deputy Chief Contee and local businesses, tell the racists that they’re not welcome in our city,” said Née Née Taylor, a core organizer with Black Lives Matter DC (BLM-DC). “Earlier this month, the mayor, the police and local businesses aided and abetted white supremacists by allowing them to run rogue across our city, desecrating Black churches, violating Black Lives Matter Plaza, all while refusing to wear masks and socially distance.”

1. Denounce all white supremacists who plan to come to DC around January 6 to overturn the results of a legitimate election and attack DC residents. BLM DC calls on Mayor Bowser and all members of the DC Council to publicly declare our city a hate-free zone and to immediately denounce all acts of hate.

2. Refuse to do business with white supremacists and hate groups who incite violence. On Monday, Hotel Harrington and Harry’s Bar made the right decision to remain closed during the planned protests in DC for January 6. We are calling on Holiday Inn Alexandria, Hyatt Place Washington DC/White House, Washington Marriott at Metro Center, Holiday Inn Capitol Hill and the Willard Hotel to do the same.

In the past, white supremacist groups have caused violence and property destruction in our city, targeting BIPOC community members and institutions, including two Black churches. Now, as they prepare to return to DC in response to Trump’s call – a last-ditch, delusional effort to achieve a continuation of his presidency – they are publicly promising more violence and destruction, including bringing illegal weapons into DC and murdering anyone who they deem to be “traitors.” See screenshots here.

3. Enforce mask and social distancing requirements as well as COVID-19 ordinances for out-of-town visitors. Businesses must be fined if they do not enforce social distancing and mask protocols. BLM DC calls on businesses to keep our community safe and police and public health officials to support those businesses by forcing compliance.

4. Protect our sacred Black spaces. White supremacists attacked historic Black churches and they attacked Black Lives Matter Plaza, where we memorialize Black people who were killed by police. The authorities have no problem keeping the White House — and the white man inside — safe; Black people expect and demand no less for our sacred Black spaces, including Black churches and Black Lives Matter Plaza.

BLM-DC also calls upon Black and brown people, if possible, to avoid Trump support rallies and actions. They ask that Black and brown residents stay alert and vigilant during the upcoming white supremacist invasion. Leaders of the group — outraged by the failure of the mayor and police to protect them and by violent police action against Black people and others who oppose racism during the last white supremacist attacks — are asking all DC residents to hold the city officials and businesses accountable.

“We encourage Black and brown people to stay away from known areas where white extremists and militant gangs will gather on January 6th and, instead, use your voices and your power as constituents and consumers to demand that the mayor, city council, police and businesses stand up against white supremacy,” said Marybeth Onyeukwu, “Some of the hotels that have issued statements in support of Black Lives Matter in the past are opening their doors to Proud Boys and other white supremacists. We’re putting them and every business on notice: we don’t need your lip service, we demand concrete action. Make your customers and guests aware that you reject white supremacy and white supremacists. Make your businesses ‘hate-free zones’ to protect your staff, guests and city.

“Mayor Bowser plays a progressive politician on TV but, when the cameras dim, she is complicit in the very police violence that the movement that inspired Black Lives Matter Plaza seeks to stop. Mayor Bowser, we all have cameras and they’re recording you. We want you to be the leader you play on television and stop these so-called Proud Boys and blatant white supremacists from running roughshod over our city. Mayor Bowser, if Black lives really matter to you, then protect all of our sacred spaces — our churches, our BLM Plaza and our communities. But most of all, protect us; protect Black people’s rights and lives.”

While BLM DC will not be in the streets on January 6, 2021, leaders and activists are mounting a public education campaign now to demand justice. Those who support Black Lives Matter and oppose white supremacy are encouraged to send messages to businesses and public officials in support of the four demands.