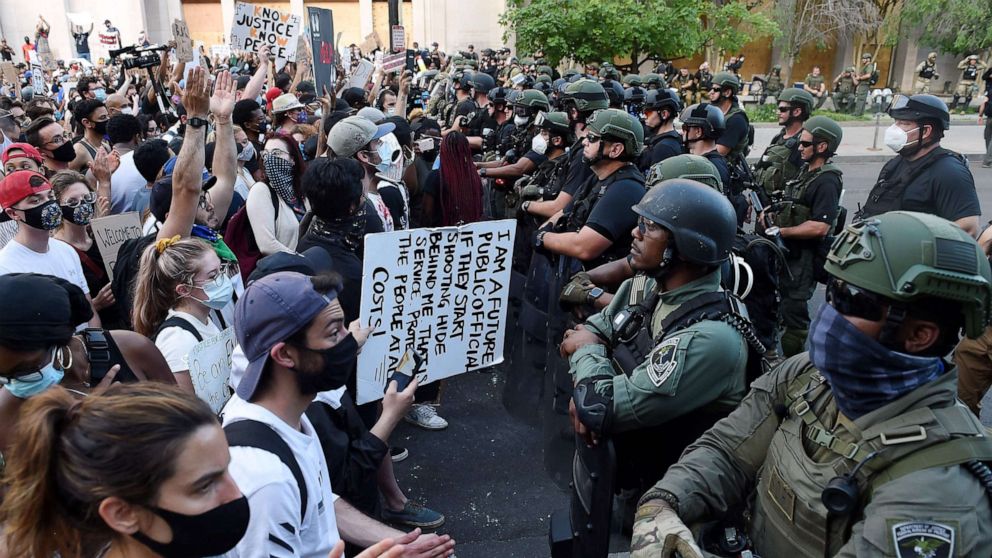 Above photo: Police face off with demonstrators near the White House during a protest over the death of George Floyd in Washington, DC, on June 3, 2020. Olivier Douliery/AFP via Getty Images.

On Sunday August 1, 2021 we were alerted to a video of a Metropolitan Police Department (MPD) officer brutally punching Kimon Johnson in the head in Southeast D.C. This kind of brutality is not new for MPD, in the District of Columbia, and certainly not near Good Hope Rd. and 16th St. Southeast, but it is always unacceptable. It mirrors the experience of Derrick “Quan” Johnson at almost the same location on December 26, 2019. Quan was also not charged for the original stop or the second retaliatory one. Like Quan, we are so very glad he is still alive.

As we predicted, his response to this brutal incident Chief Contee did little more than give a measured response at the August 9, 2021 press conference. As we explained when he was confirmed and have since learned about his complicity in the misconduct by the Gun Recovery Unit (Jumpouts) against almost only Black people, we could hardly expect more from him. MPD continues, with Mayoral sanction, to abandon the presumption of innocence, act as prosecutor, judge and jury intentionally ignoring the requirements of probable cause and reasonable suspicion. The description of what led to the incident includes alleged information that is beyond the scope of probable cause and reasonable suspicion. It reads like a statement of charges that in reality can only be made by a prosecutor, and implies guilt and justification to sway public opinion. Mr. Johnson’s lawyer’s expressed the same at today’s Press Conference.

Contee states, “The actions demonstrated in the social media video of Metropolitan Police Department officers seizing a gun from a suspect are inconsistent with the training and the values of the department.” That is just not true. MPD’s values guide officers’ behavior such as driveby murders, domestic abuse, illegal stop and frisk, sexual assault during searches, white supremacist t-shirts, sexual assault of sex workers, gun trafficking, racist social media posts. The Chief continues, “All of our officers are equipped with body worn cameras so that we have a full account of any interactions they have with the public.” Simply wearing a body camera means nothing if officers are consistently out of compliance with their use. According to the DC Police Complaints Board Office of Police Complaints’ 2020 Annual Report “Overall, a total of 32% of investigated cases in FY20 with BWC video included some form of BWC non-compliance.”

Mayor Bowser and Chief Contee have nothing to be applauded for, nothing. Similarly, the Council will do nothing as they have already sold out by “compromising” the hiring of more cops. They double-talked their way through last summer’s uprisings, passed a weak reform bill, created a reform commission then ignored its recommendations, and just last week increased MPD’s budget. Lastly, Mayor Boswer will likely not say more than she already hast unless the national media provides another stage for her next Black Lives Matter performance.

The current increase in the cycle of community violence is already being used to justify this brutality. To be clear, from January 1, 2020 to December 31, 2020 MPD says it made 80,698 stops. Black people made up roughly 46% of the D.C. population, but 74.6% of the people stopped. Yet only 1.0% of all stops and 2.2% of all non-traffic stops led to the recovery of a firearm.

The name and history of these cops will be protected more effectively by Mayor Bowser and Chief Contee than they protect people from violence in the neighborhoods (our neighborhood in this case) they patrol. Most of our fellow community members will continue to see this as an isolated incident by “bad apples” instead of recognizing the actual problem is the system of policing. The entire District government continues to prioritize the police over the people in the name of public safety then pat themselves on the back. They will continue to pray on and exploit the pain and anger of our communities and the grief of our families so as to justify the brutal and illegal policing they do. They will try to get our communities to believe that this kind of violence must be tolerated in order to address community violence. This is not only false it is dangerously intentional.

Black Lives Matter DC is a member based abolitionist organization centering Black people most at risk for state violence in DC, creating the conditions for Black Liberation through the abolition of systems and institutions of white supremacy, capitalism, patriarchy and colonialism.