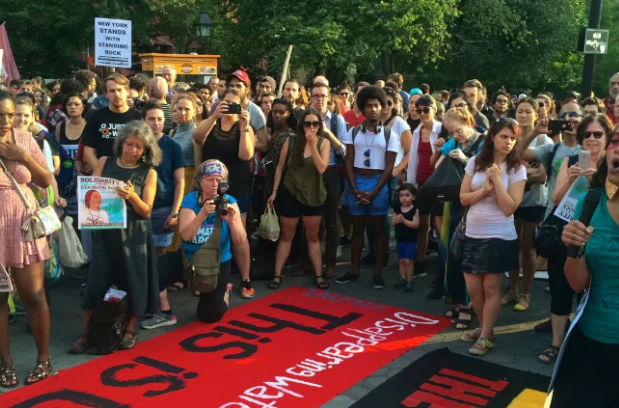 Above Photo: via Ashoka Jegroo

There’s been growing solidarity between the #BlackLivesMatter and #NoDAPL movements in recent weeks, and activists in New York are looking to strengthen that bond even more.

On Aug. 27, Black Lives Matter activists from Minneapolis and Torontotraveled to the Standing Rock Indian Reservation, which straddles North and South Dakota, to support indigenous tribes protesting the construction of the Dakota Access Pipeline (DAPL). On Sept. 2, BLM’s national chapter released a statement expressing its solidarity with #NoDAPL protesters. And now, members of New York City’s most active BLM groups plan on visiting Standing Rock this week to prevent the proposed 1,172-mile, four-state oil pipeline from being built on Native treaty lands.

“We decided that we really need to stand in solidarity with the tribes out in Standing Rock because we know very well that all of our struggles are connected, and until we unite, we’re never going to win,” Kim Ortiz, organizer of NYC Shut It Down, told me.

NYC Shut It Down is one of several grassroots, anti-police brutality groups from New York City that will be in Standing Rock from Sept. 14 to 18. Its goal? To deliver supplies, and support a coalition of hundreds of tribes that want to stop the DAPL’s construction. Other groups traveling there include Millions March NYC, Copwatch Patrol Unit, and Equality for Flatbush, all of which are active in the city’s Black Lives Matter movement.

Despite the Obama administration’s support, however, Friday evening’s rally went on as planned because activists “do not see [the statement] as having any teeth,” Rally for Standing Rock organizer Audra Simpson said.

And so, hundreds gathered in Washington Square Park for several hours of speeches, songs, drum-beating, and chants of “water is life.” Organizers also collected piles of donated items—including school supplies, tents, blankets, sleeping bags, medical supplies, and coats—a portion of which will be delivered to Standing Rock by the BLM contingent.

For the activists, this kind of support between black and indigenous movements is the only way they’ll be able to defeat their common oppressors.

“It’s a pronouncement of solidarity, empathy, and support for each other in our intersecting movements and attempts to stay alive in a settler state that has targeted us differently for life and for death,” Simpson, a Columbia University professor of Mohawk descent, said.

Red Sky Harjo, a 22-year-old student, communicates regularly with his father and three cousins who are currently protesting in Standing Rock. Harjo said he was happy to witness unity among the various indigenous tribes protesting the DAPL, as well as BLM’s support for their cause.

“We have all these nations coming together, which I don’t think anybody ever thought was possible. And with Black Lives Matter, it’s just an added plus for the two movements to stand in solidarity with one another,” Harjo told me at Friday’s rally.

“I’ve been down with the Black Lives Matter movement since the beginning because white America just doesn’t understand the residual effects that going through slavery and going through a genocide has on future generations.”

“It’s just an added plus for the two movements to stand in solidarity with one another.”

Abby Rojas, a 22-year-old Mexican American of Tlaxcaltec descent and member of NYC Shut It Down, organized BLM’s upcoming trip to Standing Rock. Rojas said she was first inspired to join the #NoDAPL movement after meeting Victor Puertas, an activist with the anti-DAPL collective Red Warrior Camp, who told her about the situation. Then she and Ortiz found out about Defenders of the Water School, a makeshift Native school at Standing Rock, on Twitter. They decided to help by donating school supplies, but soon expanded the purpose of their trip.

“It all began when the donations began for the new school that’s coming up in Standing Rock, and everyone in NYC Shut It Down was willing to help. So we just decided to go as a group to help out the school,” Rojas told me. “But it became a bigger thing. Now, we’re just looking for supplies for the whole camp.”

In addition to the supplies collected at Friday’s rally, NYC Shut It Down set up a GoFundMe page on Aug. 31 to collect donations for protesters at Standing Rock, and ultimately raised $4,782. The activists are using this money to buy school supplies and fund their trip to North Dakota.

Imani Henry, a community organizer with Equality for Flatbush, is one of several New York-based BLM activists who traveled to Standing Rock earlier than the rest of his colleagues. “I am in solidarity to bear witness to this struggle, lend a hand in the kitchen, bring supplies, and do whatever is asked,” Henry, who flew to North Dakota on Sept. 9, told me via Facebook Messenger.

Beyond donating supplies and showing solidarity, one group called Copwatch Patrol Unit plans to act as a watchdog against police and private security forces, which reportedly behaved aggressively towards #NoDAPL protesters earlier this month.

“We are going to stand in solidarity with the Standing Rock Reservation after media reports of road blockades, security attacking people with dogs, and rumors of law enforcement overstepping their boundaries,” Michael Barber, a member of Copwatch Patrol Unit, told me at Friday’s rally. “So I’m going there to live-stream and document the police state that we all live in right now. Basically, the revolution will be televised.”

Much like the indigenous tribes they’re supporting, Black Lives Matter activists from New York City see themselves engaged in a fight against state violence, oppression, and exploitation. For these activists, black and indigenous struggles are intimately tied together.

“I think we’re starting to see that a lot of these movements are related, that there’s intersectionality between issues of social justice and issues of environmental racism,” Tara Houska, national campaigns director of the indigenous environmental-justice group Honor The Earth, told me. “We know that our communities are not only targeted by police and killed at a disparate rate by police officers, we also know that our communities are targeted at a disparate rate by these projects.”

Solidarity between Black Lives Matter and indigenous tribes are part of a long tradition of black and Native unity in the face of injustice, activists say.

“Solidarity and kinship between African peoples and the peoples of the Americas is almost 500 years old,” Equality for Flatbush’s Henry said. “We proudly have fought together in wars against European invaders and slavery, from Jamaica to Florida and elsewhere. This is why thousands of people of color claim both black and indigenous nations as their racial and cultural identities.”

Activists on both sides see these movements as urgent battles for survival.

And since black and indigenous people have historically been victimized by the state, activists on both sides see these movements as urgent battles for survival.

“We’re talking about forced enslavement, dispossession, corporate privatization of natural resource, and we see this from the Bronx to Flint to Standing Rock. And the key point is that this entire system is made possible by the police institution, by the prison system, which functions as the enforcement arm of this violent system,” Vienna Rye, an organizer with Millions March NYC, told me over the phone.

“Standing Rock is really the epitome of why reform continues to kill us, and why we need abolition. These institutions have proven, time and time again, that they can’t be reformed. Standing Rock is evidence 400 years later.”

Ultimately, though, both movements are cooperating because they know they’re much stronger together than apart.