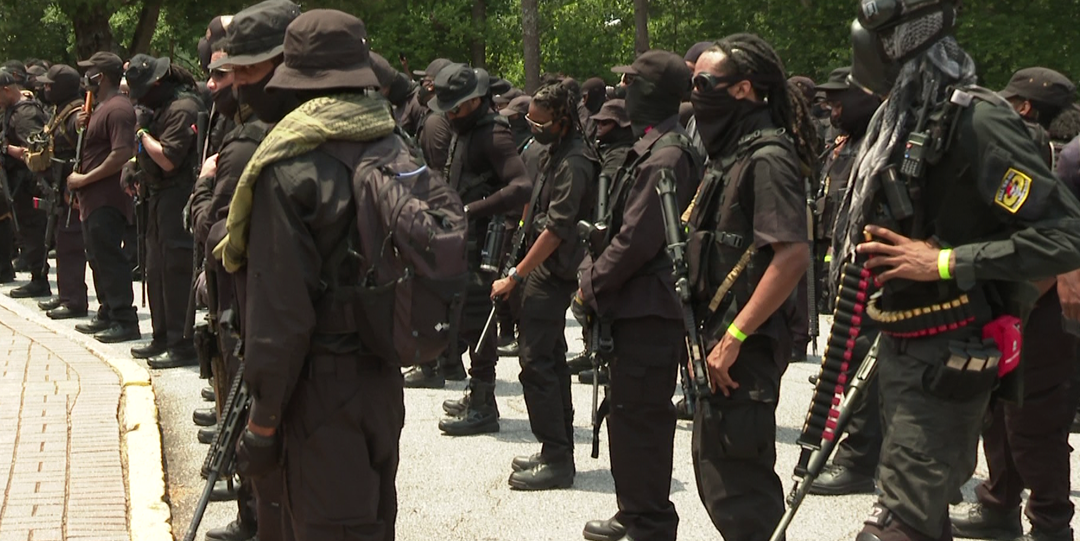 Newsweek reports “About 1,000 heavily armed militia, all of whom were Black, marched through Georgia’s Stone Mountain Park on Saturday, challenging white nationalist groups in the area to either come out and fight or join them in demonstrating against the government. Stone Mountain State Park officials said the Black militia group was peaceful, orderly and escorted by police as they called for the removal of the country’s largest Confederate monument near Atlanta.”

The Black militia is calling for the removal of the Confederate monument etched into Stone Mountain, GA. In 1915, the United Daughters of the Confederacy gathered and hired sculptor Gutzon Borglum to design a confederate monument, the Associated Press reported. The 1915 movie, “The Birth of a Nation,” which portrayed the resurgence of the Ku Klux Klan, made Stone Mountain a prominent symbol as a burning cross was lit upon it Thanksgiving night.

Many view Stone Mountain as a memorial to racism, and prejudice against Black people and are calling for its removal.

While we’re having the conversation about Confederate statues, I grew up 5 minutes from Stone Mountain, visited it often as a kid, and I don’t say this lightly: dynamite that bitch pic.twitter.com/DpNj1SaLUT

It has been a site used for the racist KKK to hold rallies and where the Klan was reborn. As Reuters reports, “Stone Mountain has long held symbolism for white supremacists. The Ku Klux Klan, a hate group that was formed by Confederate Army veterans and has a history of lynchings and terror against Black people, held its rebirth ceremony atop mountain in 1915 with flaming crosses. Klansmen still hold occasional gatherings in the shadows of the edifice, albeit now met with protesters behind police tape. Many of those cross-burnings took place on or around July 4.”

It is the world’s largest monument to white supremacy, completed in 1972 after the Civil Rights Acts were made into law. It was a way for racists to show that white supremacy still ruled.

IN PICTURES: From ceremonies to cross-burnings to marches, the history of the Confederate monument on Georgia’s Stone Mountain is inseparable from that of the Ku Klux Klan and white supremacy pic.twitter.com/K66eocuhr1

“NFAC Founder Grand Master Jay told Newsweek via phone Sunday that the militia members at Stone Mountain on Saturday were “100 percent Black” and they are not affiliated with Black Lives Matter. ‘We are a Black militia. We aren’t protesters, we aren’t demonstrators. We don’t come to sing, we don’t come to chant. That’s not what we do,’ he said.”

Here he gives instructions to the assembled Black militia.

And, here they march through the neighborhood near Stone Mountain, which is now a Black suburb. The NFAC is not Black Lives Matter or the Black Panthers.

This group of people are actually the #NFAC (not f*cking around coalition). They are a heavily armed Black Militia. And they are getting larger‼️ They are NOT⚠️ the same as the Black Panthers. pic.twitter.com/G8IwFBoeNM

Heavy reported “John Bankhead, the Stone Mountain Memorial Association’s spokesman, said the group came in at around 2 p.m. and the remained of the protest was largely orderly and peaceful, WXIA-TV reported. The group made its way to the north face of the mountain where Jefferson Davis, Robert E. Lee and Stonewall Jackson are carved.”

All Hip Hop reported the diverse reactions to the Black militia:

Those that simply witnessed the formation seemed to be impressed and inspired.

“I honestly haven’t seen anything this beautiful before, I am in tears right now. I hope they show those Confederates exactly how serious they are about this bulls##t,” one person said on social media.

All of the feedback was not positive. Some people, mostly white, expressed fear.

NFAC gathered in the Georgia neighborhood where Ahmaud Arbery was shot and killed by two white residents while unarmed and out jogging.  NFAC was also previously seen during a George Floyd protest in Minneapolis where they were reportedly protecting Black-owned businesses amid the unrest in May.