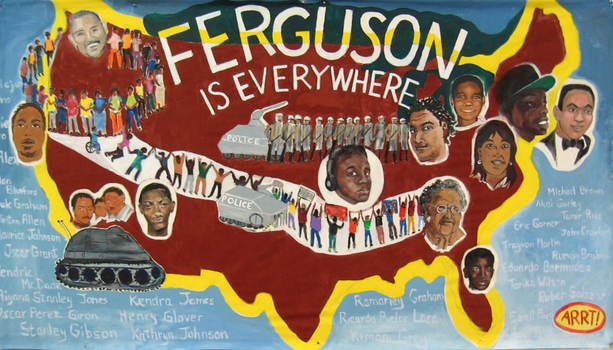 Above Photo: From CreativeResistance.org. Ferguson Is Everywhere by Natasha Meyers.

Other organizations working in collaboration on the video include the Dream Defenders, BYP 100, the DC Palestinian Film and Arts Festival, the Institute for Middle East Understanding, Jewish Voice for Peace, and the Arab Studies Institute-Quilting Point Productions.

The artists and activists claim that Black-Palestinian solidarity is neither a guarantee nor a requirement — it is a choice. They say the video is a message to the world as much as it is a commitment among themselves that they will struggle with and for one another. The powerful message is this:

We choose to build with one another in a shoulder-to-shoulder struggle against state-sanctioned violence.

A violence that is manifest in the speed of bullets and batons and tear gas that pierce our bodies.

One that is latent in the edifice of law and concrete that work together to, physically and figuratively, cage us.

We choose to join one another in resistance not because our struggles are the same but because we each struggle against the formidable forces of structural racism and the carceral and lethal technologies deployed to maintain them.

This video intends to interrupt that process — to assert our humanity —and to stand together in an affirmation of life and a commitment to resistance.

From Ferguson to Gaza, from Baltimore to Jerusalem, from Charleston to Bethlehem, we will be free.

Enjoy the video below and let us know what you think.