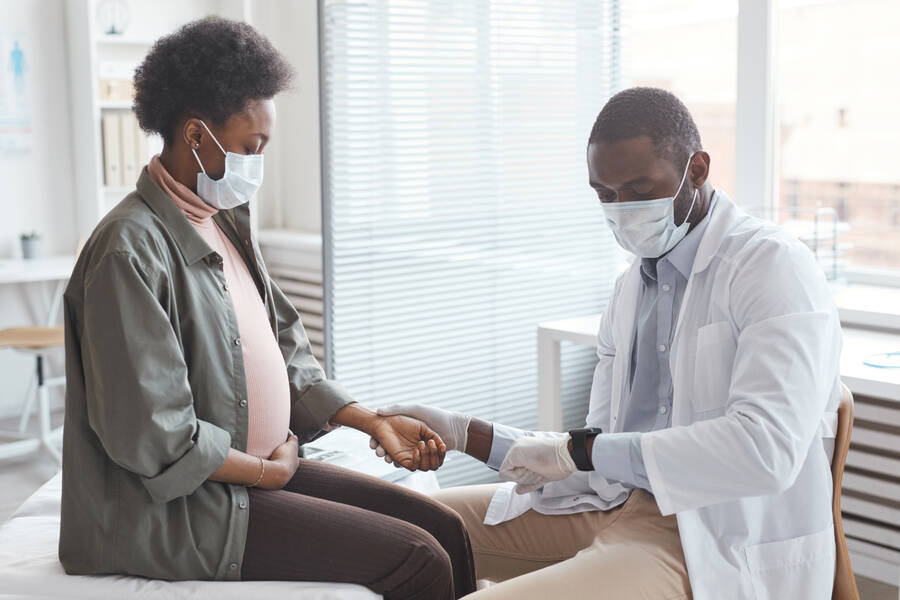 Black Women Will Face The Brunt Of Abortion Bans

The Solution Is Universal Healthcare.

Those Who Claim To Be “Pro-Life” Should Also Advocate For A Healthcare System That Guarantees Support For Black Mothers And Babies Most At-Risk Due To The Overturning Of Roe.

On July 29, Louisiana reinstated a controversial abortion ban, which led to the immediate cancellation of procedures in the state. Following the Supreme Court’s overturning of Roe v. Wade in late June, a number of states across the country have moved to outlaw abortion, and in Louisiana, women in poverty will bear the worst burdens of the newly reinstated ban. These women are the true experts regarding the fatal risks of taking away reproductive freedom in the state — not anti-abortion politicians.

The politicians gutting abortion rights likely don’t understand the pain of holding a friend as she sobs on the bathroom floor, assuming it’s the worst menstrual cycle of her life, only to discover that she is experiencing a missed miscarriage and her life is at stake. But I do.

I also understand that seeking emergency care as Black women in Louisiana can feel painful and frightening, leading countless Black women to simply “tough it out” at home. Sen. Bill Cassidy (R‑La.) recognizes this healthcare disparity, as well. Recently, he shared in an interview that the high maternal mortality rate in Louisiana wouldn’t be as bad if you simply discounted Black women altogether. He went on to say that, “For whatever reason, people of color have a higher incidence of maternal mortality.”

Getting specific about those “whatever” reasons would require acknowledging both endemic racism and the racial wealth gap in Louisiana. Even Louisiana Right to Life, a well-known anti-abortion group, has reported that, in 2021, 65 percent of abortions were performed on Black women in the state. Unfortunately, they don’t include statistics regarding the institutionalized racism that contributes to an increase in Black women seeking abortion services: Among the top reasons Black women choose abortion are lack of access to financial and educational resources, fewer support systems and life-threatening health circumstances.

In response to the overturning of Roe, one Louisiana resident, anti-abortion activist Charles Carpenter, called abortion a “curse that has been upon this land.” Ironically, the reproductive rights of women are being characterized as a “curse” on Louisiana rather than the history of slavery and sexual violence in the state that has disrupted Black women’s bodies and autonomy for generations. With the banning of abortion, the fate of poor Black women — those who face the most health complications from pregnancy—is once again being decided by wealthier white men who make up the state’s political class.

While women of all races experience more poverty than men, Black women account for 22.3 percent of women in poverty, yet only make up 12.8 percent of women in the United States. Poverty is a major contributor to maternal death and closely correlates with higher infant mortality rates. Therefore, protecting unborn Black babies must include protecting under-resourced Black women who already are parents or will become parents, including expecting Black mothers who are three times more likely to die from health complications due to pregnancy.

Since Louisiana’s anti-abortion political commentators and elected officials, including Democratic Gov. John Bel Edwards, call themselves “pro-life,” they should also be advocating for universal, equitable healthcare systems as part of their agenda. And the same should apply to anti-abortion activists nationwide.

Those who consider it a moral imperative to protect the lives of unborn children should find it necessary to support the well-being of over 3 million Black children (a number likely to increase) born into poverty across the U.S. by supporting universal healthcare policies.

Contrary to popular anti-abortion beliefs, equality does not begin in the womb. The United States is one of the worst developed countries for children living in poverty in the world, and systematic inequality creates a layer of multigenerational poverty uniquely experienced by Black families well before children are born.

Experts agree that funding mechanisms set in place by a universal healthcare system would make higher-quality care possible. In the United States, universal healthcare could begin to dismantle health-based racism by encouraging the funding of anti-racist initiatives that allow Black women to receive the same higher-quality care and equal access to reproductive education as white women.

Impoverished Black women also often have limited access to diapers and other care items that babies need to be healthy, but in countries like Taiwan where there is universal healthcare, formula and diapers are covered as part of care.

Are anti-abortion Republicans (most of whom are white political conservatives or conservative Christians) ready to advocate for universal healthcare that will support all children, especially those born into financial crisis?

In most cases, the answer would be no, with only 25 percent of Republicans supporting universal healthcare while being three times more willing than those of other political parties to eradicate Medicare. Among elected GOP officials, there is no consideration for the racial wealth income gap that has existed since slavery, especially in the American South. And reparations are still being pushed off the table.

While universal healthcare is considered a “radical” idea among the U.S. political establishment, it is somehow less radical to mandate what women can do with their bodies while ignoring how deeply entrenched societal racism is in our country—racism that leads to poorer health outcomes for potential Black mothers and newborn Black babies.

As reproductive justice activists continue taking to the streets and political offices to protest the fall of Roe, we should also challenge narratives that remove responsibility from anti-abortion supporters when it comes to providing care for Black mothers, who will be more in need under strict abortion limitations. One way to do that is to push strongly for a truly universal healthcare system.

Last year, the State-Based Universal Health Care Act of 2021 (H.R.3775) was introduced in Congress which would offer funds to states in order to compel them to provide 95 percent of residents with comprehensive, affordable healthcare plans within five years. While the bill isn’t perfect, it’s a start to supporting racial equity and health justice nationwide.

As church bells rang in Louisiana and across the country in celebration of the Supreme Court’s anti-abortion ruling, bells should have also rang in support of universal healthcare that would better protect Black women in poverty, and all those who will suffer the consequences of Roe’s demise and the resulting abortion bans.