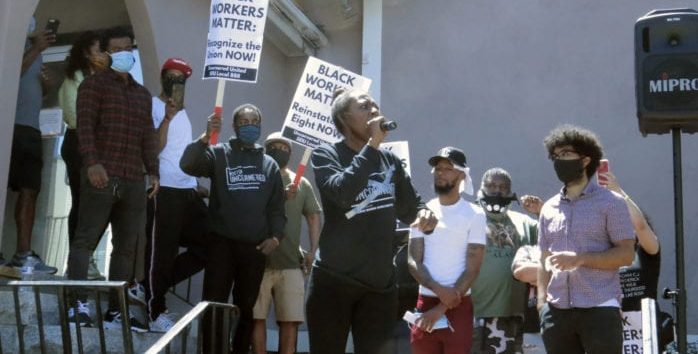 Above photo: Sharell Jacobs, whose layoff in January was one of the incidents that led staff to start organizing, shouts into the microphone, “How dare you collect money from the Patriots and then the next day get rid of your staff? We built this program!” Jane Regan from DigBoston.

A June 16 action for eight laid-off workers — organized just four days after the announcement they had been fired — drew about 100 people. They were protesting at their place of work, College Bound Dorchester/Boston Uncornered, on a quiet residential street on Tuesday morning.

With these latest layoffs, CEO Mark Culliton targeted one-third of the remaining youth services employees working for his company, College Bound, after workers declared their intention to unionize as Uncornered United-Service Employees (SEIU) Local 888 on June 2. College Bound is a “further education” preparation program, while Boston Uncornered hires neighborhood leaders impacted by violence to be mentors in the program. The company website advertises the programs as “opportunities to turn away from the ‘street corners’ for good.”

The UU mentors are Black and Brown neighborhood leaders who have demonstrated social influence and skill at developing young people by drawing on their own challenges and experiences. These workers are demanding that Culliton recognize the union and that he reinstate those illegally fired in retaliation for organizing. Uncornered United’s Facebook page asks supporters to sign and share a petition and contact Culliton supporting their demands.

As workers spoke out at the June 16 rally, they described a quintessentially capitalist story of structural racism and gentrification. Technology instructor Joe Taché explained that Culliton reduced his company from 94 workers to fewer than 25 in a decade: “At the same time, in 2010, Culliton’s salary was $140,000 and now it’s $185,000 … a raise of $45,000. That’s more than any of us make in a year!” Taché noted that in 2020 Culliton probably made even more.

Another worker pointed out that big banks and corporations oppress workers — and so do nonprofit entrepreneurs. Workers detailed how Culliton exploits and disrespects them, maximizing donations by publicly narrating selected painful details from their personal stories without consent, then excluding them from decision making.

Culliton, a white graduate of the University of Michigan with a Yale MBA,  calls himself “the vision behind the solution,” highlighting his school-privatization credentials on the company website. His biography suggests Black and Brown trauma is a profitable problem for him.

Meanwhile, the company’s advisors, instructors and mentors, on call 24/7 for their youth clients, earn between $30,000 and $40,000 — an unlivable wage in the hyper-expensive Boston area.

Just three days before the layoffs, Culliton raised $650,000, evidence that his motivation in the firings was retaliation, not response to the recession. He had certainly removed workplace activists in the past.

At the close of the rally, workers marched to Culliton’s fancy house — presumably valued above a million dollars in a rapidly gentrifying neighborhood where once multiple working-class families were crammed into triple-decker housing.

Protesters blocked midday traffic, chanted and leafletted essential workers of color in the streets, receiving a friendly reception. As they attached flyers to Culliton’s door, workers loudly appealed to his neighbors — home because of the pandemic — to help Culliton see the light. They also announced that they encourage people anywhere in the world to give him a call and support the workers’ struggle.