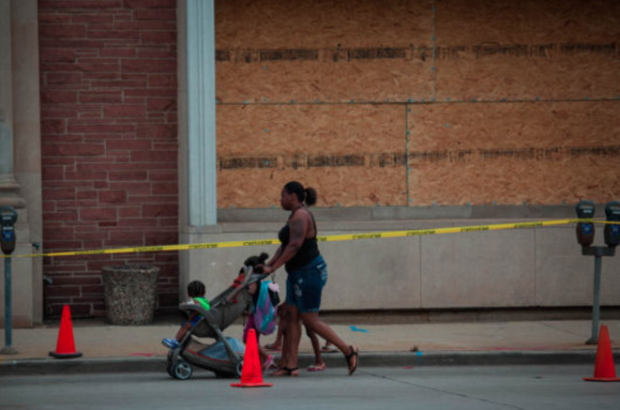 Black Youth, Single Mothers Are Not Responsible For Systemic Failings

Above Photo: Single mothers are not to be blamed for young people’s responses to a city that ignores or criminalizes them. They should not be shamed for having children, their family structure, or for public policy that has made the city unsafe for parenting.

This piece is published in collaboration with Echoing Ida, a Forward Together project.

Milwaukee Officials: —You Are Responsible

On the day 23-year-old Sylville Smith was killed by a Milwaukee police officer, the city’s mayor, Tom Barrett, pleaded publicly with parents to tell their children to come home and leave protests erupting in the city.

Barrett’s statement suggests that parents are not on the side of their sons and daughters. That parents, too, are not tired of the inequality they experience and witness in Milwaukee, and that youth are not capable of having their own political ideologies or moving their values into action.

It also suggests how much work Milwaukee’s elected officials and law enforcement need to do before they open their mouths.

Barrett’s comments came after Smith fled a traffic stop and was shot by authorities on Milwaukee’s northwest side. The young Black man’s death sparked an urban uprising in the Sherman Park neighborhood, an area known for its racial and religious diversity. Businesses were burnt down, and the National Guard was activated in a city plagued by racism and poverty.

But Milwaukee parents and families need more than a directive thinly disguised as a plea. And Mayor Barrett, who was re-elected to a fourth term in April, should know well that Milwaukee, the nation’s most racially stratified city, needs racial equity in order for there to be peace and prosperity.

I live in Milwaukee, so I know that its residents, especially its Black parents, do love their children. We want more for them than city-enforced curfews and a simplistic solution of returning to their homes as a way to restore calm. We will have calm when we have greater investment in the public school system and youth services; easy access to healthy food; and green spaces, parks, and neighborhoods that are free from police harassment.

In fact, according to staggering statistics about Milwaukee and Wisconsin as a whole, Black people have been consistently denied their basic human rights and health. Wisconsin has the highest rate of incarceration of Black men nationwide; the Annie E. Casey Foundation has found it is the worst state for racial disparities affecting Black children; and infant mortality rates are highest among Black women in the state.

What we absolutely don’t need are public officials whitewashing the facts: that Milwaukee’s young people have much to protest, including Wisconsin’s suspending Black high-school students more than any other state in the country.

Nor do we need incendiary comments like those coming from Milwaukee County Sheriff David Clarke, who drew national attention for his “blue lives matter” speech at the Republican National Convention and who is a regular guest on CNN and Fox News. In an August 15 op-ed published by the Hill, Clarke has called the civil unrest “the rule of the jungle,” “tribalism,” and a byproduct of “bullies on the left.”

He went even further, citing “father-absent homes” as a source of what he calls “urban pathologies”—leaning on old tropes used to stigmatize Black women, families, and the poor.

Single mothers are not to be blamed for young people’s responses to a city that ignores or criminalizes them. They should not be shamed for having children, their family structure, or for public policy that has made the city unsafe for parenting.

Creating justice—including reproductive justice—in Milwaukee will take much more than parents texting their teens to come home. The National Guard must leave immediately. Our leaders must identify anti-Black racism as a root cause of the uprisings. And, lastly, creating justice must start with an end to harmful rhetoric from officials who lead the way in ignoring and dehumanizing Milwaukee residents.

Sheriff Clarke has continued his outrageous comments. In another interview, he added he wouldn’t “be satisfied until these creeps crawl back into their holes so that the good law-abiding people that live in the Milwaukee ghetto can return to at least a calm quality of life.”

Many of Milwaukee’s Black families have never experienced calm. They have not experienced a city that centers their needs and voices. Black youth fed up with their treatment are not creeps.

And what hole do you think they should crawl back into? The hole where they face unemployment, underemployment, police brutality, and racism—and face it without complaint? If that’s the case, you may never be satisfied again, Sheriff.

Our leaders shouldn’t be content with Milwaukee’s status quo. And asking the citizens you serve to be quiet in the ghetto is an insidious expectation.