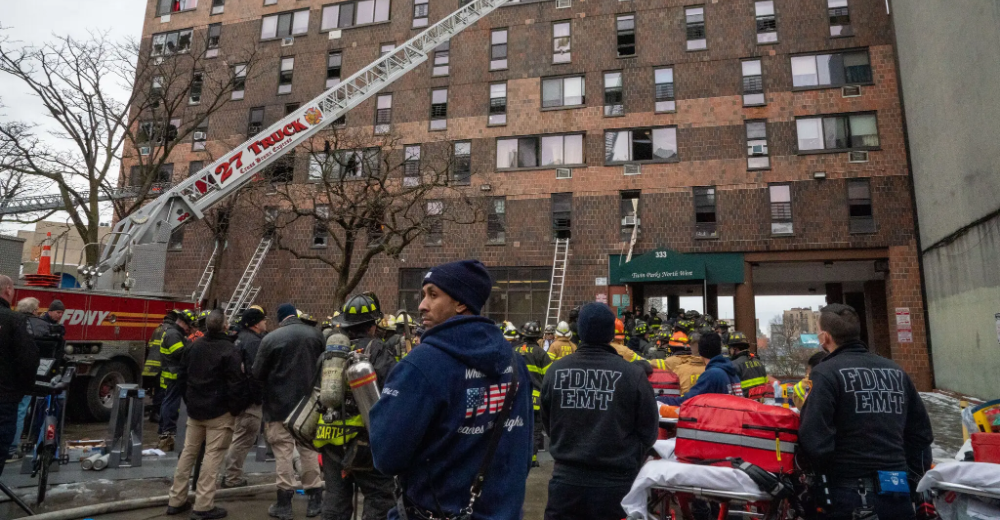 Was it the space heater on the third floor? The open door on the 15th floor? The faulty fire alarms that went off frequently? The nonexistent sprinkler system? Colonel Mustard with the candlestick in the library?

As local and national corporate media covered the devastating fire in the Bronx that killed 17 people on January 9, two culprits were somehow never on the list of what and who was responsible: the landlord and the city’s Housing, Preservation and Development (HPD) department, which is responsible for making sure landlords comply with housing codes. Always under suspicion were the tenants themselves, who were implicitly blamed throughout the coverage.

“A Space Heater Is Blamed for the Deadly Fire in a Bronx Apartment Building,” said a New York Times headline (1/9/22). It was one of dozens of similar headlines that prominently mentioned the “malfunctioning space heater” as the cause of the fire. Why a space heater was needed in the first place was not a question that was ever asked. Like the Times piece, several articles went out of their way to indicate that the heat was working in the building, or was probably working. “The Commissioner said he believed the heat was working in the building and that the heater was being used to supplement the heat.” “Supplement the heat” sounds nice, kind of like a throw pillow that might add an accent to your couch. The reality that it was too cold is never admitted.

The New York Daily News (1/11/22) was one of several outlets that followed up by reporting that the apartment where the fire started “had several space heaters running at the time of the fire—and all of them, including the one that sparked the fatal blaze, had been left on for days.” In case you missed the not-too-subtle blame-the-victim vibe here, the article goes on to cite building tenants who “wondered why the resident in the fire apartment had so many space heaters,” and who said their apartments were plenty warm. It also includes data on how many fires are caused by space heaters locally and nationally.

Oh, incidentally, it mentions that an anonymous tip on the day after Thanksgiving said that the entire building had no heat, “but the situation was quickly corrected and the complaint was closed,” so let’s carry on with our head scratching about the space heaters.

Back at the New York Times, an article on January 10 reminded us, “space heaters, particularly older models, are a well-known risk.” It didn’t need to add that the tenants really should have known better. The piece went on to admit that space heaters are “a fixture in many units during cold snaps,” but pointed out again that that’s only “to supplement built-in radiators.”

It then revealed that a city survey found that “low-income neighborhoods in the Bronx, Brooklyn and northern Manhattan that are historically home to communities of color have a higher percentage of residences that rely on supplemental heating sources.” It might have added that being a person of color is a well-known risk, but it didn’t. Nor did this survey warrant any commentary or analysis.

In case you missed the message, the Times (1/10/22) went on to devote an entire piece to the dangers of space heaters, including lots of details about their parts, and reminding us that “the problem is that many people still rely on outdated heaters with minimal safety features, or they do not know how to use heaters safely.” There is zippo, nada, bubkes indication that people should not need to rely on “supplemental” heat.

As it became clear that all 17 victims died of smoke inhalation, initial coverage blaming the space heater and the tenants who needed it shifted to reporting about building doors that were not closed, creating the deadly smoke conditions. But as with the space heater, there was no meaningful interrogation of whose fault the open doors were, though there was plenty of innuendo that it was the tenants’ fault.

In “Two Open Doors Created ‘Flue Effect’ of Deadly Smoke at Bronx High-Rise,” the New York Times (1/10/22) said Mayor Eric Adams “vowed to ‘double down’ on a decades-old campaign by the city to raise awareness about the importance of closing doors during a fire.” It goes on to say that when the residents in the unit where the fire started fled, “crucially…they did not shut the door to the hallway behind them.” As an afterthought, it mentions that the door is supposed to be—by law—self-closing, but “it did not function properly.” Once again, the less-than-subtle message is that the tenants themselves are responsible for the deadly fire.

In the 33rd paragraph of this 39-paragraph story, we learned that the building has been repeatedly cited by HPD for violations related to the self-closing safety functions of its doors. But lest we be tempted to shift the blame for the fire, the Times tenderly introduced the subject by saying the problems “do not appear” to be “an entirely new issue.” By contrast, the article was firm in its affirmation that all the violations “had been resolved.”

And just as it had devoted a piece to the importance of space heater safety, the Times  (1/11/22) followed up here with a piece on the importance of closing doors during a fire. After condescendingly explaining how fire requires oxygen, the article returned to the apartment door: “City officials have not yet said precisely why the apartment door failed to close.” It went on to discuss springs and pistons, dirty or worn-out parts, even the angle at which the door might have been opened. But it never asked the question behind the question: Is it the slumlord who owns the building that is responsible for the failure?

As bad as the New York Times coverage of the doors was, the Washington Post was worse. In “Officials Blame Space Heater for Bronx Fire, Say Smoke May Have Spread Because of Open Door,” the Post  (1/10/22) managed to blame both the space heater and the open doors, but never mentioned any of the building’s safety violations. It prominently quotes the NYC Fire Commissioner saying, “If you’re in a building, an apartment building that has self-closing doors, make sure it works, and if it doesn’t, please point that out.” Once again, we’re led not-so-subtly to blame the tenants who in this case of course did “point out” non-working doors, as we know from the multiple violations—but the reader doesn’t know that.

It gets worse. In a piece the next day (“Faulty Safety Doors at Bronx High-Rise Were Repeatedly Flagged Before Deadly Fire, Officials Say,” 1/11/22), the Washington Post included information about the door safety violations, though a cynic might wonder why this information couldn’t be included in the previous piece. The piece, like all the others that mentioned the violations, confidently asserted that they had all been resolved.

The facts on the ground, however, are that there were multiple doors in the building that did not work properly. So the Post threw in this random speculative accusation: “It remains unclear whether the doors failed mechanically or if they were manually disabled.” There’s absolutely no evidence cited for the possibility that the doors were manually disabled.

Violations But No Violators

Some outlets, notably the New York Post (1/9/22, 1/10/22), reported early on the building safety violations, though the big national outlets lagged in covering them. But even the best of this coverage fell far short of framing the problems as systemic, and the idea that it is the landlords’ fault is nowhere to be found in the corporate coverage.

“I will also use the law both as a sword and as a shield to get to the bottom of this fire,” New York State Attorney General Letitia James said at a vigil on Tuesday night:

This quote appeared in a very short New York Post piece (1/11/22) on the vigil, and it was, as far as I can tell, the only quote by any government official cited in the corporate press that placed any blame on the failures of government oversight, or indicted ongoing housing injustice in NYC’s poor neighborhoods.

It stood in sharp contrast to Mayor Eric Adams, whose early comments were in the blame-the-victim genre, and whose relationship to the landlords (the principal of one of the developers that owns the building, Rick Gropper of the Camber Property Group, was a donor to Adams’s campaign, and served on his transition team for housing) was regularly mentioned in the press but rarely analyzed.

In its first piece on the fire, the Washington Post (1/9/22) wrote, “Saidatu Hammed, a resident of the 12th floor, expressed frustration with building management and said the smoke made it difficult to breathe as she and her family ran down floor after floor.”  You might think that it would go on to detail what Hammed’s frustrations with management were, but you’d be wrong. The article never returned to that. It never mentioned any of the safety violations. It did intone, “The Bronx apartment blaze is a tragic example of the dangers of smoke inhalation.”

You’d be forgiven if you thought this coverage was designed to steer readers away from thinking about the dangers of for-profit housing, or the vice grip that real estate developers have had on New York City since they “bought” Manhattan from the Lenape in 1626.