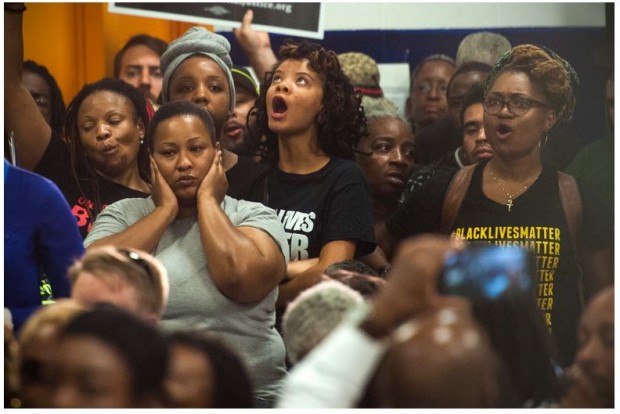 Note a coalition of Black Lives Matter groups in Washington, DC  interrupted the speech of Mayor Muriel Bowser announcing the police escalation on August 27, 2015. Among the groups were Stop Police Terror Project, Black Lives Matter DMV and BYP 100. They advocate for rebuilding communities not for adding more police and giving them greater powers to search people in DC.

Stop Police Terror Project Asks:  Do we continue with the police-state approach or do we start to rebuilding communities?

Mayor Muriel Bowser has released her plan addressing the spike in crime. Stop Police Terror Project and many others, have stated, she is headed in the wrong direction. In her framing she states the plan is “comprehensive.” Translated from politician-speak that means it contains “something for everyone.”

Stop Police Terror has some serious concerns particularly about the massive increase in police presence and expansion of police powers. Much of what Bowser proposes is based on spurious information.

Tougher penalties for crimes on public transit is a strategy that simply will not work. One of the principal studies on the effect of more severe penalties concluded: “the studies reviewed do not provide a basis for inferring that increasing the severity of sentences generally is capable of enhancing deterrent effects.” Stop Police Terror rejects this mass incarceration approach to criminal justice that has been proven by the academic and anecdotal evidence to be unsound.

Further, the Mayor has sought a massive expansion of police powers to detain and arrest those on probation or parole. They claim they will focus only on “violent criminals.” This raises two questions, first: where is the evidence that this population of people is uniquely responsible for said murders? Secondly, why, if it is just “a few”, do we need blanket legal changes that criminalize and target wide swaths of Returning Citizens trying to rebuild their lives?

Further, when data concerning the decriminalization of Marijuana and MPD’s own public statements clearly show that racially-biased policing is a problem, what evidence exists to inspire trust that these expanded police powers will not be abused?

At the root of the differences between critics from the broader Black Lives Matter Movement and the Mayor, however, is philosophical. Bowser does not truly understand the thrust of Stop Police Terror’s critique. Quite simply, Stop Police Terror’s view is that policing is a band-aid approach to the fallout from the serious social problems created by the poverty and devastation in the “hardest hit” communities in Washington D.C. Large police surges may make some feel safe, but in the most impacted communities it drives a wedge between those who do, and those who see the criminal justice system as criminalizing the social existence of themselves and their friends.

This country has spent 30 years approaching “crime” through massive numbers of cops and draconian penalties that have had a devastating effect on Black and Brown neighborhoods, both on their own and as multiplier effects to problems like unemployment.

Mayor Bowser and Chief Lanier support this method. They’re approaching this from a police-state point of view; more cops, more surveillance, tougher laws to “suppress” crime. We are approaching it from the perspective of healing the “hardest hit” communities, by dealing directly with the root causes.

Stop Police Terror’s approach is vastly different. We recognize there is no real short term solution. We want to see a surge not of police but of community. The Mayor claims to also recognize root causes, but fails to address them adequately. Producing 1,000 units of “affordable” housing when the need is tens of thousands, while facilitating displacement in several public housing projects, for instance, reflects that inadequacy.

We specifically want an approach to murders that places at the forefront drastically expanded support for community-led peacekeeping and mediation programs. And a surge in resources to mental health and housing. As well as stronger enforcement of First Laws, strengthening of Ban the Box and other laws that fight discrimination against Returning Citizens.

The essential question in front of us is, do we continue with the police-state approach or do we start to rebuilding communities wracked by years of disinvestment and a draconian criminal justice system? This is not a “both/and” situation it truly is an “either/or”. The officials of the District of Columbia have to decide if they want to pay more than lip service to the needs of the “hardest-hit” communities.