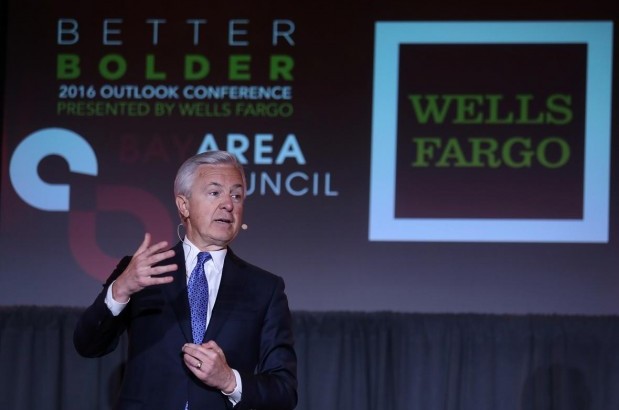 Blogging Our Grand Divide No Tears For Wells Fargo CEO

The Wall Street banker should forfeit all compensation inflated by fraud.

After being raked over the coals for one of the biggest scams in Wall Street history, Wells Fargo CEO John Stumpf has agreed to forfeit $41 million in compensation.

Astoundingly, this is the first time a Wall Street banker has had to disgorge any of his ill-gotten pay.

But don’t get out the Kleenex box quite yet. In the past three years, Stumpf pocketed nearly $200 million in compensation. And of this, $165 million was in stock-based pay that was artificially inflated by illegal conduct.

Over the past three years, Stumpf has pocketed $165 million in stock-based pay that was inflated by illegal conduct.

Since at least 2011, Wells Fargo employees who were under extreme pressure to meet sales quotas created accounts without customers’ consent, making these customers vulnerable to overdraft and other fees. A new Public Citizen report suggests this behavior might’ve started even earlier, since Wells Fargo’s push to boost the number of accounts per customer, called “cross-selling,” began as early as the late 1990s.

After a federal agency exposed the scam this past August, Wells Fargo fired 5,300 lower-level employees while leaving Stumpf and other top brass unscathed.

Senator Elizabeth Warren (D-Mass.) pointed out in a blistering attack during a September 20 hearing that Stumpf regularly touted the bank’s aggressive sales practices in earnings calls with shareholders. Stumpf’s rosy but completely false reports of increased accounts per customer boosted the Wells Fargo stock price, which increased by about $30 per share over the past four years.

This, in turn, inflated the value of Stumpf’s stock-based pay. Just over the past three years, he pocketed $165 million in stock options and stock grants – all of it artificially bloated by the scam.

What’s even more outrageous is that most of this scam-inflated stock-based pay was subsidized by taxpayers. Under a loophole in the tax code, companies can deduct unlimited amounts of executive pay from their federal income taxes, as long as it is so-called “performance-based” pay. As we documented in our annual Institute for Policy Studies “Executive Excess” report, $154 million of Stumpf’s pay qualified for this write-off between 2012 and 2015.

The $41 million Stumpf has agreed to forfeit in the wake of the scam revelations is unvested stock – in other words, it was granted over the past several years but has not yet come into the CEO’s possession. And by the time of the stock’s original vesting date, who knows how much the bank’s stock will be worth.

Wells Fargo stock dropped six points between September 1 and September 29. And we may be seeing only the beginnings of the scandal’s repercussions for the bank’s bottom line. The California state government has just announced it will cut off business relations with Wells Fargo for at least a year because of its fraudulent activities. Specifically, the bank will no longer handle the lucrative business of underwriting California’s state debt and handling the state government’s banking transactions.

New York Mayor Bill De Blasio has also threatened to cut off that city’s business with the bank and withdraw investments from the firm unless top executives are held accountable.

In a House Financial Services Committee hearing today, Stumpf tried to tamp down public outrage by promising a full investigation into the scam and eliminating sales quotas. But we already know the illegal behavior inflated the bank’s stock price. And Stumpf, who is ultimately responsible, benefited immensely from this crime.

Senator Warren is right in demanding that Stumpf resign and be prosecuted. And at a minimum, he should also give back all bonus and stock-based pay that was pumped up by crime. Over the past four years, Stump also enjoyed an annual salary of $4 million. That should be plenty to cover the cost of the high-priced legal counsel he’ll no doubt be enlisting to help get him out of this mess.