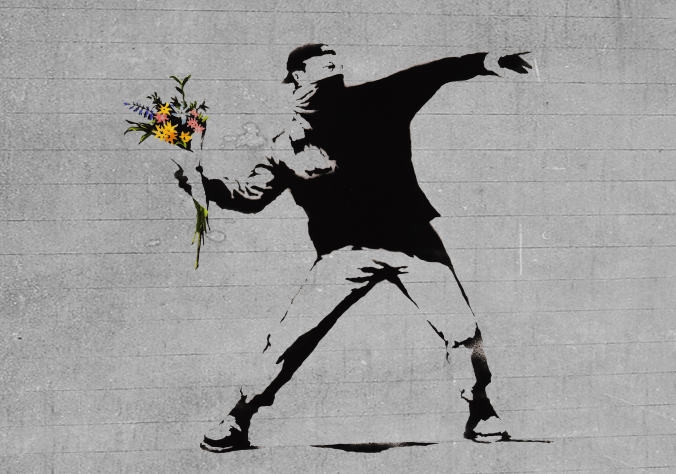 Mayor Michael Bloomberg who has aggressively and often illegally used the New York Police Department (often at great expense in fines and court orders) to attack protesters and to racially profile tens of thousands of New Yorkers is now threatening street artist Banksy with arrest.

The artist is in the midst of “Better Out Than In,” which he calls “an artists residency on the street of New York.” While many New Yorkers seem to be enjoying his art — flocking to search for it when he posts a photo and gives clues as to where it is located, Mayor Bloomberg promises to remove any art that is on public property.

By backing the use of the NYPD to arrest Banksy for ‘vandalism’ it is very likely he has heightened the interest in Banksy’s artist’s residency in New York.  I know we were enjoying watching Banksy from afar (in Baltimore) and now will be watching even more closely.

The outgoing mayor has put himself in a lose-lose situation: if he fails to arrest Banksy his reputation as a Robin Hood of the art world grows; and if he arrests him NY prosecutors will be put in the position of prosecuting a very popular artist for vandalism, when his art has sold for tens of thousands of dollars.  Vandalism does not usually increase the value of property.  As activists we often seek to create situations where the power structure is placed in a lose-lose dichotomy, Bloomberg has done it to himself.

Below the article describing Bloomberg’s attack on street art is a photo display of some of Banksy’s more iconic pieces of art.

Banksy has been accused of defacing New York and ruining its residents’ property by Mayor Michael Bloomberg.

While delighting the city’s lovers of street art by painting a new work in a surprise location every day this month, the elusive British graffiti artist has incurred the wrath of New York’s fiery chief executive.

The tough-on-crime Mr Bloomberg said during a press conference in Manhattan that graffiti “does ruin people’s property” and is a “sign of decay and lost control.”

“Nobody’s a bigger supporter of the arts than I am,” said the billionaire mayor, who donates millions from his personal fortune each year to the city’s artistic institutions. “I just think there are some places for art and some places where – no art”.

“You running up to somebody’s property or public property and defacing it is not my definition of art,” he said. “Or it may be art, but it should not be permitted. And I think that’s exactly what the law says.”

His remarks echoed a decade-long debate in Britain over what should be done about murals painted on the streets of London by the artist, whose works now sell for hundreds of thousands of pounds.

The mayor said any Banksy work discovered on city property would be swiftly removed. However, he declined to be drawn on whether the New York police department should go after the artist.

Earlier this week The New York Post, the city’s leading tabloid newspaper, claimed under the front page headline “Get Banksy” that police were actively pursuing him to put a stop to the graffiti.

Amid denials from police spokesmen that he was a priority, Banksy said in a message on his website: “I don’t read what I believe in the papers”, and continued his “residency on the streets of New York”.

The project, titled “Better Out Than In”, has on most days this month seen the artist leave new works on walls and doors around the city. He then posts a photograph and an approximate location for the new piece on his website, prompting frantic treasure hunts by his fans around the named areas.

However on day 13 of the residency he set up an unmarked stall in Central Park and sold signed original small canvases, which would typically fetch tens of thousands, for just $60 (£38) each.

The stall, which was open all day, attracted just three customers – including one man visiting from Chicago who bought four paintings for the walls of his new house, and collected a small gold mine.

A fight broke out on the streets of Williamsburg, Brooklyn, on Thursday evening when a hooded man attempted to spray over the artist’s latest work – two geishas crossing a bridge – with black paint.

José Goya, the manager of the building on which the work appeared, pushed the man to the ground to protect it – but only after he had defaced it.

Fans later arrived with cleaning material to restore it.

Several more of the paintings have been quickly defaced by rival graffiti artists, while one was covered with a cardboard box by enterprising local youngsters, who then charged passersby $5 (£3) to view it.

Another was swiftly fenced off by the owner of the building on whose door Banksy had spray-painted. It is believed the owner is now attempting to sell the work.

Below are some of the most iconic of Banksy’s art.  There are so many it is impossible to show the breadth of his work.  For this site we picked some of his more overtly political pieces.  To see Banksy’s current New York street exhibit visit: “Better Out Than In.”