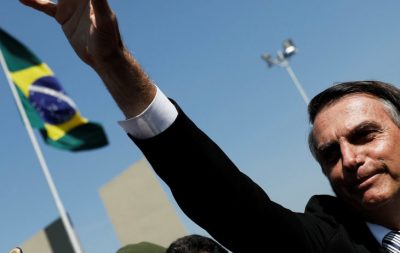 On 28 October 2018, Jair Bolsonaro was elected President of Brazil with 55.1% of the vote – and with a gigantic help from Cambridge Analytica.

At the World Economic Forum (WEF) in January 2019 in Davos Switzerland, Bolsonaro made a sumptuous presentation, “We Are Building a New Brazil”. He outlined a program that put literally Brazil up for sale, and especially the Brazilian part of Amazonia. He was talking particularly about Brazil’s water resources, the world’s largest, and the rain forest – offering a huge potential for agricultural development and mining.

None of the world leaders present at the WEF, precisely those that regularly meet pretending to save the planet, reacted to Bolsonaro’s statement on the Amazon region. They all new who Bolsonaro was and is – they knew that the man had no scruples and would destroy – literally – the world’s lungs. They did nothing. They stayed silent in words and deeds, applauding the neonazi for his openness to international business and globalization.

Today, on the occasion of another similar world event, the meeting of the G7 in Biarritz, France, French President Macron accused Bolsonaro of lying when he talked and pledged environmental consciousness after taking office, about protecting the Amazon area. Macron was joined by Germany in threatening Brazil with canceling the trade agreement with Mercosur, if he would not immediately undertake to stop the “wildfires”. They have most likely nothing to do with ‘wild’ – as they according to all circumstantial evidence were planted in a concerted effort to rid the rich Amazon territory of the life-sustaining jungle, so as to make the newly gained flame-deforested land accessible for private agri-business and mining.

Mind you, the G7 is another self-appointed totally illegal group of industrialized, rich countries (similar to the G20); illegal, because they have been approved by nobody, not by the UN or any international body. They became rich mostly on the back of poor developing nations that were and are still colonized for hundreds of years. The G7 count today about 10% of the world population and are controlling 40% of the globe’s GDP.

Despite the fact that nobody, other than themselves ratified their existence and their machinations, they believe they can call the shots of how the world should turn and function. They have no official backing by anybody, especially not the people across the globe, who, with a vast majority are fighting globalization. It’s a useless structure – RT refers to them as “The Unbearable Pointlessness of G7” – but their power lays in the rest of the world’s silence – their silent acceptance of the G7’s arrogant wielding of the scepter of power.

So, would Bolsonaro take them seriously, knowing that he is one of them and they are fully sharing his ideology of profit first, shoving environmental and social values down the muddy waters of the Amazon River? Hardly. He knows they are hypocrites. He knows that they make a bit of noise, because they have to. It makes for good public relation and propaganda – so people don’t go on the barricades. He knows that starting this coming Monday, 26 August, when the G7 summit will be history, that anything the Macrons of this world so impressively said, will fade away. The media will concentrate on other ‘news’ – and the forest fires will burn the life stream of Amazonia away – to make room for corporate profit making by the elite few.

Never mind the Constitutional protection of indigenous people and their land, Bolsonaro backed by evangelists and his military junta will rapidly dismantle any remaining protection for the ecosystem and native communities. His argument goes that the native people’s land is sitting on huge reserves of natural resources that belong to Brazil and may be concessioned to private corporations for mining, exploitation of agriculture and lumber.

The indigenous folks are people who have for thousands of years made a peaceful living in the Amazon. They are the gatekeepers of Amazonia; they are the people who may carry our genes from the present killer civilization to the next, hopefully less of a killer one, when mankind has finally managed to destroy itself. It will not destroy the planet. Never. The planet will just get rid of the nefarious elements of annihilation – mankind – and renew itself. As has happened many times in the past – a new civilization will eventually be born – and, yes, the world’s indigenous people, the likely only survivors, may carry on our DNA, possibly to the next attempt at humanity.

The fires have so far in about 20 days since they were discovered, consumed at least 74,000 ha of tropical rain forest. The smoke is already trespassing the border to Argentina and affecting the provinces of Formosa, Jujuy, Corrientes, Catamarca, La Rioja, Santa Fe and may have already reached Buenos Aires. NASA reports that about 3.2 million square kilometers of South America are covered by smoke.

The flames are massive and are devastating the jungle at a rapid pace. Amazonia comprises one of the world’s largest rainforests, also known as Mother Earth’s lungs – without which humanity – and fauna and flora might not survive.

According to the Brazilian National Institute for Space Research (INPE), the fires increased by 83% – almost double – from what they were last year, and, not coincidentally, at least 68% of protected areas have been affected. The Brazilian Space Research spotted 72,000 fires, of which 9,000 last week alone. The Amazon is home to 34 million people, including over 350 indigenous groups.

At the onset of the G7 conference, Mr. Macron tweeted:

“Our house is burning. Literally. The Amazon rain forest – the lungs which produces 20% of our planet’s oxygen – is on fire. It is an international crisis. Members of the G7 Summit, let’s discuss this emergency first order in two days!”

Our house is burning. Literally. The Amazon rain forest – the lungs which produces 20% of our planet’s oxygen – is on fire. It is an international crisis. Members of the G7 Summit, let’s discuss this emergency first order in two days! #ActForTheAmazon pic.twitter.com/dogOJj9big

The destruction of the Amazon is indeed a crime of first degree. Accordingly, there are protests around the world against Bolsonaro’s “free for all” mining, lumbering, land and water grabbing policies. The eco-warriors Extinction Rebellion (XR) organize widespread protests, and in front of London’s Brazilian Embassy protesters chanted, “Hey hey, ho ho, Bolsonaro’s got to go!”.

While the Brazil fires catch world attention, there are jungle fires even larger than those in Amazonia burning down other parts of the world’s oxygen-generating lungs. Bloomberg cites NASA data, according to which last Thursday and Friday, 22 an 23 August – in two days alone – more than 6,900 fires were recorded in Angola and about 3,400 in the Democratic Republic of Congo (DRC), about 5 times as many as in the same two days in the Brazilian Amazon region. The destruction of the jungle in Africa progresses virtually unnoticed and is hardly reported in western media. Bloomberg is an exception. Whys is that?

Could it be that the same globalized corporations interested in Brazil’s natural resources underlaying the Amazon forests, are also interested in those enormous reserves of minerals and hydrocarbon resources of Central Africa? Have they – DRC, Angola and possibly others been encouraged tacitly or directly by Bolsonaro and his clan to let the jungle burn? There are plenty of Brazilian corporations which have a vivid interest in Angola, another former Portuguese colony.

Despite the G7 apparent concern to protect the world’s lungs in Amazonia, they seem to be oblivious about the Central African rain forest devastation. The massive African fires too advance rapidly and extinguish another part of the world’s lungs. But these fires are not on the G7 radar, or agenda for discussion, and nobody is threatened with sanctioning if the respective governments remain hapless onlookers.

In 2008, a so-called Amazon Fund, the first UN REDD+ initiative for the protection, preservation and monitoring of the Amazon region was created (UN REDD+ = reduce emissions from deforestation and forest degradation, and foster conservation, sustainable management of forests, and enhancement of forest carbon stocks).

Germany and Norway – and others – have accused Brazil for not having properly invested their contribution into the Fund. Norway has recently blocked a payment of US$ 30 million destined for the Fund. Germany had blocked already in early August the equivalent of US$ 39 million for different Amazon protection programs to be financed by the Fund. But Bolsonaro, in a nonchalant manner dismissed the blocked payments, suggesting that Germany should use the funds for reforestation of Germany.

In the case of Brazil, the threats by the Macron-Merkel duo – and others – seem to have had at least at the outset the effect that Bolsonaro is mobilizing the military to help extinguish the fires. Will he succeed? – Does he want to succeed? – In any case will the media continue reporting on progress once the G7 have gone home? – Will the world’s outcry be loud enough to force a concerted effort, possibly UN led – to fight and extinguish these fires that are menacing not only to destroy a key oxygen generator for life on mother earth, but also a UNESCO protected world heritage?