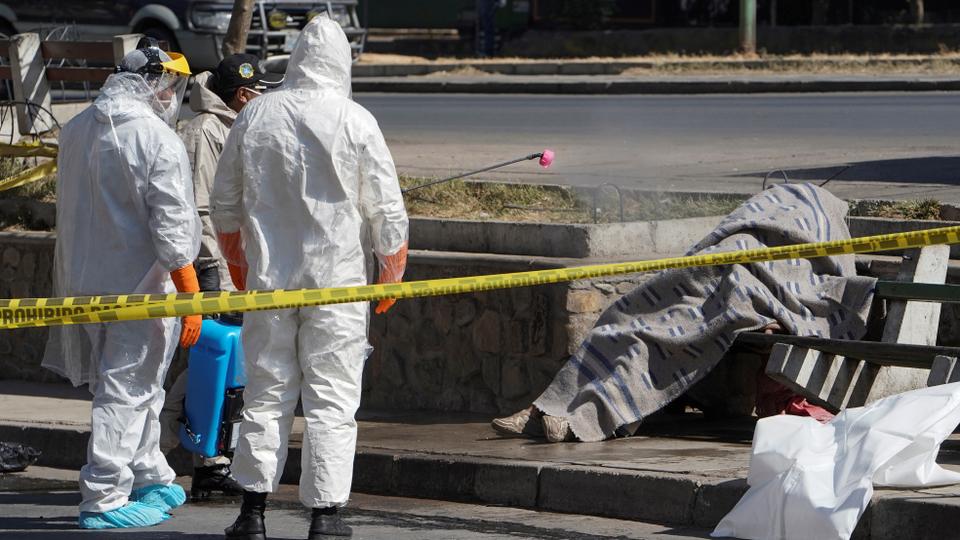 Above photo: Officials dressed in personal protective equipment, look at the covered body of a dead man, amid the outbreak of the coronavirus disease, in Cochabamba, Bolivia, July 6, 2020. Reuters.

Bolivia has surpassed the 61,000 person barrier of Covid-19 with more than 2,200 deaths in four distressing months of the pandemic. However, the official data only shows a small part of the reality, that which is used for inscrutable purposes. In the midst of this spiral of contagion that attacks the weakest social flanks, there is no national government where irreparable pain strikes. The governing body of society and institutions has disappeared from the scene, leaving more than 11 million human beings in orphanages who can only wonder about their uncertain and somber future.

The country has been left to its own devices. There is no one to take the reins of power to turn it into health prevention, avoid mass deaths and make decisions about national survival. Bolivia is living in the greatest drift in all its history, without a national government that assumes its social, economic and political responsibility, but what is worse, without a direction or a predictable destination in the short term. The medium and long term are macabre jokes in the midst of a regime that has made power its feast of blood and easy money. With an interim presidency that decided to move to the sidelines of the presidential candidacy, the interest in continuity prevails over the inevitable urgency of the health contingency.

The health ministry, absolutely lost and inept, with 3 ministers rotating through in the middle of the crisis and a semi-illiterate defense minister to replace the third minister who is recovering, only succeeds in showing cold, incomplete and lacking in credibility when it comes to statistics in which only cunning political calculation prevails. No friendly voice to explain what is happening in the country with the advance, stabilization, or retreat of the pandemic. Pure imposture, pure media paraphernalia that only drains money from the pockets of the powerful communication entrepreneurs to increase the volume of fear and guilt. In the midst of this desolate panorama, all that can be heard is the strident and mournful cry of the most sinister minister in history, threatening the four winds to impose the law that flows grotesquely from his guts intoxicated with hate and vengeance.

The media brings nothing but bad news or the echo of what the regime wants to be heard on channels, digital press or radio, tinged with chilling episodes before which simple morbidity trembles. The death of a person is broadcast live only to satisfy the appetite for the ratings the government demands for advertising. The media dives into a portentous sea of squalid information, infested with moral misery that fortunately more than 70% of the Bolivian population does not believe. However, that does not count when it comes to doing business with the truth. Everyone is in tune and with the same script of confusion to the point of alienation, lying to the point of satiety, obliterating reality to the point of numbness. Not only does it pay to silence or encircle the media, but also the manipulative and strident misery of those who have decided to turn death into a crude business.

After more than 120 days of health loss, no one knows of the existence of any National Pandemic Control Plan or of its results, but neither does the press ask about it because their complicit silence is worthwhile. It is only half-known that we are facing a National Health Emergency that has served for everything except guaranteeing the health and preservation of life of Bolivians. On the contrary, the emergency decree has catapulted the large and small businesses that have made the pandemic the pretext for the cruelest illicit enrichment in living memory. Purchases abroad for astronomical overpriced respirators that enter the country as resuscitators amidst dubious donations. Ministries that have nothing to do with the pandemic acquiring health supplies that never arrive or that are blocked in mid-flight to avoid the discovery of the infamy of the business. State-owned companies that serve as petty cash for large illegal barter while people die on the sidewalks. Ministers who sneer at themselves, lie unblushingly to naive people or spend their time in rude and morbid staging amidst atrocious drunkenness. Corruption is frightening from every angle and is the indicator of the greatest abjection of a regime turned over in a sea of unburied corpses. The health emergency operates like a sharp dagger in the throat of the Bolivian people.

The country is witnessing a Dantesque scenario where despair and stupor abound in a horizon of unspeakable pain and tragedy. In the midst of mourning and crying, the regime decided to capitulate in the face of the pandemic in exchange for continuing with the daily rites of national plundering. They left in the hands of regional and local governments a tragedy that overflowed them not because of the ineptitude of the health system but because of the excessive eagerness to steal everything in their path and to quickly repress any gesture of rebellion or censorship. They preferred to declare war on the seditious or the alleged terrorists who interrupt the felonious feast. No sign of the government’s existence in the face of human tragedy other than an electioneering message or sterile political campaign ads. No scientific report, no data on the regression of national, regional or local health capacities, no hint of the distribution of medicines or benign treatments for the people most in need. Nothing at all. Absolute silence and only frightening figures that throw more pain on a people stunned by so much government indolence and so much misery. Pharmacies speculating on aspirin, no quick tests, doctors or nurses without biosecurity equipment, hospitals saturated on the verge of despair.

The outlook is bleak by all accounts. Dozens of corpses in the streets, dead without being buried in their homes waiting for the arrival of some health service from the municipality, indigenous communities on the verge of disappearing under siege from the lethal disease, thousands of infected families in the peripheral neighborhoods waiting for their turn to die slowly and without a glimmer of medical assistance, Dozens of medical-military patrols in useless racks with no medicine on hand, hospitals overcrowded with sick people and terrified by fear, intensive care rooms without oxygen or respirators and private clinics turning tragedy into a perfect business.

We are in the hands of a sick and virulent caste that in less than 7 months has dynamited the country to bring it to the edge of the abyss. It privileged massacre and violent death, persecution and the sowing of scenarios of alleged sedition and terrorism. They invent tricks, lies without any scruples, vomits hate wherever they go and tries to put social organizations and the MAS against the ropes, supported by a miserable press that offends human dignity. The “pitiful republic” that was supposed to replace the Plurinational State was submerged in a sea of violence and silliness and only exhales demoralization and disenchantment. They believed that banishing the alleged dictatorship was tantamount to installing a chimerical democracy and were left with the facts. The November coup plotters watch in awe as their dream collapses into a multiform nightmare that bleeds everywhere. They are disconcerted and do not explain to themselves that the transition that was supposed to carry them on their shoulders to a new time, is transferring them mercilessly to the time of a new infamy. Even the Pharisees of the pitiful democracy who were blowing the four winds of change today are pallid about their gloomy future, complaining pitifully about the lack of democratic mysticism, commitment or pitiful militancy. It is pitiful for those who believed that the republic of the white faces was returning.

The polls do not match their sublime desires to perpetuate themselves in power. The numbers are out of tune with the reality they invented and show with savage ferocity that killing is not always beneficial to criminal minds. Killing kills, some philosopher of the Creole tragedy would say. There is an unrestrained desire to unleash the people’s anger at such indecency and humiliation. Postponing elections is the new formula that presides over the uneasiness of an abject right-wing that worships atavistic fear. Outlawing MAS is another option and the last one, a new coup d’état with the support of the police and armed forces vilified to the core. The aim is the same: to prevent the return of the rebellious Indians and their multinational voraciousness that bet on equality among equals to defeat the inequality of color and the myth of the supremacy of money or the superiority of social class.

To close the bracket, the transitional president has decided to promote the military by decree in an act of sterile arrogance with the sole aim of adding generals where there is a divided army. There is no doubt that in any battle to come, the first victims of this de-institutionalized hell of the State will be the military and police themselves, facing their old grudges in an absurd and recurring duel. In the meantime, the country will continue to bleed from the wounds of the misery that is beginning to creep into the streets with people who have only reduced their dignity to a request for a Christian burial.

In a desperate attempt to politically encircle the Plurinational Legislative Assembly and shift responsibility for her wrongful death, Jeanine Añez has promised a bonus of 500 bolivianos in exchange for approval of credits to mortgage the country to the International Monetary Fund (IMF) in its last death spell. As a prelude to her failure in everything, Añez still believes that placing a gun to the head of the Supreme Electoral Tribunal to outlaw MAS for an alleged violation of the Electoral Law will allow her to survive the final simulation. Her days are numbered and the tide of underground anger strained by collective tragedy and loneliness begins to rise.

The regime is on its way to join the shadows of the corpses that are buried at night so that the daylight does not give them away. Fleeing is their only home medicine and before they do so they have the task of continuing to impregnate the country with hate and larceny.