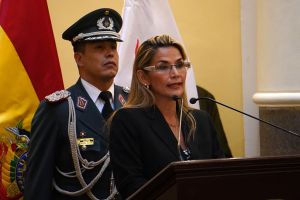 Bolivia: The Coup Behind The Coup

I am not a nobody! I am craftsman, damn it!

That desperate cry of Pedro Quisbert Mamani’s father, the factory worker murdered by government repression during the Senkata massacre, summarizes Bolivia’s process of change that is not understood yet by the coup mongers. If Evo Morales and the Movement towards Socialism (MAS) did anything at all, even beyond nationalizing the country’s natural resources or convening a Constituent Assembly, was giving dignity back to the wretched of the earth, the nobodies, the popular classes in a Bolivia turned into a Pluri-National State.

In the meantime, as former vice-president Alvaro Garcia Linera said, racial hatred prevails in the traditional middle class’ political language. Hatred of the Indian. It has been confirmed that Evo Morales always represented the realization of dreams and the collective imagination of the social majorities. This is why the hatred focused against him is the same as hating a whole nation. What’s more, hatred has united this middle class and that is why they allow public forces to commit murders and justify a mad government in which a misogynistic man and female batterer is heading a witch hunt against MAS members.

On the contrary, popular movements are fragmented by default. But their power relies on that weakness. So, people’s insurrection against the coup d’etat, the same as in 2003 in El Alto, is made of a series of regional micro-leaderships that cannot be controlled by Evo Morales himself, and certainly not by the putschist Government.

Regional mobilizations are first of all demanding self-proclaimed president Jeanine Añez to resign; identifying the masterminds and perpetrators of the coup d’état and subsequent massacres in Sacaba or Senkata; and reestablishing democracy and the rule of law in Bolivia.

Among all of their demands, knowing who are the coup d’état masterminds is perhaps the most important aspect to understand what has happened in Bolivia.

It’s not Jeanine Añez for sure. She is a disposable puppet just as Michel Temer was in Brazil. Carlos Mesa either. He never had any leadership role during the days following the October 20 presidential elections and he can’t even claim to own the 36 percent of his votes because he knows he just gained the anti-Evo vote by default not conviction, and this does not mean that they endorse his project. And regardless of his media repercussion, the main actor of this coup is not Luis Fernando Macho Camacho either, who played exactly the role of a bull charging and becoming the center of attention so that others could move in unnoticed. Not even Vladimir Yuri Calderon or Williams Kaliman, commanders-in-chief of the Police and Armed Forces, respectively, who triggered the civic, political, police and military coup, can claim the major responsibility.

The coup d’état has been flawlessly staged and the above mentioned opposition leaders, police and military officers, think that they were in fact responsible for forcing Evo Morales to seek asylum. But the truth is that responsibilities go beyond Bolivia and points directly at the United States.

It’s commonly known that Yuri Calderon served as Military Attaché at Bolivia’s embassy in Washington until December 2018, while Kaliman did the same between 2013 and 2016. It’s also well known in political groups the relationship between Oscar Ortiz’s Nueva Democracia Foundation, the ATLAS Foundation, the Republican Party’s International Republican Institute (IRI), and the National Endowment for Democracy (NED).

However, the main coordinator of the coup is named Jorge Quiroga. Tuto Quiroga was vice-president of Dictator Hugo Banzer and Bolivia’s President between 2001 and 2002. Since then, his ties to the different US State Department agencies have been on the rise, as well as to the Organization of American States (OAS). In fact, he was in charge of the election observation mission that backed the fraud committed by Juan Orlando Hernandez in Honduras.

Right now the main State Department instructions in Bolivia are issued by Tuto Quiroga. He is not only the coup’s main architect but he has also been responsible for Añez’s self-proclamation. Jurist Luis Vasquez Villamor, former deputy by Podemos (Quiroga’s party) found a 2001 court ruling (based on the 1967 Constitution, void since the 2009 Constitution was passed) that allowed for the cover and legal justification to the coup d’état.

Tuto Quiroga’s major mission now is to work on the return of the Drug Enforcement Administration (DEA) and the United States Agency for International Development (USAID) to Bolivia. The two of them were expelled under the Morales Administration so as to dissolve the dual power that was going on in the country. The agencies return would allow coup plotters to control the Executive with them but division in the police and especially the Army could begin now as long as they keep on repressing the population. The situation is not easy within the process of change either. Even though part of the territory and two-thirds of the Pluri-National Legislative Assembly are under MAS control, polarization has turned into hatred while the government’s repression is in fact even aimed at deputies and senators.

If the counter-revolution has been successful, at least so far, it is due to an excess of democracy, understand this one as the equalization and distribution of wealth, as appointed by Garcia Linera, the answer can only be the radicalization of democratic stances. A radicalization that entails not only rebelling against dictatorship but also Evo Morales’ return to pacify the country.

The Evo factor is decisive in this equation. If he does not return and cohesion in the popular movement is lost, the pacification factor today could become a destabilization factor tomorrow.

It’s the time now to take care of Evo but also to guarantee his return to Bolivia, supported by the international community. The future of the Bolivian process of change depends on it.