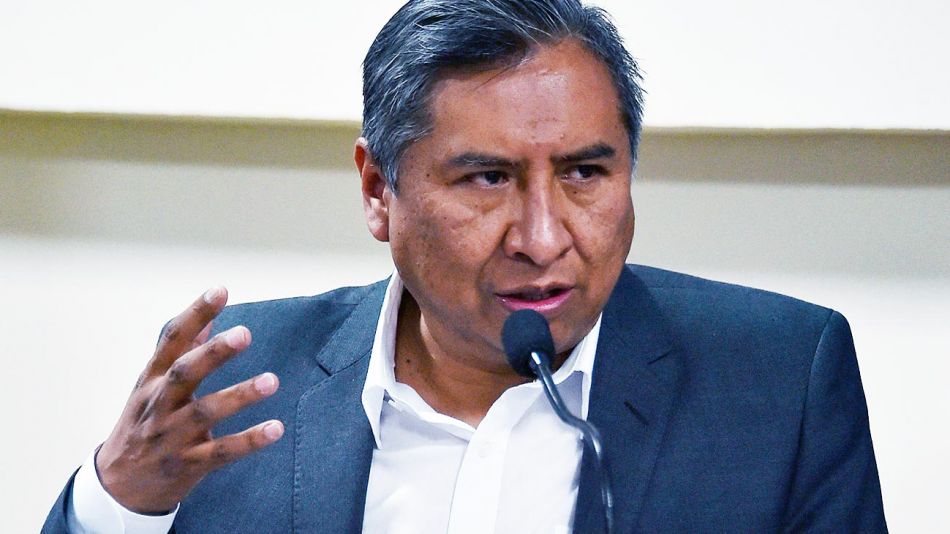 Bolivia: “We Are The Center Of The World”

A speech by Rogelio Mayta, Bolivia’s Minister of Foreign Affairs,  on May 12, 2022, during the End of the World Summit of the Progressive International.

Humanity is at a turning point. Not only war and climate change threaten life on our planet. Ideologies and some people as well.

We know that money and the production of wealth and well-being have created a widening and deepening gap between people, neighborhoods, cities and countries that has been exacerbated in the wake of the pandemic.

So I would like to stop thinking of ourselves as the poor periphery of an unequal, colonial and racist globalization.

In Bolivia, since the beginning of this century, we have been struggling with some of the most important and decisive issues for the future of the human species: water, our sacred coca leaf, the goods that we can distribute thanks to the generosity of the Pachamama and – of course – the right to decide collectively about our lives.

Every struggle, every effort made from places like Alto Cochabamba confronted us and confronts us not only with the owners of power and money. At the heart of each of our struggles is the imperative need we have to stay alive, to finally build a world that fits everyone to live with dignity.

Not tomorrow, today. Bolivia is the center of the world, as is North Dakota or Chiapas, or the poor neighborhoods of Caracas.

Yes, we are poor and far from the omnipotent centers of political and economic decision-making. But at the same time we live in the center of the most important battles. Battles that are fought from our small trenches, communities, neighborhoods, cities, jungles and forests.

What I am telling you is not for us a simple change of discourse. We want to think of ourselves differently, because in this way, in the center of the true struggle for life, we can look at the world and our sisters and brothers with new eyes. Condemned to marginality we will not get very far.

So building from the hundreds and thousands of centers where life is defined, fighting for the most basic things: water, food, shelter, education and dignity. Perhaps we can build a new horizon. By weaving together our needs, our achievements and even our mistakes, it is possible to dismantle centuries of colonialism, of brutal plundering of territories and forced subjugation of the people.

In Bolivia we have had to draw on our millenary Aymara and Quechua traditions and knowledge, for example, peoples who define much of what this country is. But it is not only indigenous peoples that have fought against capital, nor is it the obligation of any people to be the vanguard or the moral reserve for the human species.

We are what we are, we know among ourselves what our grandfathers and grandmothers bequeathed us. Therefore, from our lived experience I invite you to start this path first, resignifying what matters, to then look at ourselves in this way, as the people looked at each other in the streets of Cochabamba after the Water War, knowing that we can, that there is another life waiting behind the barricades, the strikes and the roadblocks and that it is our common heritage.

It also happened to us in October 2003, when El Alto became for a few moments the Center of the world. With sticks and stones, with will, the Aymara rejected the sale of our wealth. The death prescribed by a corrupt and foolish president.

There, in that burning epicenter, everything that is vital was at stake. The centers of world power and decision-making were our periphery. I definitely do not think we are the periphery. This mini-census is not intended to be paralyzing. Quite the contrary.

As a Bolivian, as an Aymara, as someone who has lived inside the most decisive battles to change everything, I know that we cannot ignore the daily catastrophe we live in Sri Lanka, in the boats full of refugees in the Mediterranean, in that wall that separates North America from all America, in the aboriginal territories of Australia, or in the starvation of children in La Guajira in Colombia.

To look at the immensity of our horizon, to daydream as we look at the Andean altiplano and its peaks, perhaps we should give ourselves a different perspective, a new centrality.

In Bolivia, as in so many other places, what has been at stake is not a set of goods or a piece of land, nor a government. We have fought to defend life, to nurture it and see it grow with dignity. We know of nothing more important to do in these difficult times.

We are the center of the world.