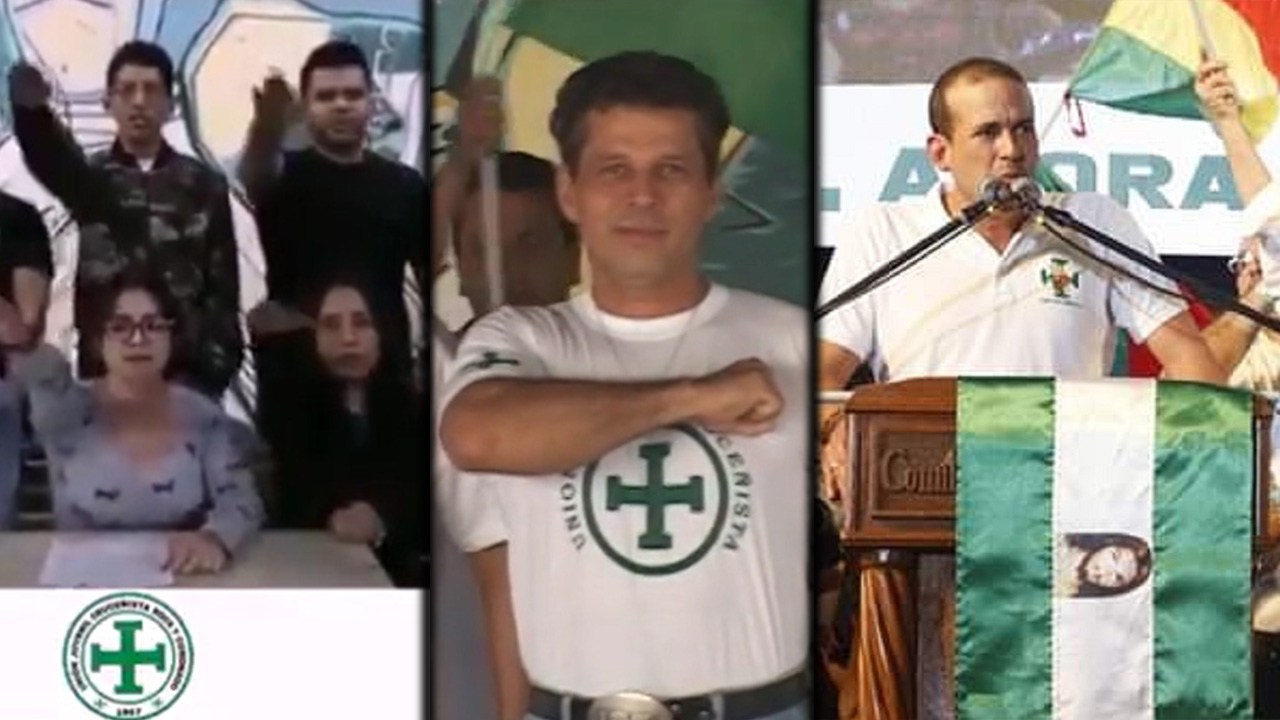 By the time a team of electoral observers arrived in Bolivia – including members of The Grayzone – right-wingers had already published a flood of online threats, smearing them as “terrorists” and circulating photos captured while stalking them in the airport.

Santa Cruz, Bolivia – Contributors to The Grayzone including Max Blumenthal, Anya Parampil, and Ben Norton traveled from the United States to Bolivia in order to join a delegation of independent international observers of the country’s October 18th presidential election – the first vote since a November 2019 US-backed military coup removed the country’s elected president.

Little known to us, however, was that we were being stalked on the way. A number of Bolivians covertly took photos of us as we waited for a connecting flight in the airport in Chile, snapped more as we boarded the plane, and published the images on social media, along with our personal information and a flight itinerary showing when we would arrive to Bolivia. The incitement campaign has led to a wave of physical threats and calls for harassment.

It remains unknown whether those who stalked and photographed us were private citizens or members of the intelligence apparatus surrounding the hardline Minister of Government, Arturo Murillo Prijic, who is considered the enforcer of Interim President Jeanine Anez’s coup administration.

Hours after photographs of us were published on social media, Murillo issued a thinly veiled threat. “Our elections will be a democratic celebration, the more observers there are, the better for everyone. We warn agitators and people who seek to generate violence, they are not welcome. We will put them on a plane or behind bars. Behave, we know who you are and where you are.”

Bolivia’s Director General of Migration, Marcel Rivas, escalated the incitement, tweeting, “The [Supreme Electoral Court] sent invitations to “monitor” the elections to 4 well-known extreme left agitators linked to the criminal Maduro regime. The Ministry of Migration will enforce law 370: those who violate the determined purpose of their stated objective will suffer the consequences.”

By the time we arrived in Santa Cruz, an eastern city that serves as the power base of the Bolivian right-wing, an online network of Bolivian far-right activists had unleashed a deluge of threats, outlandishly libeling us as drug-linked “terrorists” and supposed paid disinformation agents, inciting violence against international electoral observers officially recognized by the government of Anez.

We have obtained official letters of invitation from Bolivia’s Supreme Electoral Court (TSE) / Plurinational Electoral Organ (OEP). Blumenthal, Parampil, and Norton are part of a US delegation of electoral observers organized by the human rights group CODEPINK: Women for Peace. Wyatt Reed, who has also contributed to The Grayzone in the past, is also here in his capacity as a CODEPINK election monitor.

While we have our own personal political views, we arrived in Bolivia as independent electoral monitors following the guidelines presented to us by Bolivia’s electoral court, and outlined by the United Nations. 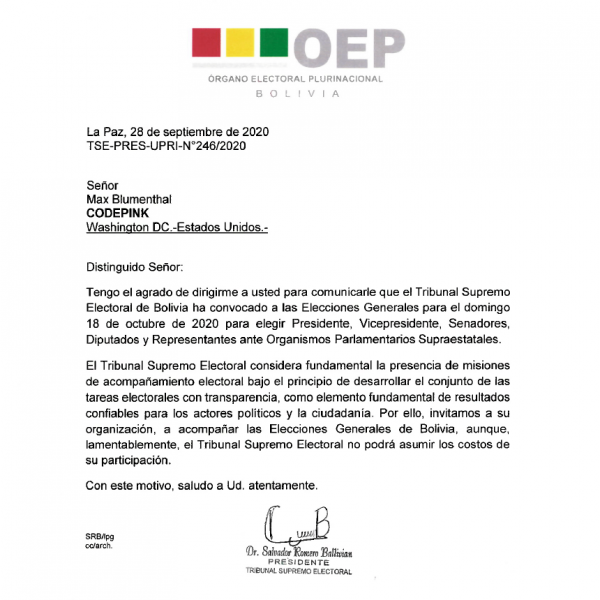 The flood of threats that greeted us is just one example of the suffocating atmosphere of right-wing intimidation in Bolivia on the eve of the election. The campaign of menacing has targeted not only the Movement Toward Socialism (MAS) party of former elected President Evo Morales, which is leading in all major polling, but even international electoral observers approved by the government of Anez.

Amid the atmosphere of intimidation, the unelected de facto government has arrested and banned numerous MAS candidates. Meanwhile, the Western-backed Bolivian NGO Ríos de Pie, which played a leading role in the coup to remove Morales, has threatened journalists, including TeleSUR reporter and US citizen Camila Escalante.

The OAS arrives after sanctioning a coup

In addition to allowing the entry of a small team of electoral observers from CODEPINK, Bolivia’s unelected transitional administration signed an agreement to allow the Organization of American States (OAS) to oversee the October 18 election.

This pact was deeply controversial, given that the OAS and its avowedly partisan, coup-supporting Secretary-General Luis Almagro played a key role in the 2019 putsch.

The OAS spread unsubstantiated claims accusing the leftist government of President Morales of electoral fraud. These accusations have since been debunked by leading international experts, including scholars from the Massachusetts Institute of Technology (MIT) and the Washington, DC-based Center for Economic and Policy Research (CEPR).

CEPR experts have furthermore warned that changes made to the electoral process by Bolivia’s unelected transitional administration threaten to make the upcoming 2020 vote much less transparent than the 2019 election.

Last year, CEPR was able to use Excel sheet data made available by #Bolivia’s electoral authority to show that the OAS had no evidence to support its statement challenging results showing Evo Morales had a 1st-round win. This time, that may not be possible https://t.co/ejj1Ny7fFK

Most of the threats targeting international observers and journalists have emanated from Bolivia’s commercial hub, Santa Cruz de la Sierra. The richest city in the country, Santa Cruz is the power base of the Bolivian right wing, which has a long history of racism against the nation’s indigenous majority.

Santa Cruz was instrumental in the November 2019 coup, in which Bolivia’s democratically elected President Evo Morales was forced to resign by his own military. Since then, Bolivia has been run by an unelected right-wing regime that is not recognized by neighbors such as Argentina, but which enjoys staunch support from the United States.

As The Grayzone electoral observers arrived in Santa Cruz on October 14, we saw a rally held by supporters of Luis Fernando Camacho, a major figure in the 2019 coup, who is now the far-right candidate in the upcoming election, running against both the MAS and the center-right candidate Carlos Mesa. (State Department cables published by WikiLeaks show that Mesa has coordinated closely with the US government for more than a decade.)

Camacho was the leader of a powerful right-wing group called the Pro-Santa Cruz Civic Committee, which was co-founded by Croatian Nazi collaborators who fled to Bolivia after WWII, and whose young followers are infamous for fascist-style salutes and anti-indigenous violence.

After the Camacho march, we saw his supporters mingling in central Santa Cruz with distinctive white t-shirts reading “Creemos,” or “We Believe,” the name of the far-right candidate’s political party.

It was some of these fanatical Camacho supporters who took to social media to whip up an intimidation campaign against international electoral observers.

On social media platforms, Bolivian extremists smeared The Grayzone editor Max Blumenthal as a “terrorist” and supposed “propagandist,” who purportedly came to “burn the entire country.”

Many of these fanatical users tagged the US State Department, the US embassy in Bolivia, and officials from the unelected transitional regime, including the far-right Minister of Government Murillo, in their incendiary and often libelous commentary.

A far-right Bolivian activist and coup supporter, Nadia Beller, published photos on Facebook and Twitter of The Grayzone electoral observers. The images make it clear that we were being closely monitored while in the airport in Chile. Photos of Blumenthal as he boarded the airplane in Santiago were also published online.

Beller shared the itinerary of when our flight was due to arrive in Santa Cruz, implicitly encouraging her followers to come to the airport to threaten election monitors.

She also falsely smeared Max Blumenthal as a “disinformation expert from RT.”

Other extremists called for creating groups and stalking Blumenthal, following and “supervising” him, filming everything he does.

A fanatic living in Virginia threatened the safety of electoral observers by falsely calling them a “terrorist threat in Santa Cruz.”

This US-based user, Teddy Rivero, libeled Blumenthal with a series of outrageous slander, claiming he “is one of the most infuriating enemies of Bolivia’s democracy, very close to pro-Cuba-Chavista drug trafficking.”

American regime-change lobbyists also contributed to the campaign to endanger The Grayzone electoral observers. Democratic Party activist Kareem Rifai, who co-founded the group Students for Biden at Michigan, re-posted the photos of The Grayzone electoral observers at the Chilean airport and falsely tried to link Blumenthal to Russia and Venezuela, claiming they will be “working in overdrive to incite bloodshed in an already crippled Bolivia.”

Rifai has also worked in 2019 as a lobbyist intern at the Syrian American Council, a neoconservative group that has lobbied for direct US military intervention in Syria, and hosted an opposition extremist who called for the genocide of Syria’s Alawite religious minority, while also campaigning to censor Blumenthal’s book “The Management of Savagery.”

In reality, numerous reports and our personal testimony on the ground shows that it is Bolivia’s right-wing political forces that have been inciting bloodshed, by threatening international electoral observers, journalists, indigenous activists, and MAS party candidates and supporters.

Top Bolivian officials have themselves stoked these threats. The de facto government’s representative to the OAS, Jaime Aparicio Otero, a staunch right-wing activist and supporter of the coup, publicly attacked electoral observers from the Progressive International and Puebla Group. Aparicio falsely smeared these independent monitors as “activists from MAS” who have supposedly “come to provoke.”

In response to Aparicio’s inflammatory remarks, a Bolivian right-wing activist posted a photo of Blumenthal and claimed he is an “instigator” who is supposedly spreading “false information.”

Aparicio Otero has himself expressed extremist views. In November 2019, days after the coup, Aparicio tweeted from Maryland that, “For the intolerant international left, being Catholic and of European descent has become a crime.” He accused the left of “crucifying” Camacho, and insisted, “That left is what has sunk Latin America.”

Another Bolivian right-wing extremist falsely implied that Evo Morales or Venezuelan President Nicolás Maduro was paying Blumenthal, linking to a photo of when he carried out a strictly journalistic interview with Maduro.

She threatened, “Bolivia will be watching you, every single step that you make.”

Other far-right activists also falsely accused The Grayzone electoral observers of “being paid by Morales,” calling Blumenthal a “parasite” who “is in our country to cause disturbances.”

The Grayzone is a completely independent media outlet with no fiscal relationship with any government.

This fact did not deter a horde of Bolivian right-wingers from claiming that Blumenthal is a “‘terrorist’ who works for the communists,” who came to “produce chaos.”

One wrote ominously, “Bolivians will be watching you, in Bolivia the socialists do not last… Do not misbehave.”

Other fanatics tagged the US embassy, claiming the electoral observer Blumenthal “is in Bolivia preparing to burn the entire country.”

This environment of threats and intimidation has made it clear that supporters of Bolivia’s unelected coup regime are not open to holding a free and fair election on October 18, one in which international observers, yet alone candidates from the left-wing MAS party, are able to exercise their fundamental democratic rights. Whether leaders of that regime will allow a fair vote to proceed remains to be seen.