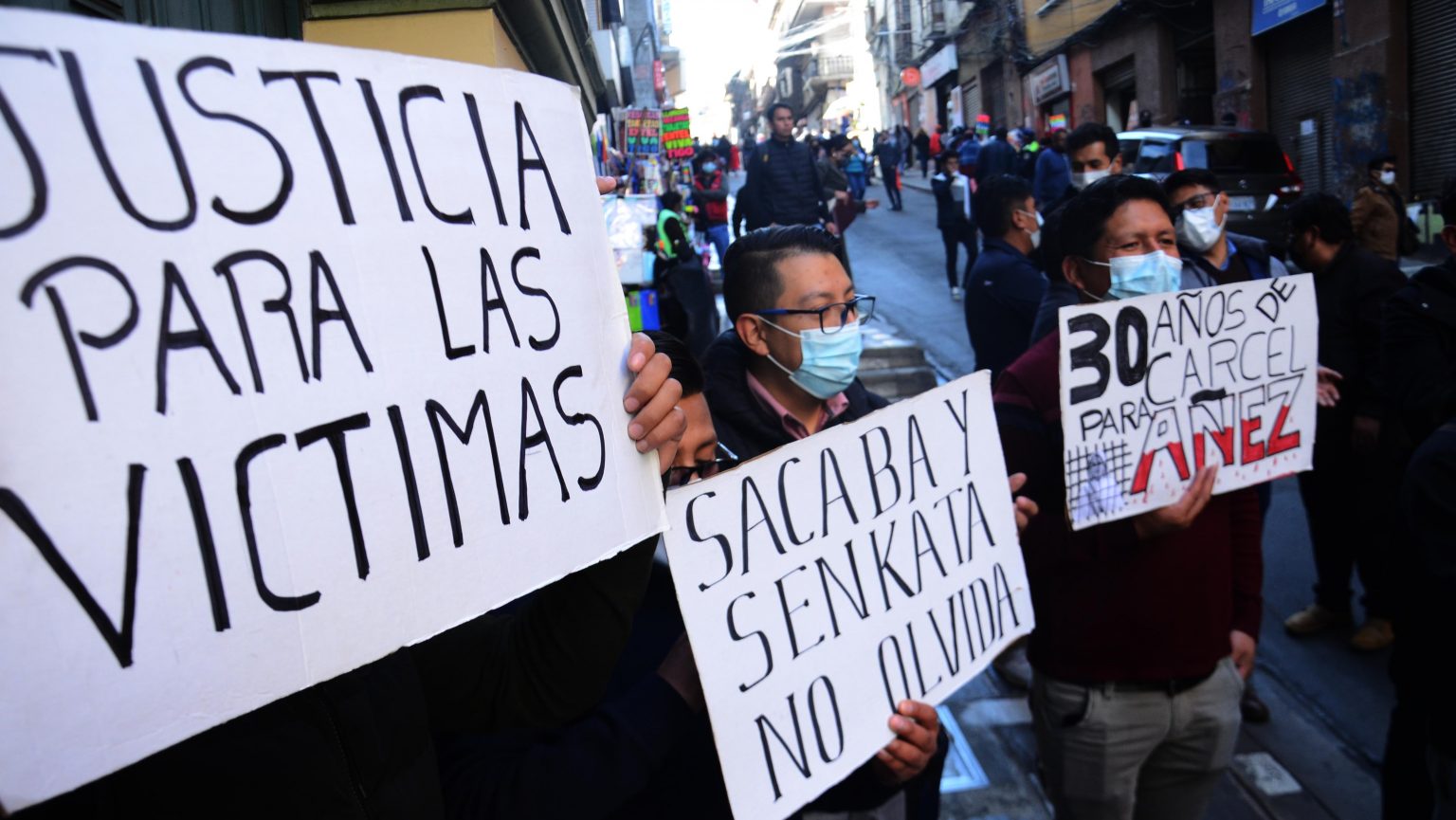 Above Photo: The relatives of the victims of Jeanine Áñez’s regime demonstrate outside the La Paz Court of Justice on June 6 demanding justice. Josue Cortez / Agencia Boliviana de Información.

The First Anti-Corruption Sentencing Court of La Paz sentenced former de-facto Bolivian President Jeanine Áñez to 10 years in prison in the ‘Coup d’état II’ case on Friday, June 10. In the case, Áñez stood accused of crimes of acting against the constitution and illegally assuming the presidency of the country in November 2019, following a right-wing civic-military coup that overthrew democratically elected socialist President Evo Morales. The court found her guilty of “breach of duties” and “resolutions contrary to the Constitution and the Law” in her capacity as the former second Vice President of the Senate.

In addition to Áñez, eight former police and military officials also faced charges in the trial. Over 70 pieces of evidence and around 20 witness statements were presented. All evidence showed that Áñez self-proclaimed herself as the President without considering the line of succession and did so before an empty Senate in a session that lacked quorum. They also proved that the former heads of the security forces had a plan prepared for Áñez to take power.

Attorney General of the State Wilfredo Chávez celebrated the trial and verdict. He said that the conviction against Áñez and former military and police chiefs is “a sign that democracy and justice work in the country.”

Meanwhile, Defense Minister Edmundo Novillo said that the trial in the case leaves a precedent and a message so that events such as assuming the presidency in violation of the constitution are not repeated. “This sentence is historic because the events of 2019 cannot happen again, that a president is inaugurated by a military man, that cannot happen. We cannot alter, break the constitutional order of a country, under any argument or justification. The precedent had to be stronger, a greater penalty so that the message to everyone is exemplary,” said Novillo.

Summary Of The Last Five Days Of The Trial

The trial against Áñez in the case resumed on June 6 after various attempts by her lawyers to disrupt and delay it. Even on that day, Áñez’s lawyers reportedly caused a delay of about two hours in the commencement of the trial, a tactic that had been used earlier as well. Finally, the hearing was adjourned until the next day soon after it began due to alleged deterioration in Áñez’s health, another reason why earlier hearings had been postponed.

Nevertheless, on June 7, the legal process resumed and was attended by a representative of the United Nations. The Prosecutor’s Office or the Public Ministry and the Government Ministry presented their allegations and substantiated their accusation against Áñez. The commission of prosecutors in charge of the case requested the court to sentence Áñez to 15 years in prison. The lawyer of the Government Ministry also requested that all defendants be sentenced to 15 years in prison.

The trial continued on June 8, when the State Attorney General’s Office presented its arguments and joined the request of the Public and Government Ministries in demanding 15 years imprisonment for Áñez and other former high-ranking police and military officials. The Deputy Attorney for Supervision and State Intervention, Kaleff Clemor, demanded that the court punish the accused with an exemplary sanction to prevent this type of event from being repeated in the future. “Your authorities must sentence Mrs. Jeanine Áñez Chávez and also the members of the military high command (…) to establish an exemplary sentence, so that no one in the country seizes power in this way again, assaulting power and putting democracy at risk,” said Clemor.

On June 9, the lawyer of the other defendants was expected to present arguments before the judges. However, the hearing started with a delay once again due to Áñez’s alleged poor health. Her defense requested the court to suspend the hearing, but the authority decided to continue with it and asked the Miraflores prison medical staff to examine the inmate. With an hour of recess, due to repeated interruptions by Áñez’s lawyers, the trial was reinstituted.

On June 10, after four days of hearing in which the accused and the accusers presented their final arguments before the judges, the members of the court visited the defendants in the Miraflores and San Pedro prisons to hear their defense before delivering a verdict. After more than seven hours of deliberation, the court found all defendants guilty and handed down sentences for them.

The relatives of the victims of the Sacaba and Senkata massacres and other human rights violations committed under the Áñez regime had been demonstrating outside the court since June 6, demanding justice and the maximum sentence of 30 years. While they welcomed the verdict, they condemned the prison term saying that “10 years in prison is not enough” and indicated that they would continue their struggle so that Áñez is punished for all the crimes. “Now the sentence is ten years, later it will be more,” they asserted.

Members of the Committee for the Promotion of the 2019 Coup Trial, who had organized various protest vigils and had set up camps outside the Prosecutor’s Office in Sucre and the Miraflores prison, where Áñez is being held, welcomed the sentence. They also vowed to remain mobilized and maintain public pressure on authorities to begin the trial in the “Coup d’état I” case and in the massacres, and prosecute all alleged intellectual and material authors of the social and political crisis of 2019.

The Pact of Unity, the national alliance of trade unions, social movements and grassroots organizations, had held a press conference on June 6 and demanded that the criminal complaint be expanded to include former Presidents Carlos Mesa and Jorge Tuto Quiroga, businessman Samuel Doria Medina, and Governor of Santa Cruz Luis Fernando Camacho, who in their opinion were the intellectual and material authors of the coup.

Ever Rojas, the executive secretary of the Unified Syndical Confederation of Rural Workers of Bolivia (CSUTCB), stated that “they took Áñez to the presidency and through a decree, they massacred the people. They also raided the state coffers and defenestrated the Bolivian economy. These individuals must appear before the Justice to be criminally sanctioned according to the degree of participation.”

On the same day, the Bartolina Sisa National Confederation of Peasant, Indigenous, Native Women of Bolivia demanded that other coup plotters should also be prosecuted. “The coup d’état unleashed a massacre on our people, she has to respond to justice, she has to be punished (…) Here, they want to cover up what was experienced with Mrs. Áñez as head, rather they should continue prosecuting the other actors such as Camacho, Tuto, Waldo Albarracín (former Ombudsman), Mesa,” said Flora Aguilar, a member of the Bartolina Women’s Movement, in interview with Bolivia TV.

Áñez was in power for a year until she was removed from office by the landslide victory of the Morales’ Movement Towards Socialism (MAS) party in the October 2020 general elections. During her short time in office, her regime committed severe human rights violations. She unleashed an unprecedented level of repression against those who took to the streets in rejection of the coup. She authorized the security forces to use extreme force to suppress social protests. She even passed a decree (4078) that exempted police and military officials participating in repression operations from criminal responsibility. This resulted in the massacre of 11 peaceful protesters in Sacaba city on November 15, 2019, and of another 11 in Senkata on November 19, 2019, by security officials.

The acts of violence and human rights violations committed under the Áñez regime were confirmed by the Interdisciplinary Group of Independent Experts of Bolivia (GIEI-Bolivia) sent by the Inter-American Commission on Human Rights (IACHR). In its report, the GIEI verified that the coup regime was responsible for massacres, torture, sexual abuse, persecution, illegal detention and summary executions of those who rejected the coup. The report also validated that the violence was characterized by ethnic and racial discrimination against Indigenous people.

Since coming to office in 2020, the government of President Luis Arce has been continuously working to guarantee justice and reparation to the victims and their families, and bring the coup’s perpetrators to justice.

Áñez was arrested and placed in detention in March 2021 on charges of terrorism, sedition and conspiracy, in the case known as the “Coup d’état I” case. The Prosecutor’s Office has also charged her with the crime of “genocide” for the 38 deaths that occurred in repression incidents, including the Sacaba and Senkata massacres, during her rule.