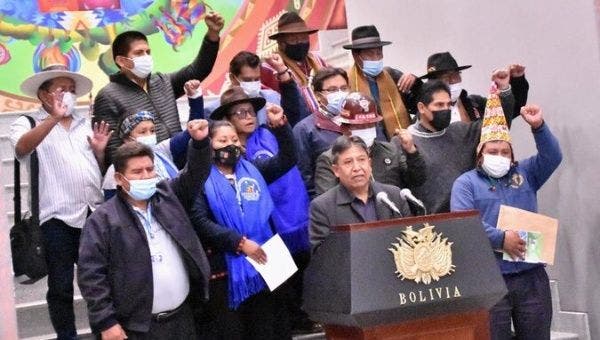 Above Photo: Bolivian Vice-President David Choquehuanca Said, “We Have An Awakened Bolivian People, Capable Of Organizing Themselves, Of Defending This Democracy That Has Cost Us Blood And Lives, We Bolivians Must Not Allow This History To Repeat Itself.” | Twitter/@LaramaDavid.

Several Bolivian Unions Have Described The Call For An Indefinite National Strike As An Illegitimate Action.

Social organizations and various Bolivian unions rejected this Friday the call for a national strike for next November 8, made by sectors of the opposition that participated in the 2019 coup d’état, as well as any attempt that seeks to destabilize the country.

Union leaders branded this call as illegitimate, stating that it aims to affect the economic reactivation of the South American country, in the aftermath of the de facto government and in the midst of the current COVID-19 pandemic.

The executive secretary of the Bolivian Mining Workers Union Federation (Fstmb), Gonzalo Quispe, pointed out that his union is very clear about its position of support to the Government, and remarked that “they will not allow any destabilization attempt that harms the economic reactivation process of the nation.”

“It is costing us to return to normality after a political crisis experienced in 2019 and a rigid quarantine due to the pandemic in 2020; now, thinking of paralyzing the country is totally irresponsible. Therefore, we condemn and repudiate these attitudes that are detrimental to the development and growth of the country,” he added.

For his part, the Vice President of the Bolivian Executive, David Choquehuanca, pointed out that the call for a strike seeks to sow confusion among the people once again. “It is clear that they want to generate chaos, they want to generate instability; (but) the people are not going to allow the return of those days of mourning, crying and discouragement to our country,” he said.

During an act in Santa Cruz, Bolivian President Luis Arce also commented that “we have seen the media (…) talking about an eventual stoppage of activities in the department and supposedly in the country; but from here we want to tell you that the Bolivian people want to work, the economy does not stop.”

“Government and social organizations denounce persistent destabilizing attempt of the right wing that participated in the coup d’état in November 2019 and now calls for an indefinite strike on November 8.”

Similarly, the representative of the Departmental Medical Federation of Tarija (FMDT), Antonio Molina, said that “the civic strike is totally detrimental to our brothers from Tarija, who protect health in this difficult moment of struggle against the Covid-19 pandemic. They cannot be unprotected, it is a total irresponsibility on the part of the civic committee to expose our brothers.”

The health personnel affiliated to the FMDT ratified that next Monday they will work normally in that department, “since that is our main duty as physicians.”

The condemnation of the strike was also echoed by the transporters of the Federación Departamental de Choferes 1 de Mayo of the city of La Paz.

Its executive secretary, Edson Valdez, remarked that “as a department of La Paz, we are not going to comply with the strike on Monday, our comrades need to be economically reactivated, that is why there is this determination.”

He added that this mobilization has political overtones. “We, as carriers, do not agree with this, because we have seen in the de facto government of Jeanine Áñez all the authorities that are appearing in the media, who have held political positions, abused them and committed different crimes and offenses. That is why we do not agree with them.”