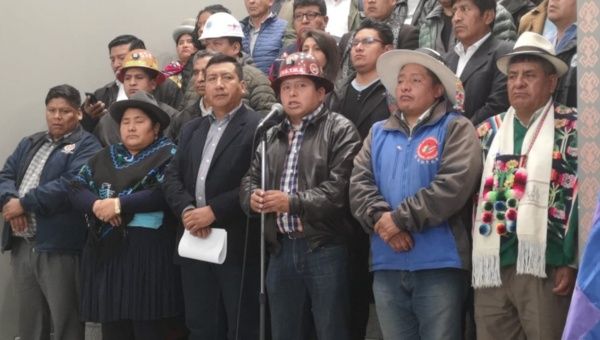 Above Photo: Social movements in defense of democracy, against opposition violenc

After the final results showed Evo Morales winning the first round vote by more than ten percent, opponents of Morales were expected to challenge the result and stage a coup. As described below social movements are mobilizing to defend Morales’ victory.

Telesur also reports that international election observers in Bolivia are saying “Everything has taken place with total normality and regularity.” Further, one of the leading observers, Rixi Moncada, the president of the electoral court in Honduras, praised the level of independent monitoring that took place. “The vote count is open to all who want to see it… we could see the noting down of each of the votes from each ballot paper.”

And, Manu Pineda, a Spanish lawmaker in the European Parliament, praised the legitimacy of Bolivia’s electoral process, saying “In Spain ballots are counted and assigned very quickly, however in Bolivia, each ballot paper is held and shown to all, so there cannot be any manipulation, the vote is then recorded publicly on a board for all to see. The count takes a very long time, but we can see that it’s a positive thing because it stops any possibility of fraud.”

Carlos Mesa, who was the second place finisher called for street mobilizations that ended in violence at vote-counting stations, with some opposition protesters burning ballots and the buildings, where counting was taking place. Mesa originally endorsed the results when they temporarily showed him having a slightly larger vote share but now says he does not recognize the preliminary results after they indicated that Morales won for a first-round victory.

Bolivia invited the Organization of American States to carry out an audit of the final count after they raised concerns after the official count gave Morales a 10-point lead over rival Carlos Mesa. Mark Weisbrot of the Center for Economic and Policy Research refuted the OAS’ claim of fraud by describing the voting patterns and providing links to the vote counts.

On Monday night right-wing protesters launched numerous violent attacks across Bolivia including burning down vote counting centers and assaulting Indigenous supporters of Morales. In reaction to the protests and violence a coalition of Indigenous groups and workers unions declared a state of emergency, calling for mobilizations in the streets to defend democracy.

On Tuesday morning, CONALCAM, a coalition of Indigenous groups and workers unions that are affiliated to Morales’ ‘Movement Towards Socialism’ held a press conference where they declared a state of emergency, calling for mobilizations in the streets to defend democracy.

Right-wing protesters have launched numerous violent attacks across the country on Monday night as preliminary results indicated that leftist President Evo Morales is on course for a first round victory. Attacks included the burning down of vote counting centers and assaulting Indigenous supporters of Morales. In response, social movements have called for a state of emergency, and a mobilization of workers in the streets to defend the vote.

The violence followed a call by opposition candidate Carlos Mesa for his supporters to take to the streets and not recognise the preliminary results being published by the electoral authorities.

The first such action was in the city of Sucre, an opposition stronghold, where rioters set fire to the regional electoral authority. Elsewhere in the country, government buildings were attacked in Tarija, Oruro, the campaign headquarters of Morales’ party were vandalised. In Cochabamba, where Morales is leading the vote, protesters attempted to seize control of the Campo Ferial, which is the hall in which the votes were being counted.

Other actions followed in La Paz, where the opposition supporters assaulted an Indigenous woman who supported Evo Morales. She spoke to the media following the attack saying, “I was just standing over there when a stone hit me”. Also in La Paz, rioters blocked election materials from being delivered for the vote, this meant that the counting had to be suspended, just 48% of the votes have been counted, in a region where Morales is expected to win a large share of the vote. Meanwhile, in the opposition stronghold of Santa Cruz, 100 percent of votes have been counted, as protesters allowed the count to go ahead.

There are concerns that the opposition will not recognise the full results if they give Evo Morales a victory in the first round. On Tuesday morning, CONALCAM, a coalition of Indigenous groups and workers unions that are affiliated to Morales’ ‘Movement Towards Socialism’ held a press conference where they declared a state of emergency, calling for mobilizations in the streets to defend democracy.

Juan Carlos Guarachi, leader of the Bolivian labor union federation (COB) said; “We declared ourselves in a state of emergency and the first national, peaceful, mobilization will be on Wednesday, October 23 at San Francisco Square at noon…We denounce the oligarchic and privatizing interests that hide behind these violent actions”.

More results are expected later in the day, and President Morales will meet with international observers.