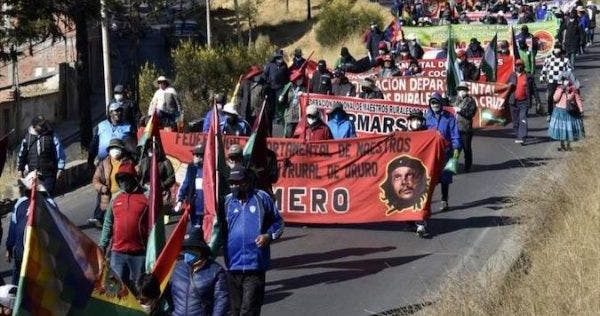 Bolivians Take To The Streets Against The Añez Government

Workers demand definitive confirmation of the holding of general elections in September.

Bolivia’s Workers Central (COB) Tuesday called for tens of thousands of people to hold a mass protest in several cities against the coup-born regime led by Jeanine Añez.

One of the demonstrators’ main calls is the definitive confirmation of the general elections for September 6.

“We ask for a democratically elected government that resolves the country’s economic and health crisis caused by COVID-19,” Huarachi added, adding that citizens also demand the resignation of the Education Minister Victor Hugo Cardenas.

“Cardenas is a liar. Our education system is not inclusive, it lacks methodology, and requires investment in both distance learning and virtual learning,” the COB leader assured.

Thousands of teachers also gathered at the government’s headquarters in La Paz to launch slogans such as “Cardenas, resign” and “Coup-born government”.

Workers are protesting in Tarija, Bolivia, a normally conservative city, against the coup regime's mismanagement of health, education, and employment. pic.twitter.com/6vF1i3uBSU

“We reject the coup-born government’s decrees which are related to virtual class platforms and the National Program for Reactivation of Employment,” Huarachi announced.

Bolivia has been living in political uncertainty since November 2019, when former President Evo Morales suffered a coup d’état.

After the annulment of the October elections, in which the Socialist candidate was actually elected, Añez proclaimed herself Bolivia’s Interim President.

After several attempts to perpetuate itself in power, her regime announced that the new date for elections will be September 6.

In recent days, however, the Añez administration recommended postponing the elections once again because of the pandemic.

#Bolivia | “We are hungry!” the demonstrators were screaming… More protests are expected in this area on Tuesday. pic.twitter.com/7s8Gq5vNMu