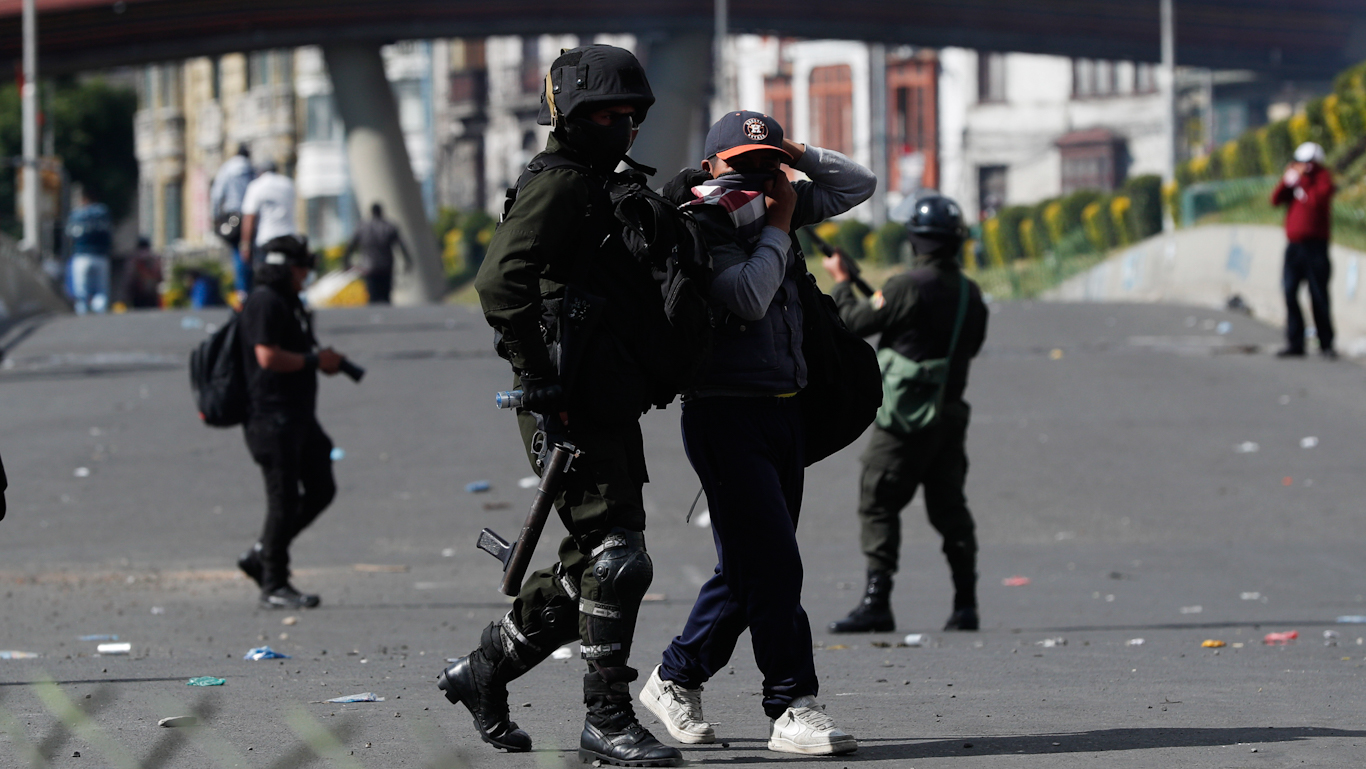 Above Photo: Police detain a backer of former President Evo Morales after they launched tear gas at a massive funeral procession that was marching into La Paz, Bolivia, Nov. 21, 2019. Juan Karita | AP

Facing increased resistance to its rule, the new “coup” gov’t in Bolivia is purging any potential threats to its authority, including teleSUR and other alternative media.

Facing increased resistance to its rule, the new “transition” government of Jeanine Añez in Bolivia has begun to purge and censor potential threats to its authority, including in the media. TeleSUR, an international media network that began as a collaboration between left-wing Latin American nations, including deposed President Evo Morales’ Bolivia and Venezuela’s Hugo Chavez, and which espouses an openly leftist and anti-imperialist outlook, received confirmation that it would be taken off the airwaves as part of what the government calls a “reorganization” of the airwaves. TeleSUR openly opposed the U.S.-backed military coup d’état that installed Añez as head of state earlier this month.

New Communications Minister Roxana Lizárraga announced that this was part of the “dismantling of the propaganda apparatus of the dictatorial regime of Evo Morales,” claiming that Morales’ “militants who misused the state media system” are being “withdrawn.”

TeleSUR was originally conceived as a counterweight to Western-dominated media system and attempted to bring the voices of working-class Latin Americans to the fore. It also offers an alternative to local mainstream media, overwhelmingly owned and controlled by Latin American elites who have been particularly hostile to progressive governments such as Morales.’

New Bolivian government taking TeleSUR off the air in a process of “reorganizing” the media. pic.twitter.com/4taJ69xBOm

This is the latest episode in a general assault on the media, as the Añez administration attempts to gain control over Bolivia’s means of communication. Multiple journalists have been shot, while Al-Jazeera correspondent Teresa Bo was tear-gassed in the face live on air at point-blank range by riot police as she stood alone, away from the protests, talking to the camera. Last week Lizárraga appeared on television announcing she would persecute any journalists involved in what she called “sedition,” noting that she already had a list of “troublesome” individuals and outlets. Bolivia TV was also taken off the air earlier this week.

In its efforts to neutralize dissent, the Añez administration has found a keen and enthusiastic ally in the local mainstream press.  In a shocking moment captured on film, local media harassed an independent journalist, detaining him and handing him over to the armed forces. The local press has largely endorsed the events and celebrated Morales’ demise, presenting the situation as a democratic transition rather than as a coup.

Wow.
The whole time I’ve been in Bolivia I’ve heard about the “prensa vendida,” aka the sellout press. Watch here as they harass an independent journalist, keep him from doing the job they *should* be doing, then hand deliver him to the army!
Anyone who shows this gets shut down. pic.twitter.com/wY5dwgu4lS

The crackdown extends beyond media, as the new government has effectively declared the deposed Movement to Socialism (MAS) party illegal, arresting MAS officials and forcing others into hiding or exile in what new government minister Arturo Murillo called a “hunting” down of political opponents. “They’re drowning the Bolivian people in blood,” declared deposed Vice-President Álvaro García Linera from Mexico, where he was granted asylum.

Añez has granted security forces immunity from all crimes committed during the “re-establishment of order.” Those same forces reportedly carried out massacres in the city of Cochabamba and the town of Senkata, just south of the country’s capital, La Paz.

Tens of thousands of demonstrators, many carrying the Wiphala flag, a symbol of indigenous identity, marched to La Paz alongside the coffins carrying the victims of the Senkata massacre, demanding the resignation of Añez and an end to the bloodshed. The march stretched out for miles. MintPress News cameras captured the events.

Bolivia: Tens of thousands march to the La Paz with coffins carrying the bodies of the Senkata massacre. @camilapress https://t.co/KMvMqwHVjw

Once the march came into contact with security forces in the capital, it was met with a barrage of tear gas, and downtown La Paz was engulfed in smoke as tens of thousands of Bolivians were gassed during rush hour. Mourners were forced to abandon the coffins of their loved ones in the street as fumes overcame them.

“La Paz, 5:30 pm. They’re gassing commuters and protesters alike. Can only imagine how many people will wander into the path of the police & military with the Bolivian media’s under-reporting. I saw mothers with infants gassed, they were not part of the procession,” reported one TeleSUR journalist on the scene.

From exile in Mexico, former President Morales denounced the attack on the funeral procession. “The de facto government of Añez does not respect the dead in their coffins, nor forgive their relatives, women and children marching peacefully in support of life and democracy”, he said. “We condemn the violence against our brothers and sisters.”

Morales won an unprecedented third term in office on October 20, gaining 47% of the vote in the presidential elections. However, opposition parties cried foul, claiming that there were election irregularities, an accusation repeated by the Organization of American States and the U.S. government. On November 10, military generals appeared on television and demanded Morales resign. As he fled to Mexico, the military selected Jeanine Añez – whose right-wing Democrat Social Movement Party received 4% of the vote – as President. Añez, a strongly conservative Christian, declared that Bolivia’s indigenous majority was “satanic” and promised to bring Christianity back to the government. The White House strongly supported the events, “applauding” what it saw as a significant and positive moment for democracy. On the other hand, Democratic Presidential candidates such as Bernie Sanders and Tulsi Gabbard have condemned it.

MintPress News is covering the events in Bolivia extensively. Full coverage can be found here and on Twitter.