Bolivia’s MAS Leader: “Our Advantage Is Not To Be Afraid Of Death In Defense Of The Country”

Rodolfo Machaca is from the Political Directorate of the Movement to Socialism (MAS). During his time in Argentina to meet with Evo Morales, he gave this exclusive interview, assuring that in the face of next year’s elections, even without a definite candidate, they have “almost 40% of the votes”.

The arrival of Evo Morales to Argentina was accompanied by a massive arrival of leaders of his party, the Movement to Socialism (MAS), to meet with him and outline the policy to face the coup in Bolivia.

Among those who traveled to Buenos Aires for these days was Rodolfo Machaca from the Political Directorate of the MAS, former Deputy Minister of Interculturality and leader of the Single Trade Union Confederation of Peasant Workers of Bolivia (CSUTCB). In dialogue with NOTAS, he denounced the dictatorship of Jeanine Añez which continues to violate human rights, persecuting the population and delivering the country’s natural resources to multinationals.

However, he was optimistic about next year’s elections. He said that the MAS, even without defining a candidate, already has close to 40% of the voting preference. “We are being persecuted but there is no longer fear that they will catch us, stop us, torture us. Because we carry the blood of Tupac Katari,” he said.

– Although at first from Argentina there was important coverage of the events that occurred after the coup d’etat of November 10, has there been a decrease in the information flow about how the situation of Human Rights continues within the framework of Jeanine Añez’s dictatorship?

Except for some radio stations that are from the original towns that have been persecuted.

– Are those radios still working?

– And with respect to Human Rights in general?

Thousands have been injured and those injured have not been treated promptly. And the dead continue to add up. Nobody says anything about it, families prefer to bury their loved ones, cry and grieve.

But we are sure that tomorrow, the day after, these family members are going to protest and bear witness to how they have been attacked, persecuted and how their right to life has been silenced.

This is how human rights are in Bolivia. Some human rights representatives are complicit in the dictatorship. So we, the peoples, have nothing except the Ombudsman’s Office.

– In addition to repression and persecution, the dictatorship has attempted to advance against the conquests achieved during the process of change. What have been the main actions taken by the de facto government in this regard?

For example, the Bolivian Aviation Administration (BoA) was handed over to the Amazon company that is a private company, belonging to them. One of Amazon’s partners is the former president who escaped to the US, Gonzalo Sánchez de Losada (years ago).
Another case: when new consuls and ambassadors were appointed. These procedures should be carried out through Parliament, but they did so directly. So we can continue enumerating. The same happened with the procedures in the Ministries.

Now, the bidding and industrialization of Bolivia’s lithium that had been planned very carefully by President Evo Morales, is now in line to be cancelled. By decree they want to deliver that wealth of ours to multinational corporations.

The monetary reserves we had, the resources we had, have been used by them: their salaries, their bonuses.

All this will have fatal consequences for their group of political parties as well as for the State. They are delivering up strategic resources. It’s a disaster.

– Are social programs such as the Juancito Pinto subsidy or Renta Dignidad still valid?

– In a first stage after the coup, there was a certain disarticulation between the popular movements and the MAS as a party that was later reversed in the Extraordinary Cochabamba Assembly where unity was agreed upon for the elections. How was that process?

And another measure is to prosecute political leaders. They are looking to decapitate us.

President Evo is already out of the country; the second man of the party, Gerardo García, has been arrested, is a political prisoner; and now we are in the hands of the third head, Juanita Ancieta de las Bartolinas; and then myself, the fourth man of the party.

Right now it is up to us, but they are seeing how to prosecute us, how to initiate a trial.

But something more interesting is this: we have lost our fear. There is no longer a fear of death. They have killed our brothers, they are already more than 45 dead in the whole country. But there is no fear.

With courage, we will carry out the elections. We will defend our political party with blood.

On the other hand, the stronghold of MAS, of the political party, is the Pact of Unity: the peasants, the bartolins, the natives. They [the coup] are taking on the task of dividing and parallelizing other confederations to weaken us. But the shot is coming out of the butt. They can decapitate us but the masses, the bases, they will not be able to.

The reaction has been formidable. “Keep going,” they told us. Then with that force we are re-shaping ourselves. The meeting in Cochabamba was a surprise for them.

They slaughtered us in 2003 for being peasants, for being indigenous, for being humble, of lower class and native people. Now they want to repeat that, to continue to dominate us now as then and then laugh at us, sell our wealth, and party. What they want is to give our natural resources to multinationals behind our backs.

That will generate the suffering of the generations that follow us, they will judge us. 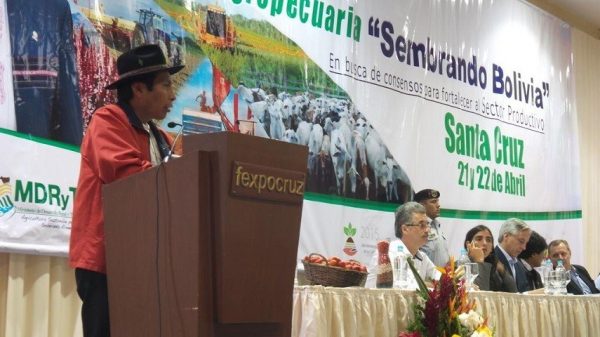 That is why we prefer to defend it with our lives, with blood. We will not let it pass. They worked us with fright, but we lost our fear. We are being persecuted but there is no longer fear that they will catch us, stop us, torture us. Because we carry the blood of Tupac Katari. We are Aymara. We are Quechua.

Only then, without raising a stick, we will face them. We come from those revolutionary roots.

– President Evo Morales arrived in Argentina a few days ago, how important is his presence here both to face the electoral campaign and to the resistance to the coup?

They have continued to accompany us. How many times have they come to Bolivia to support us, to share our joys, and in recent times, our cries, our sorrows.

For us President Evo represents our blood, our brother. We can not abandon him. He a reference, a symbol. That is why everything they have done hurts us a lot.

But we are there and that is why we come here to greet him, to reach him and to tell him that he is not alone.

Brothers, with your support we are sure that we will succeed. Evo is struggle, he is strength, he is our image and our future. There can be many leaders by your side and many more in the future. But he is like an elder brother who has brought us to the path of struggle, we cannot release him or leave him alone. That’s why our tears but our strength too. That is why our bravery to face future struggles with blood.

Take care of him, Argentine brothers and Argentine sisters. Protect my brother, I know he will be fine and that we will return to take him from here to Bolivia.