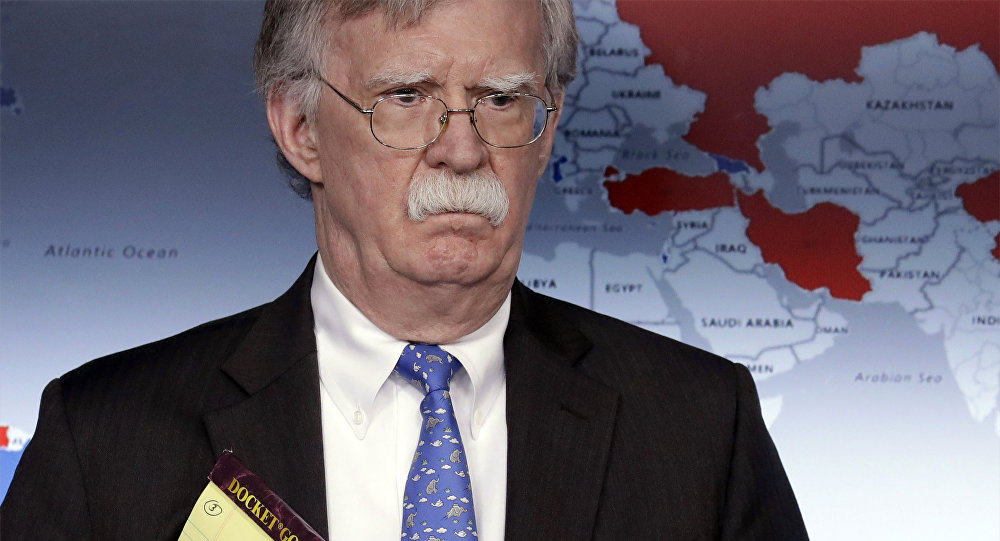 “There have been indications in the Trump administration that Donald Trump feels like he was deceived by John Bolton and [Special Envoy for Venezuela] Elliott Abrams”, Zeese said regarding Bolton’s efforts to force a change of government in Venezuela by claiming popular support for opposition leader and self-proclaimed president Juan Guaido. “In fact, the people of Venezuela support President [Nicolas] Maduro.”

Zeese noted that Bolton has also undermined Trump’s efforts to withdraw the United States from Syria and strike a deal to denuclearize North Korea. In addition, Zeese said Bolton is undermining the Trump administration on Iran as well, given that he wants the United States to go to war with Iran while Trump does not.

“And now in Venezuela, he is undermining Trump. So there’s a split in the government. I think that fissure is breaking open,” Zeese said.

In May, the US Secret Service and State Department security arrested Zeese and three other activists who had been residing in Venezuela’s embassy in Washington on the invitation of the government of President Nicolas Maduro. The activists said their goal was to protect the diplomatic facility from being taken over by the US government and given to Guaido’s representatives.

Zeese said that since the activists had left the embassy, allegations emerged of corruption by Guaido’s forces in Columbia for reportedly using humanitarian money to stay at expensive hotels, have expensive dinners and parties and engage prostitutes.

“Carlos Vecchio, the fictional ambassador who went into the Venezuelan embassy in Georgetown, is being investigated by the US Department of Justice for embezzling $70 million dollars”, Zeese said. “There’s also been a lot of indication in the media about the loss of faith in Guaido. He has failed and failed and failed to achieve his objectives.”

Zeese also said that Venezuelan opposition representatives in the United States are not using the building of the Venezuela embassy in DC after taking control of the diplomatic facility.

“Right now, the Georgetown Embassy in basically vacant. They allowed the opposition to go in and get a photo taken while they were there, but they are not using it,” Zeese said. “So, it’s an empty embassy.”

On 17 May, a US judge ordered the release of the four activists – Margaret Flowers, Kevin Zeese, Adrienne Pine, and David Paul – on the condition that they do not come within 100 feet of Venezuela’s diplomatic facilities. The activists are also required to report to the court on a weekly basis and cannot travel abroad without permission.

“The US violated international law by entering the Embassy, by arresting us, by essentially invading the embassy with military troops. That was the violation of the Vienna Convention. The US needs to correct that mistake and the direction is the mutual protective power agreement,” Zeese stressed.

“We have been urging the US State Department to agree to allow Turkey to be the protecting power of Venezuela and for Switzerland to be the protective power for the United States,” he noted. “The US wants that in Caracas, and they’ve asked Caracas, the government, to approve that. Venezuela wants that in Washington, DC, they’ve asked the US government to approve that. And that’s the solution.”

The portion of that solution, he added, is a mutual protecting power agreement, a legacy diplomatic gambit dating back hundreds of years.

“It’s incorporated into the Vienna convention, in the Geneva conventions, it’s part of diplomacy, it’s very normal. And that’s the solution to both embassies,” the activist added. “I think that this is still a viable solution, and the mutual protective power agreement will restore international law.”

The US State Department and Guaido’s representatives have not yet responded to Sputnik requests to comment.

On Tuesday, Swiss Ambassador to the United States Martin Dahinden said at an event in Washington that Venezuelan President Nicolas Maduro has not yet approved the agreement between the United States and Switzerland for the neutral country to become Washington’s protective power.

Dahinden said protective power mandates are usually approved on the principle of reciprocity.

With the US considering opposition leader Juan Guaido to be the country’s legitimate interim president, it is unlikely that Maduro will approve Switzerland’s protective power mandate.

The political-economic crisis in Venezuela intensified in January after Guaido proclaimed himself interim president in a bid to oust Maduro. The United States recognized Guaido and began imposing sanctions on Venezuela and freezing billions of dollars of Venezuelan assets.

Russia, which recognizes constitutionally-elected Maduro as the sole president of Venezuela, has said the United States is strangling the country with sanctions in an attempt cause chaos.

Maduro has called Guaido a US puppet and accused the United States of orchestrating a coup in Venezuela to force a change of government and claim the country’s vast natural resources.