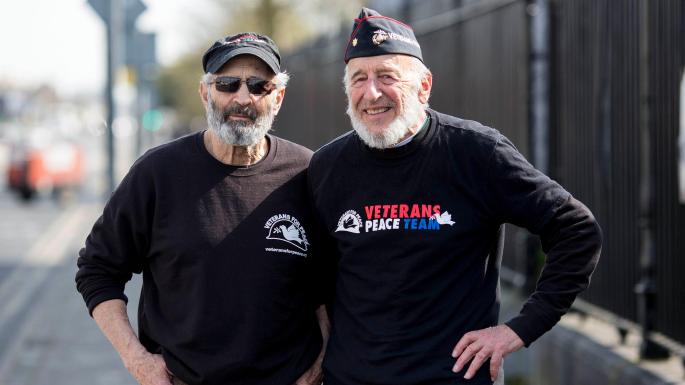 Boots On The Ground For Freedom

Above: Tarak Kauff, left, and Ken Mayers will do a series of walks to highlight their plight. By Alan Place for The Sunday Times (UK).

Note: We have been following the prosecution of Tarak Kauff and Ken Mayers in Ireland for their protest at the Shannon Air Force Base.

Ireland seems upset that the two exposed the falsity of Ireland’s claim of military neutrality. This has been a long history at the Shannon Air Base. Hopefully, Kauff and Mayers putting some light on the lie of neutrality will push Ireland to actually become neutral. That is what their people want and that would be best for the world. The courts in Ireland are abusing their power with Tarak and Ken, forcing them to stay in Ireland pending trial. Of course, they would return to stand trial as they want a public trial to discuss these issues in open court. Their trial for this minor offense could be many months away.

On September 1, The Sunday Times, from which the above photograph is taken, published an article calling for their release.

While it is good to see they are using their time in Ireland well, we hope they are allowed to come home soon as we know this is a hardship on them and their families and friends.

Here is our coverage of their case:
Antiwar Protesters, Tarak Kauff & Ken Mayers, Out Of Jail, Still In Ireland
Two U.S. Veterans For Peace Refused Bail In Ireland
Shannon Airport Case Involving US War Veterans Adjourned Until May
Two Former US Soldiers Have Been Arrested After An Alleged Security Breach At Shannon Airport This Morning.
KZ

On Saturday, Sept. 7, at 10 am in front of Limerick Prison, where they were incarcerated, Ken Mayers and Tarak Kauff, both U.S. military veterans will begin Boots on the Ground for Freedom, a series of walks through Ireland to promote peace and, as Kauff has written, “freedom to return home to our families, freedom from war, and the freedom to respect and affirm a strong and peaceful Irish neutrality.”

The two veterans were arrested at Shannon Airport on St. Patrick’s Day for attempting to inspect an Omni International aircraft they believed was carrying U.S. troops and weapons in direct violation of international law. The plane was on its way to Kuwait. Mayers, 82, a former Marine Major, and Kauff, 77, a former U.S.Army paratrooper, were remanded to Limerick Prison where they spent 12 days before being released on 2500 euros bail each and surrender of their passports. Five months later, the two peace activists are still here, but they are not silent.

“The U.S. military is using this civilian airport as a U.S. base, thereby contributing to death and destruction throughout the Middle East and North Africa. What I find particularly heart-rending is that some of this material goes to support the Saudi attack in Yemen where there are over a million people on the verge of starvation. After the starvation that devastated Ireland in the 19th century, it is particularly tragic and bitterly ironic that this nation should be complicit in the starvation of over a million people.” said Mayers.

“It’s hugely important to us here in Ireland that these two veterans did this. It internationalizes the situation. These two gentlemen didn’t commit a crime, they were trying to prevent crimes being committed and crimes being facilitated at Shannon Airport. The following day after they did their action, ten children from one extended family were killed in a U.S. airstrike in Afghanistan. According to our research up to one million children have died as a result of these wars.” Edward Horgan retired Irish Army Commandant

Clare Daly, a member of European Parliament commented, “Instead of allowing the case to go to trial, we had the judge denying them bail which is an absolute violation of human rights. It’s an appalling treatment of two elderly gentlemen, to take their passports and effectively almost interning them in Ireland. If you compare that to the treatment myself and Mick Wallace got when we did essentially the same thing, to try and exercise our public duty to do what the government won’t do, to examine U.S. aircraft to see whether the undertaking that we are told exists, if they are unarmed and not involved in any military action is indeed true. We had a trial, we were issued with a fine, which we didn’t pay and in defiance of that we were sent to prison, supposedly for a month but we served about 2 hours of that. The discrepancy in their treatment and ours is really regrettable.”