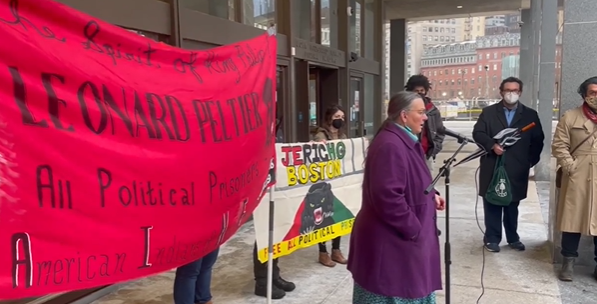 Jericho Movement Boston,  United American Indians of New England (UAINE), and Boston BDS called for a standout in front of the JFK Federal Building in Boston on Monday, February 7, 2022 at 4:00 pm to call attention to international calls to free Native American prisoner Leonard Peltier, now 77 and ill with COVID-19.

“some of you are coming from other communities with a long history of political prisoners — Black, palestinian, puerto rican, irish, many more. it’s important to bring that solidarity from your own communities to the struggle for leonard peltier.”#FreeLeonardPeltier @mahtowin1 pic.twitter.com/ZUr1dGXJPp

Known internationally as the most famous and longest-serving Native American political prisoner in the US, Peltier has been imprisoned since 1976 on charges that he shot two FBI agents on Pine Ridge Reservation in 1975. Peltier was framed up for a crime he did not commit. Witnesses perjured themselves at the behest of federal authorities, and the FBI suppressed ballistics evidence that would have exonerated him. James Reynolds, one of the main federal prosecutors who put Peltier behind bars in 1977, wrote to Pres. Biden in 2021 asking the president to commute Peltier’s sentence and to grant him executive clemency because, according to Reynolds, the government had lied, deceived, used racism and faked evidence to sentence Peltier for two consecutive life terms in prison. The late leaders Nelson Mandela and Desmond Tutu supported freedom for Peltier, as have many other people around the world.

Mahtowin Munro, co-leader of United American Indians of New England, commented that “Leonard Peltier is innocent and should have been paroled or had his sentence commuted many years ago. His ongoing imprisonment under brutal conditions violates human rights and is torture. Peltier is now 77 and the federal prison where he is held did not even give him a COVID booster shot. He has now contracted COVID-19 but is not getting proper medical care, especially considering his many health risks. He has been eligible for COVID release given his age and medical conditions. We demand that Biden commute his sentence now so that Leonard Peltier does not die in prison. Continuing to keep him imprisoned is reflective of the government’s contempt for Indigenous peoples and movements.” [@mahtowin1, uaine.org]

Jean-Luc Pierite, president of the North American Indian Center of Boston, commented that “A call for clemency for Leonard Peltier from Boston must center the need for answers to the assassination of Anna Mae Pictou-Aquash. Boston Indian Council, now North American Indian Center of Boston, exists in large part to the organizing and vision of the mother of Denise Pictou-Maloney and Deborah Pictou-Maloney. The Occupation at Wounded Knee and the Federal Bureau of Investigation’s COINTELPRO have lasting impacts on grassroots organizing locally and across Indian Country. To that end, we thank Rep. James P. McGovern and call upon the full Massachusetts congressional delegation to sponsor H.R.2998 ‘COINTELPRO Full Disclosure Act.'” [@neshoba78, @NAICOB91, naicob.org]

In a statement, The Jericho Movement Boston said, “On this rainy Monday we have come out to voice our sincere wish for the freedom of our beloved Indigenous elder Leonard Peltier, who has spent far too much of his life wrongly imprisoned. We stand in solidarity with other actions across the US and the World amplifying an urgent cry coming from the International Defense Committee and from Leonard’s own mouth. The continued detention of Leonard is nothing short of a death sentence and represents the continuation of a long legacy of injustice that is in direct conflict to the stated policies and goals of this government.” [@officialjerichoboston, thejerichomovement.com]

For more information on his case, go to: whoisleonardpeltier.info